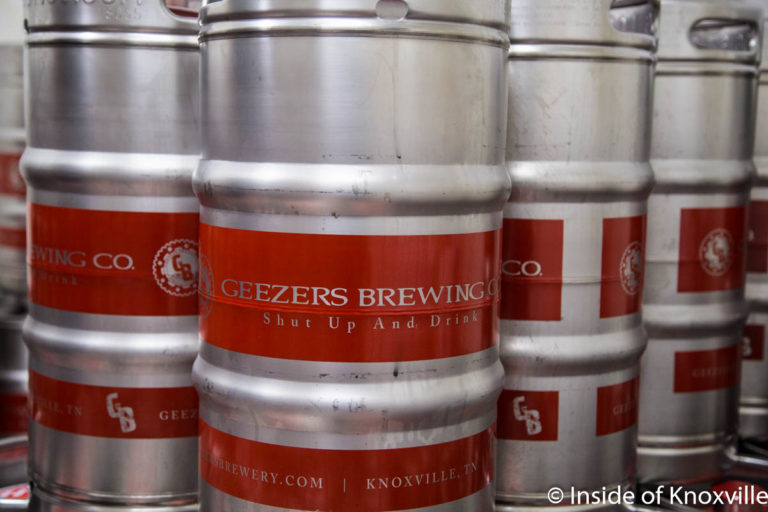 Geezers Brewery has been a growing presence on the Knoxville Craft Beer scene for years in one form or another as they’ve grown and evolved organically. Their passion for home brewing and mountain bikes, developed into a blog in 2010. That eventually gave way to a focus on the brewing and on developing a long-term vision for a brewery. The trio of owners, Jason Shields, Bob Noto and Tom Fitzmaurice, are now on the verge of launching that dream in a big way as they prepare to open a tasting room at 225 East Fifth Avenue.

Located across from Knoxville High School in an area that is becoming the most centralized spot for area breweries, the tasting room is shaping up to be an eclectic mix reflecting the group’s love of biking (you’ll see shapes of sprockets they pounded into the bar), all things local and a touch of the Grateful Dead. You’ll find local pine, harvested tin sheets, and even a bit of steampunk motifs on the wall.

It’s all fun and the group is decidedly bent int he direction of fun, but it’s also just the dressing for very serious beer making. They’ve been participating in beer festivals for a long time and using the feedback they’ve gotten there to improve their beer. They opened as a wholesale brewery last April, with their beer appearing at various taps around town. They have a regional agreement with Eagle Distributing and their beers have been appearing at Pour, Double Dogs (in Farragut), Aubrey’s and Corner Depot, among others.

The process has been a long and winding one and Tom says they’ve learned a lot as they’ve navigated the various administrative, code and regulatory hurdles. He said the trio, all of whom have jobs in Oak Ridge, made the decision to sink most of their capital into equipment that would support their long-range vision, meaning they’ve had to pace their build-out as they move toward the pending opening.

They’ll open with 14 taps and plan to have food trucks provide food. They’ve built a 15 barrel system and the fermenters are double capacity, meaning they can double that to 30 as needed. They intend to continue evolving and plan to ultimately have their own canning operation which can be accommodated by the large space they have in the basement.

Tom said they’d always wanted to have something to transition to as they approach retirement from their current jobs. As he considered possibilities he thought, “Why not create a livelihood from what you love?” Saying that working for themselves and having creative control is important, he added there is a satisfaction that comes from a project, “you’ve invested in and feel proud about. This is something we did, we built.”

The name for the business came from their time as adventure racers. They were among the older participants and when a race presented itself in which they needed a group name, they chose “geezers,” and it stuck. Originally it was longer — Sin City Geezers —  a reference to the fact that Tom and Bob had moved here from Las Vegas over a decade ago. Jason is a local east Tennessean from birth.

Of those fourteen taps mentioned above, a dozen will be devoted to beer with about half being their brand and the other half will be held for other local breweries. They’ll also have ciders. Capacity will be somewhere between fifty and seventy-five, with the hope of expanding into a beer garden in the future.

A precise opening date hasn’t been set, but the group hopes for a late summer opening, depending on a number of variables including inspections and permits. They’re doing much of the work themselves and feel good about the progress they’ve made, so they are optimistic.

When they do open, they hope to offer a place that reflects the local beer and biking communities and where everyone feels welcome. They plan to be open afternoons and evenings, seven days a week offering their flagship beers, a milk stout (“Puddin'”) and an American blonde, as well as others.