Rainbow Colors in Every Direction Under Gray Skies 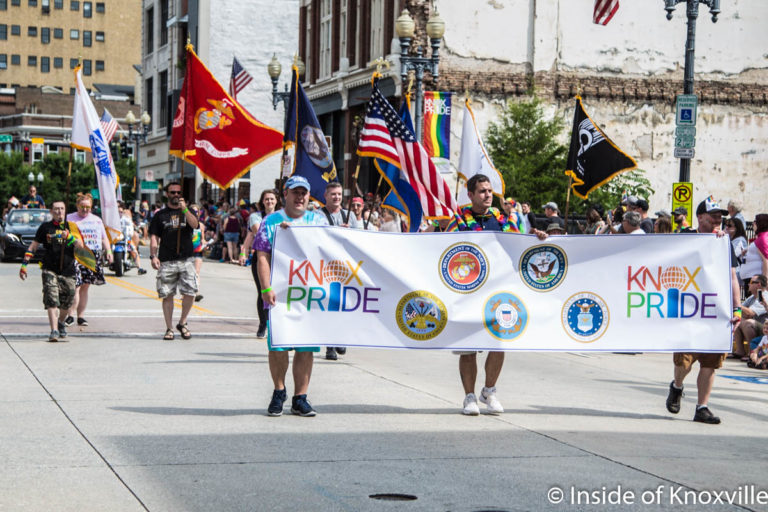 Thousands came downtown despite the threat of storms for the annual Pride Parade. Layered with special poignancy, this year marked the 50th anniversary of the 1969 riots and subsequent marches resulting from the confrontation between gay patrons and the police at the Stonewall Inn in New York City.

It also followed a volatile week in which Knoxville made the national news for the hate speech of a local minister who recently was also a detective with the sheriff’s department. His inciting of violence combined with the word that right-wing groups were busing to Knoxville put an extra tension in the air.

Whether produced by the specific threats of violence or simply as a response to the United States’ tendency toward gun violence at the hands of extremists, local police established a heavy presence from snipers on rooftops, to machine guns on the street, barricaded streets and numerous officers circulating on foot and bike.

The heavy presence of security didn’t seem to diminish the joy and exuberance of the crowd. Perhaps it helped. In any case, the crowd built into the thousands as the moment approached. It was a strikingly diverse crowd, from children to the elderly, ethnically varied and mostly everyone united in the festivity and the wash of color in every direction. It has to be the most colorful event of the year, hence the large number of photographs in this article.

And the crowd roared as the parade began. And continued to roar in waves throughout the rather long parade. With the exception of the lone protester who walked up and down Gay Street looking rather sour, joy filled the crowd. It was also obvious on the faces of those in the parade. It’s really different from any other parade. It’s hard to overstate its importance to many of the participants, as well as many of the observers.

For our family, it has always been a big deal, but this year was bigger: Urban Brother took his place in the flag corps as part of the Gay Men’s Chorus. It’s hard to express to someone who hasn’t walked it with a friend or family member, just how long the journey is for so many to arrive at this point.

It wasn’t that long ago that he and I followed the parade, only to be caught up in it to march together and cry about the journey. Don’t let the rainbows and unicorns mask the fact that there is a lot of pain along the way for many gathered for this parade.

One of the ways this was exhibited was in the presence of people wearing shirts with “Free Dad Hug,” or “Free Mom Hug,” on them. It may seem like a silly idea to some, but for particular people, to be hugged by a father or mother figure when they’ve lost all hope of ever experiencing that with their own parents, is very powerful. A male friend of mine who wore such a shirt told on Facebook of a young man who grabbed him and sobbed. Human touch means so much.

Del Shores was present in our parade this year, serving as co-Grand Marshall. It’s a big deal to have him join us. If you don’t know his series of movies (or plays) staring with “Sordid Lives,” you owe yourself a treat. Look them up and be prepared to die laughing as he offends at least one sacred cow for everyone. They are classics.

Lots of cute children lined the parade route and marched in the parade with their parents or with their church groups. As always, I couldn’t help but tune in to them and to the cute pets that joined in. A small pig stole the pet competition, while all the children were precious.

I don’t have much of it pictured here, but there were two other major presences in the parade worth noting. The corporate involvement continues to grow as Pride becomes more mainstream. Companies like Whirlpool and local businesses like Knox Brew Tours and Preservation Pub lined up along the various local LGBTQ+ and church groups. In what other context does that happen?

The other notable presence was local and state politicians. There has always been a contingent from city government and they were present. Commissioner Evelyn Gill was there, but I didn’t see anyone else from county government. It would be great to see a continent, next year. The Democrats were out in force, but I didn’t see any Republican organization. Mayoral and City Council candidates were out in force, waving and shaking hands along the way. There is no mistaking it is political season. What is striking is that we have arrived at a point where it is seen as politically expedient to be a Pride Parade. That wasn’t true just a few years ago.

There were other groups of note, as well. A group of self-identified kindergarten teachers marched and that would not have happened just a short time ago. Groups of high school students joined in. Maybe we’ll know we’ve gotten somewhere when local high school bands want to join the parade (although the time of year likely will inhibit that possibility). It’s also worth mentioning that the street, from city-supplied banners to businesses lining the route were festooned in appropriate rainbow decorations.

In the end, it was another happy parade, as best exemplified by the proposal in the street during the parade. Of course it happened at the intersection of Gay and Union. I understand the Pride Festival itself was also a success. A downpour forced a brief evacuation and the Gay Men’s Chorus sang a portion of their program in the parking garage to, I suspect, the delight of everyone present. The event resumed and finished without further problems.

And with that, another Pride Celebration comes to an end. For all the build up, it was pretty low drama. I have another hundred or so photographs that I’ll try to load onto the Inside of Knoxville Facebook Page, so watch for that. There are many more good ones.