Scooters: A Week In, What Do You Think? 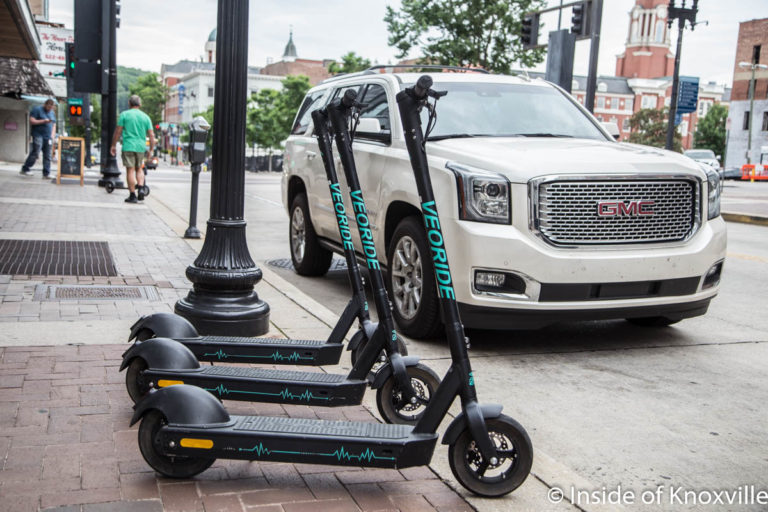 Well, we’ve had about a week of uninterrupted electric scooters in downtown Knoxville. A lot of people seem to be having a great time on the devices while social media threads and personal conversations I’ve had with downtown residents indicates not everyone is infatuated. Some people come down on both sides – seeing the fun, but also the problems.

I contacted city officials to get their early verdict and was told it’s still a bit early, but that they anticipate weekly reports from the companies involved and that they will distribute the information to media. I was also told they will look at any changes in the program suggested by the data.

When they were introduced, people within city government acknowledged there would be problems, but also noted the demand. Both the demand and the problems are on display. They were rolled out with a set of guidelines that should avoid most of the problems, but the rules haven’t universally – or even widely – followed and therein lies much of the problem.

Of course, we aren’t the only city struggling with the new fad. In England, they are basically illegal in public spaces. In Paris, pedestrian injuries and complaints have led the government to ban the transportation mode from sidewalks, expressing concern particularly for the elderly and children. The fine for riding on the sidewalk will be a hefty $150 (approximate). They also plan to develop designated parking areas and fine those who park elsewhere.

A much anticipated study conducted in Austin (where they have been available for about a year) by the CDC was recently published. They looked at e-scooter injuries in about a three month period in the city and found 271 incidents. Of those, almost half (45%) were head injuries and the study found that only about 1% used a helmet. Very striking, “Among those injured, 15 percent incurred “traumatic brain injuries.” It should be noted that the rate of injury was low (20 per 100,000 trips) and that other motorized vehicles were not commonly involved in the injuries.

My observations, all anecdotal, of course, run the gamut. I don’t know that I’ve seen anyone wearing a helmet, so the rate of helmet usage isn’t high here, either. I’ve seen lots of groups and couples having a great time. And I’ve seen people apparently in business wear (even suits) riding them and it seems that’s a good way to get quickly across downtown for a meeting without getting sweaty.

That said, my guess is that at least fifty percent of people are riding them on sidewalks. I think that might be lower than it was at first. I’ve said something to some of them and they have all expressed surprise (seemingly legitimate) that they can’t ride there. Urban Woman made me stop when a young man threatened to punch me for telling his girlfriend she was not to be on the sidewalk. Both Urban Woman and the gentleman seemed to agree I’d raised my voice a bit too much.

The concern there is the likelihood of running into pedestrians or wrecking to avoid it. I know several people with mobility issues who are now more fearful on the sidewalks. Still, the city has a rule, so what went wrong? I’m guessing the “rules” that have to be “accepted” in the app spell it out, but none of us read the fine print, we just accept it and move on. I do wish the city had put extra officers all around downtown during the roll out to specifically warn, but not ticket the riders. If we’d established it out the gate, we’d probably have had fewer issues on the sidewalks. Signage specifically about the sidewalks might also help.

Beyond the injury risk from not wearing helmets and riding on sidewalks, there are other issues. I pictured one scoot here parking precisely across the sidewalk. This was not staged. I’ve heard others report seeing them lying on their side across the sidewalk. I saw one lying in the handicapped accessible dip which would have rendered the crossing useless to someone in a wheelchair.

Then there is the issue of obeying traffic rules on the streets. Many of the riders are not doing so. Last week I was driving back into the city around 11:00 PM one night and witnessed a large, laughing group of riders cross Summit Hill on Gay. It’s a dangerous enough intersection anytime, but this time it was dark, they were moving quickly — and they ran a red light! It was hilarious to the group, horrifying to the drivers and potentially suicidal.

So what do you think? Do you think it is going well? Are you concerned? Should pedestrians point out to riders on the sidewalk that they should be elsewhere? What can we do to make this more safe or is this simply a risk that goes with modern urban fun? I’d love to have your thoughts.