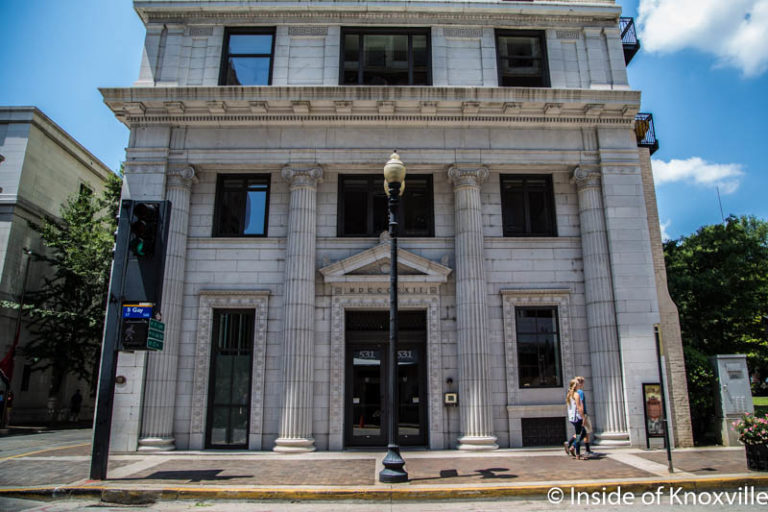 It’s been a long and twisting journey for the bottom floor of the Holston building at 531 South Gay. While the upper floors are one of the strongest success stories in downtown, having been converted from offices to condos in 2005 by a group including David Dewhirst, they are bumping $400 per square foot in recent sales. All the while, the bottom floor has languished.

I first got a look into the first floor about five years ago. It was on the market and takers were few. The potential was clearly there, but it was a big space and a complicated challenge because the rest of the building was occupied and the first floor and basement include about 8,000 square feet.

Almost exactly two years after the initial article, in July 2016, the two floors sold and it appeared the potential of the great location on Gay Street would finally be realized. Lisa and Brien Shirey purchased the space and announced plans to open a brewery and a restaurant featuring low country cuisine.

The couple opened Clinch River Brewing in Norris and appeared to have a product ready to transport to downtown Knoxville when the time came. They built a good reputation in Norris, hired a contractor for the Knoxville location and began gathering permits.

Along the way, things went south with the first contractor and another was brought in. Delays mounted, the Shireys continued to work toward making their vision a reality, but it just never came together. Other issues arose and ultimately the family made the decision to focus on family and let someone else finish the job they started.

They have sold the building to Rick and Ryan Chinn of R&R Properties out of Oak Ridge. The commercial real estate company was founded by their parents nearly fifty years ago and has been a major part of the Oak Ridge real estate terrain. Rick is currently a second-term city councilman in Oak Ridge and Ryan is a resident of downtown Knoxville. The company made their first foray into Knoxville real estate when they bought a building on Cedar Bluff and brought in Duluth Trading Company. The Holston represents their first downtown acquisition.

A significant amount of work has been completed in the space at the Holston. A grease trap has been installed, the HVAC system is in place and all electrical and plumbing has been updated. Bathrooms are studded out and the floors are simply waiting for their Tennessee marble to be polished. This work also represents rounds of permitting and approvals that are already completed.

The city has approved a main entrance (which is largely built) on Krutch Park with a massive outdoor patio measuring approximately 12 feet by 85 feet. The interior space could provide an opportunity for either one business with 8,000 square feet or two businesses splitting the space nearly evenly.

A window on Gay Street was once a door leading into the building and restoring the doorway is an option. That done, the entrance flows easily to a beautiful, original stairwell that leads to the basement which could be a perfect spot for an underground bar utilizing the safe and a couple of hidden rooms behind it.

Ryan said their company is looking for “someone who can add something different,” to downtown. Whether that is a different kind of business or a different restaurant remains to be seen. They are currently in serious conversation with one group, but are open to hearing from others. They feel they found the right spot downtown and are excited about the possibilities.

Ryan has lived downtown since 2013 and has “watched the number of people downtown mushroom.” He recalls when he and his brother attended UT in the late 90s and there was no reason to come downtown. Now he says, it is drastically different. “I think downtown helps keep people from leaving.” In the middle of that growth, he says, “We feel we got a trophy property.”

The property is being marketed through Oliver Smith Realty. Chad Turner and Will Sims helped arrange the tour for me and the conversation with Ryan Chinn. Will is the primary contact for the property. If you are interested, you may reach him at 865-208-9933.