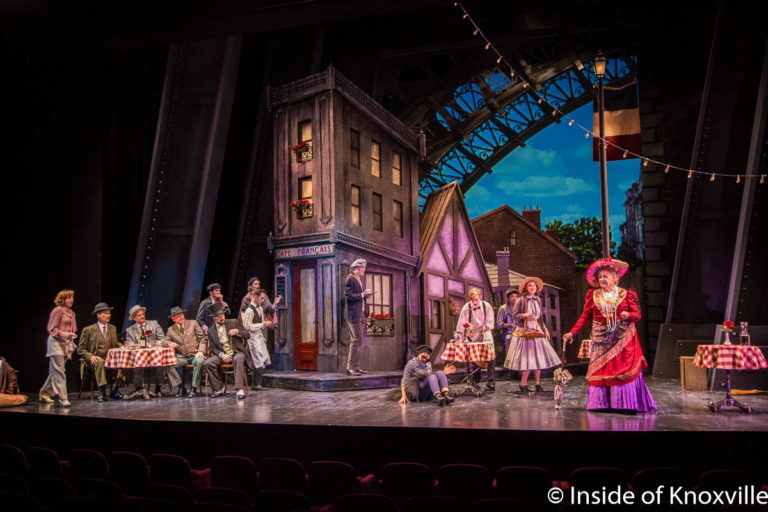 Who would ever believe a plot that involved unscrupulous businessmen attempting to make money from a source that would destroy natural beauty? In the case of the Madwoman of Chaillot, the natural beauty is actually man-made as this group of businessmen determine there is oil beneath Paris and they are determined to get at it. Money in all its glory is the highest good.

The action starts at a sidewalk cafe in the Chaillot district of Paris. Surrounded by a seeming cast of outcasts and half-wits, the group cooks up their plot. Led by the Prospector (David Brian Alley), the Stockbroker (Collin Andrews), the Baron (Brian Gligor) and the Chairman of the Board (Terry Weber) recount their evil deeds with pride while disdaining those around them who are beneath their station.

Those remnants of society love and are loved by the Madwoman of Chaillot (Carol Mayo Jenkins). She, together with them and other madwomen put the businessmen on trial at a surreal tea party and banish them forever as they are led by the smell of oil into a dark pit and joy is returned to the streets of Paris.

Written by French dramatist Jean Giraudoux in 1943, it was first produced in 1945 which was, unfortunately, after his death. The play achieved some acclaim from its inception and continues to be produced both in Paris and around the world. It ran on Broadway from 1948 to 1950 and was revived as a musical there in 1969 with Angela Landsbury as the lead, a role for which she won a Tony Award.

This production, directed by Paul Barnes, features an attractive, though simple, set and a large cast and visually interesting costuming. The bed of comedy is lightly dusted with social commentary that may work as well today as it did in 1945. Greed is greed or, as the Madwoman might see it, love is love and love wins. It looks to be another successful run for Clarence Brown and this play concludes the 2018 – 2019 season.

The play runs April 24 through May 12 and tickets are available here.