Fourth and Gill Tour of Homes, U.S. Cellular and an Image Quest 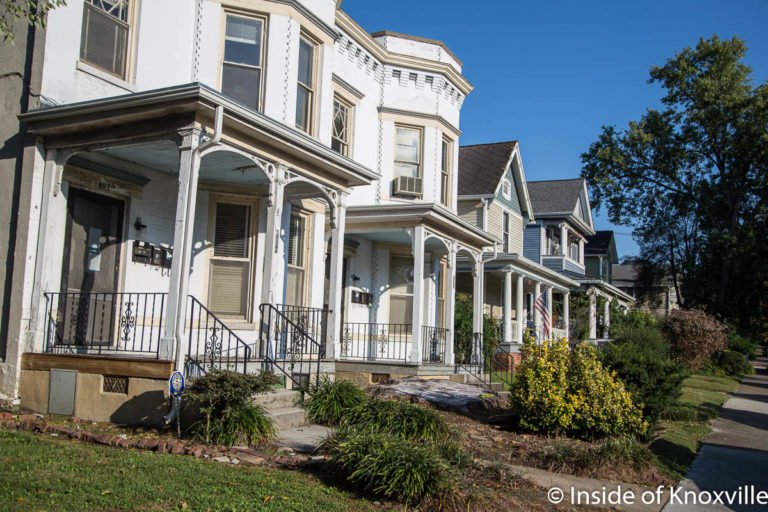 Fourth and Gill Neighborhood, Knoxville, October 2018
My job always has little twists and turns I didn’t see coming. It keeps things interesting. I hit one of those twists starting last August when I was contacted by an architectural firm that said they represented a client in need of a photograph of a neighborhood and in a web search they’d found the image above that I’d taken over four years earlier. It was almost what they wanted and they wondered if I had it in high resolution.
I had it in higher resolution, but not as high as they wanted (it was taken by a previous camera). They also pointed out that the garbage can (really a recycling bin) in the photo wasn’t really to their taste. I had a friend take a shot at Photoshopping it out, but they weren’t quite sold and wondered if I might be able to return to the Fourth and Gill neighborhood and replicate it or take a similar, but superior version.
By the time we’d sorted all that out, fall was approaching and leaves would be turning. I thought that might be pretty. They wanted green leaves. Time was running out.
So, in early October, I entered the Fourth and Gill Neighborhood on a pretty day with instructions that included getting a photograph that said, “neighbors.” In that context, they wanted several homes to be visible in the shot. They also requested that the photograph be oriented in such a way that there was space, preferably sky, in the upper right hand quadrant of the photograph to allow a display of their logo or tag line. And, of course, no garbage cans.
By the day of the shoot, the list of objects not to be included in the photograph also included cars (to make the photo era-non-specific) and people (to avoid having to gain permission). Then I realized, due to the time of the year, there were two other prolific objects in the neighborhood that would have to be avoided: campaign signs and Halloween decorations.
Arriving at the location, tripod and camera at the ready, I began to understand the parameters I’d accepted. If the land slopes down, it doesn’t matter if the row of homes are beautiful: Only the one in the foreground can be seen. If the road turns slightly? Forget getting the row of homes in the shot.
The location of the sun eliminated some shots. Hedge rows? Can’t shoot through them. The funniest moment may have been when I executed a carefully framed shot only to realize the porch of the home in the foreground featured a prominently displayed toilet. I assumed the no-go list included toilets.
In the end, I delivered the thirteen images you see here. None were perfect and I wasn’t sure if the client, which I’d learned by then was U.S. Cellular, would find any acceptable. Still, I got paid to shoot a beautiful neighborhood on a beautiful day. What a gift.
In the end they did make a selection. Which would you have chosen? All that remained was for me to see it after it was placed, a circle I completed just last week when I traveled to U.S. Cellular’s Headquarters in deep west Knox County. I expected to ask the location once I entered, but there was no need as it was the dominant feature of the reception area of the lobby. You can see it below and find if your tastes are the same as theirs.
I’ll say I was pretty proud to have my image there and the neighborhood gets a great tip of the hat as being an iconic spot that says “neighborhood” very clearly.
This Sunday, from 1:00 PM to 6:00 PM, you have a chance to tour, not only the streets of this neighborhood, but to get a look inside a few of the homes. It’s been one of our favorite annual events for years. Tickets are $12 in advance (buy them here) or $15 the day of the tour (start at Central United Methodist Church). It’s a can’t miss event.