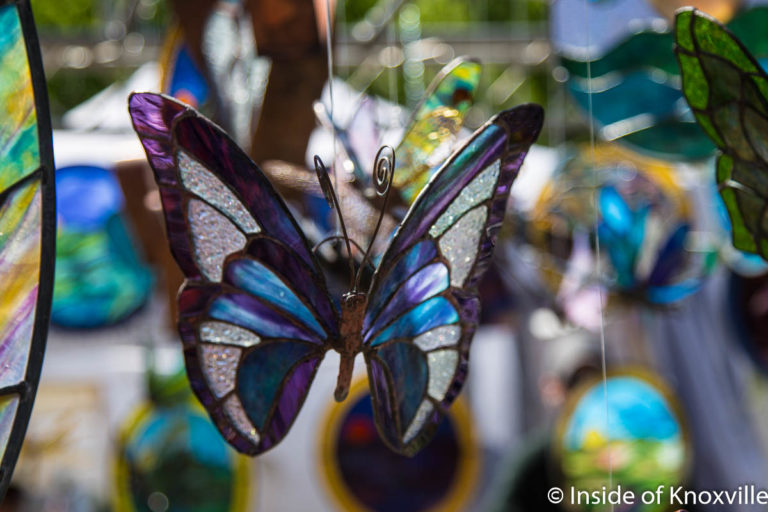 I’ve likened it to the grand finale at a fireworks show. It is a sort of final explosion in a series of festivals – though Rhythm n Blooms and a sporadic list of other festivals will have their moment in the city in upcoming weeks and months. The part of that metaphor which does not work, is the tranquil coolness of this festival. It seems a little quieter and a little more adult than some of the others.

Even that comes with some caveats. There were children’s activities in the Imagine area and entertainment directed at children, as well. There was also occasional raucous noise to be heard from the stage – all of it good. Still, it’s the festival that gets the adults out of our home and onto the square and the park for more than one round.

The crowds also didn’t seem so bad for this one. I’m not sure if it was the arrangement of the booths, the size of the footprint or if I just got lucky with the timing of my walk-throughs, but the crowds weren’t uncomfortable as they can be at some of the festivals. For the most part, we could walk comfortably and see the art.

And the art was worth seeing. As with every Dogwood Arts Festival, the artisans are carefully curated, leaving a mix of some of the very best artists from all around the region. I was told it was the largest number of vendors ever at just over 100 and they represented the usual wide range of mediums – including some I’d never seen before.

The entertainment was also good. Marlee Arden blew us away with her voice sounding like someone twice her age and her brother is a budding excellent guitar player. The Children’s Theatre of Knoxville’s Mary Poppins cast did a great job, as well. I missed a number of acts I would have like to have heard. I also thought there could be a bit more audience room for the big stage, though the rocking chairs were  a nice touch.

We opted out of the food trucks, though I heard the grilled cheese sandwiches at one of the trucks was great. We got food at Viet Tea and Bread, cooked some at home and bought doughnut  from Status Dough.

We did make a few purchases: earrings and a necklace for an upcoming trip, a platter for a gift and a vase from Pretentious Glass for our new home. The vendors I spoke to said they’d had a good weekend with sales which was, no doubt, helped by the phenomenal weather the festival enjoyed. The good weather and time of year also brought out large numbers of prom-goers. I got the shot you see here in Strong Alley. Lots of pretty younguns.

It was another great weekend for the city. We’ve enjoyed all the festivals, particularly this one, but I heard more than one person say they are now ready for downtown to regain its normal flow. With Tuesday jazz and Thursday concerts and the Market Square Farmers’ Market set to get underway shortly, it looks like that flow is coming very soon.