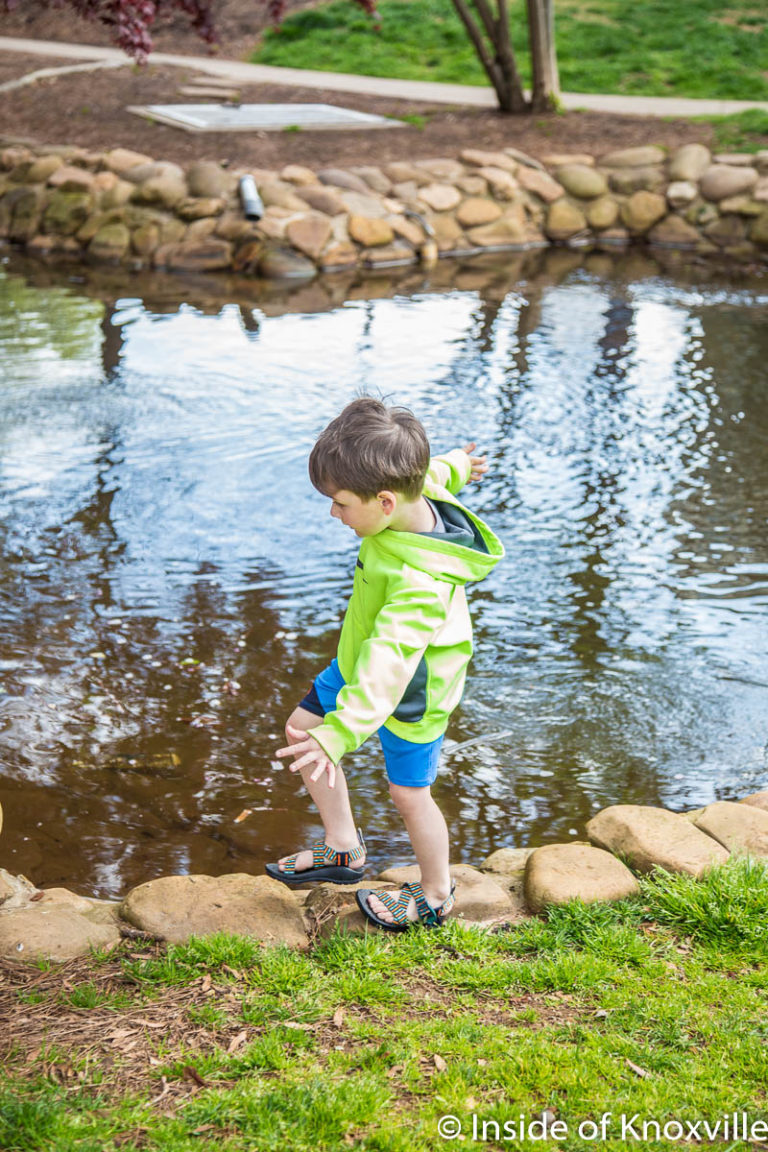 Memory is tied to all the senses: a touch on the skin, a glimpse of something familiar, a smell that transports. I have what I call San Francisco mornings. It’s something about a chill on a spring morning along with a fresh-baked smell and leisurely moments on a patio. It hits me sometimes in downtown Knoxville.

New York is on our family’s brains after our trip last fall. Urban Boy looked down a lighted up Gay Street and declared it looked like New York City (to a four-year-old). Then again, he also declared that a traffic jam on the Interstate was like New York City (it’s all about the lights).

Last Friday night as Urban Woman and I waited to cross from the southeast side of the Gay and Summit Hill intersection to the northeast side, I had my own New York Moment when I realized we were jostling with about forty people to get ready to cross and then we intersected with another twenty coming back the other way and had to step side to side to keep moving. It was like every intersection in Manhattan. It made me smile and miss the big city, but be a little proud of ours growing up like that.

We were walking to the Emporium where we heard the Gay Men’s Chorus perform a mini-set of music you’ll hear this weekend in their performance at Rossini and at their performance at their spring concerts, May 18 at the Bijou (tickets here). That was followed by a wonderful set by Vance Thompson and jazz friends with a backdrop of the great underground mural on the west side of the Emporium.

I also saw several exhibitions worth checking out (they are up for the entire month). The first was the excellent photograph of Elle Colquitt who focuses on reflections in windows. Often it’s hard to believe what you’re looking at is a single exposure, but that’s what they are. She has one of the best eyes for that sort of thing I’ve ever seen, taking amazing photographs of sights that I pass up every day.

I also bumped into a friend who said I should stop into the Dali exhibit at Rala. Imagine my surprise when I found a Dolly exhibition instead! (I really did think it was the other one and wondered what absurdist display I would encounter.) As it turns out, it was a fine showing in Rala of all things Dolly and it incorporated a judged contest. It’s still up in Rala through the month.

I also stopped into Mark Carson English’s gallery and noticed the amazing crowds at Jackson Terminal across the street. It would have been impossible just a very few years ago to imagine that old loading dock covered with people having fun on a Friday night.

After a break for some late-night sushi from Anaba back at the condo, Urban Brother and I walked to Boyd’s Jig and Reel where we intersected with my friend Oslo and heard a great set by the Barstool Romeos. One of my absolute favorite bands, it’s a very Knoxville experience when they take the stage. The night progressed through a second set and various friends taking the stage periodically until about 1AM. What a great night!

I eased into the next day hanging out in Krutch Park with Urban Boy for a quieter side of the city. The Chalk Walk, of course, blew up the city on Saturday. Even on Sunday night, I walked down Gay Street and had a hard time working through the crowds.

It was a good weekend in the city. Most of what I described is still there this weekend, along with the Rossini Festival, Cynthia Markert’s retrospective exhibition at Tomato Head (go!) and more. What are you waiting for? I’ll meet you at a busy intersection and we’ll share a New York Moment.