Magnolia: Whispers from History and Conversations for the Present 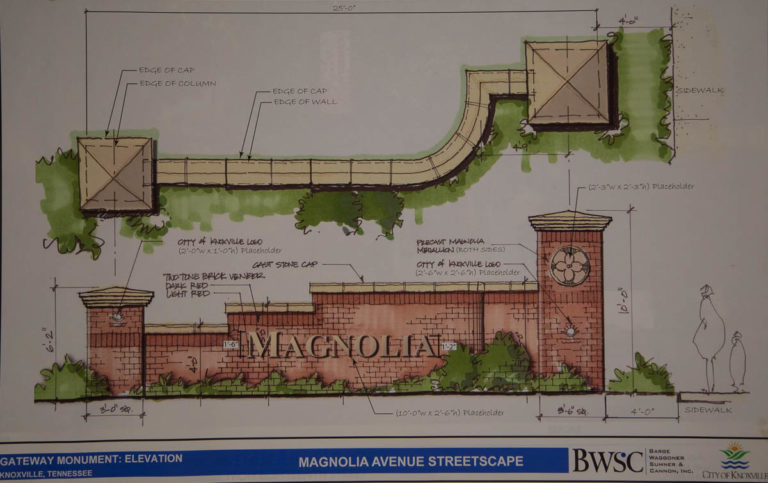 William Faulkner in Requem for a Nun said, “The past is never dead. It’s not even past.” The quote is instructive today as the United States deals with its past on many fronts. A nation whose past includes genocide of an entire race to acquire land to establish its boundaries and enslavement of another race to secure its national economy is destined to struggle with the aftermath for, as it turns out, centuries.

On a local level, the past has met the present recently in the form of online outrage and social media consternation over the engraving of the name “Magnolia” on a monument which will serve as an entrance to east Knoxville. As is often the case, social media tends to offer more heat than light. Honest conversations featuring conflicting views rarely lead toward consensus or, even more modestly, respectful disagreement.

For this reason, I asked Arin Streeter to frame the argument for omitting the name “Magnolia” from the monument and then I asked city officials to explain their position in the hopes of adding a little light to the situation. We may not agree, but perhaps we can more closely approximate respectful disagreement.

Arin is an architect with Brewer Ingram Fuller. He is known by neighbors for his exacting research into Knoxville’s history, in the form of house histories for the Fourth and Gill and Old North Knoxville home tours, interpretive signage on the devastation of Urban Renewal at the Mabry-Hazen House Museum, and documentation of the works of George F. Barber.

Here’s Aaron’s perspective, based on the historical context:

The grand boulevard named Magnolia Avenue was completed in 1888, linking a disconnected network of earlier streets – west of first creek, it had been known as Park Street; east of Bertrand, through the old Shieldstown settlement, it had been named Craig Street. Wide and modern, the new boulevard replaced old Rutledge Pike, now McCalla Avenue, as the main eastern route out of the city of Knoxville. The name “Magnolia” was given to the new street in honor of Mrs. Magnolia Branner, mother of former mayor of Knoxville H. Bryan Branner. At the time, she occupied an impressive mansion sitting upon an 8-acre lot on the south side of Magnolia Ave., east of Myrtle Street.

Magnolia Branner had arrived in Knoxville with her husband George in 1859, purchasing the old Shields Octagon House east of the city. Both were from exceedingly wealthy plantation families, and had landholdings in Georgia, Mississippi, and Louisiana. Other Branners, notably George’s brothers Benjamin and William, also moved to Knox County, purchasing large tracts of land.

Interestingly, Magnolia Avenue is not the first thing ever to have been named after Magnolia Branner. The New York Times reported on July 18, 1855, that the steamer “Magnolia Branner,” built in Louisville just the year before, while en route to New Orleans on the Red River, caught fire and sank, taking with it 1,074 bales of slave-picked cotton.

Because the fortunes of the Branners were inextricably tied to slavery. The Thomasville Georgia “Watchman” on June 21, 1854, carried a notice from J.A. McLendon, acting as agent for George M. Branner, offering a $30 reward for the return of the runaway slave “Warner, thirty-five, yellow complexion, and a good painter.” Warner had been bought from Peter E. Love and had a wife at Simon D. Hadley’s. Indeed, George Branner cited as one of the inducements to relocating to Knoxville the “great speculation in negroes” in Louisiana driving up their prices.

Most people probably don’t know that in the old property records of every county in the South, amongst the careful records of property transfers and loans and indentures in the heavy old deed books, are matter-of-factly interspersed, written in the same careful handwriting by the same county clerks, the terrible records of the sale of slaves – men, women, children. They were, after all, property, just like anything else, and very valuable. Given the brief span of time between George and Magnolia arriving in Knox County and the Civil War, there are no records of slave sales by either of them here. There are, however, records of George’s brothers Benjamin and William each trafficking in children and adults in Knox County. Attached are copies of these “property” deeds; the handwriting is old-fashioned and sometimes difficult to decipher, so the text is transcribed below:

Rec’d of B.M. Branner twenty three hundred dollars, in full payment for four negroes. Boy Chelson, his wife Fillis or Easter, and their two children Mary & Peter. All aforesaid negroes I warrant to be healthy, sensible, and sound Slaves for life. I further warrant and defend the title of said negroes, against all claims whatsoever. Given under my hand and seal January 12, 1859.

Branner to Humes and Humes to Branner

Know all men by these presents that we William A. Branner and William Y.C. Humes of Tennessee have this 31st day of July 1860 made the following barter and exchanges to wit: the said Branner barters, exchanges and transfers his boy Charles of about the age of 14 years to W.Y.C. Humes and also pays to him the sum of one hundred and twenty-five dollars, the receipt whereof is hereby acknowledged in consideration whereof the same Humes barters, exchanges and transfers to the said Branner his negro boy Frank of about the age of 15 and they mutual warrant said Boys to each other as slaves for life, sound and sensible, and they mutually warrant the title to said Boys against the lawful claims of all persons.

Why is any of this relevant now? One of the stranger aspects of the Magnolia Streetscapes Project currently being undertaken by the City of Knoxville is the intended “rebranding” of the whole area as simply “Magnolia” through the construction of a 25-foot, $68,000 monument sign. Despite efforts by members of the community to make the City aware of the problematic nature of this name, first privately, then a little more publicly, the City has proved intractable. Residents suggested a simple solution – the area has already had a name, “Park City,” for a hundred years, so why not simply exchange eight letters, not yet even installed, for a different eight letters — “Park City” instead of “Magnolia.” Inexplicably, the city has arranged meetings with concerned members of the community only to tell them that it will not be changed.

History is complicated. We obviously can’t change the name of everything in Knoxville with any connection to slavery – Washington and Jefferson Avenues would have to go. And Jackson Avenue. And Monroe Street. And Polk Street. The distinction here is the newness. A new monument, a new name for a sweeping area.

Magnolia Avenue has also been, since the 1920s, “General Robert E. Lee Memorial Highway,” but no reasonable person would suggest building a brand new monument in Knoxville renaming an entire neighborhood “General Lee,” claiming ignorance. By that same token, it’s unconscionable that in 2019 we’re building a huge new monument plastered with a name rechristening the heart of East Knoxville after a matriarch of one of the South’s most prominent slaveholding families.

Please write to Mayor Rogero and your City Council to let them know that this is important to you.

For an insight into how our elected officials feel about the matter, I reached out to to several and got responses from some of them. I also asked Bob Booker, noted local authority on African-American history in Knoxville. He said he had “absolutely no opinion!” He said he’s lived within three blocks of Magnolia Avenue for all but three of his eighty-five years and all he wants is for the orange cones to be removed from his pathway. A little levity might be warranted.

I received a statement from Councilwoman Gwen McKenzie who represents the district, who said, “I’m very familiar with this topic and do not support the petition to have Historic Park City listed as it brands Magnolia Ave as such and there are other communities and residents in that area who do not feel it is fair to identify one neighborhood on the Streetscape marker.”

Councilman-at-large Finbarr Saunders pointed out simply that he’s ,”always known this as Magnolia Avenue.  I have always been aware of the Park City area without knowing the area that encompassed.”

My husband and I have lived for over 12 years in our beautiful home, which is almost 100 years old, on Linden Avenue in the historic area known as Park City, one block off of Magnolia Avenue. I strongly disagree with the City’s effort to rename Park City after one of the avenues that runs through it.

It is unacceptable for a few individuals in the City Mayor’s office – none of whom live in Park City – to decide they want to rename it . . .

The origins of Park City date back into the 19th Century, and it was incorporated as a Tennessee municipality in 1907. Then, in 1917, the city of Knoxville annexed Park City – not Magnolia.

To change the name of Park City negates this area’s considerable economic, cultural, and educational contributions that are inextricably connected to the historic significance of this community and its relationship with the rest of Knoxville.

I also spoke at some length with City of Knoxville Redevelopment Director, Dawn Michelle Foster. She has directed the city’s efforts to revitalize the Magnolia Avenue Corridor which she pointed out was first published in 2009. The intent of the city’s efforts, she said, is to help produce future investment.

“We respect the historic integrity of all the communities,” she said, noting efforts along the corridor such as the facade program, rezoning efforts and the historic preservation which the city has supported. She also pointed out that there have been several iterations of the streetscape plan and the monument, some of which have been mandated by TDOT which controls the state highway. One iteration, which featured columns on each side of the street, for example, was vetoed by TDOT.

In response to community complaints about a parking lot on Magnolia which had been purchased by KAT, the city chose to locate the monument on that side of Magnolia to, with one stroke, satisfy TDOT and address some of the community concerns about the parking lot.

That said, she pointed out a middle way: the monument designating the corridor doesn’t need to be, nor is it intended to be the end of city efforts in the area and communities such as Park City can be acknowledged contextually in other ways. The two aren’t mutually exclusive and her department, she said, is consulting with the Knoxville History Project in an effort to find ways to mark and celebrate the history of the communities through which Magnolia traverses.

No matter what happens, everyone will not be happy. The only question is what we do with those feelings going forward. We have to acknowledge that the relationship between the city and this area of town is fraught with historic conflict, some of which is much more recent than that discussed above by Arin.

Hopefully, we’ve entered a better era in which dialog early in the decision making process and throughout can produce better outcomes for everyone. It’s important that we are able to trust each other, disagree and move forward. It’s an elusive hope. As Faulkner said, “The past is never dead. It’s not even past.”