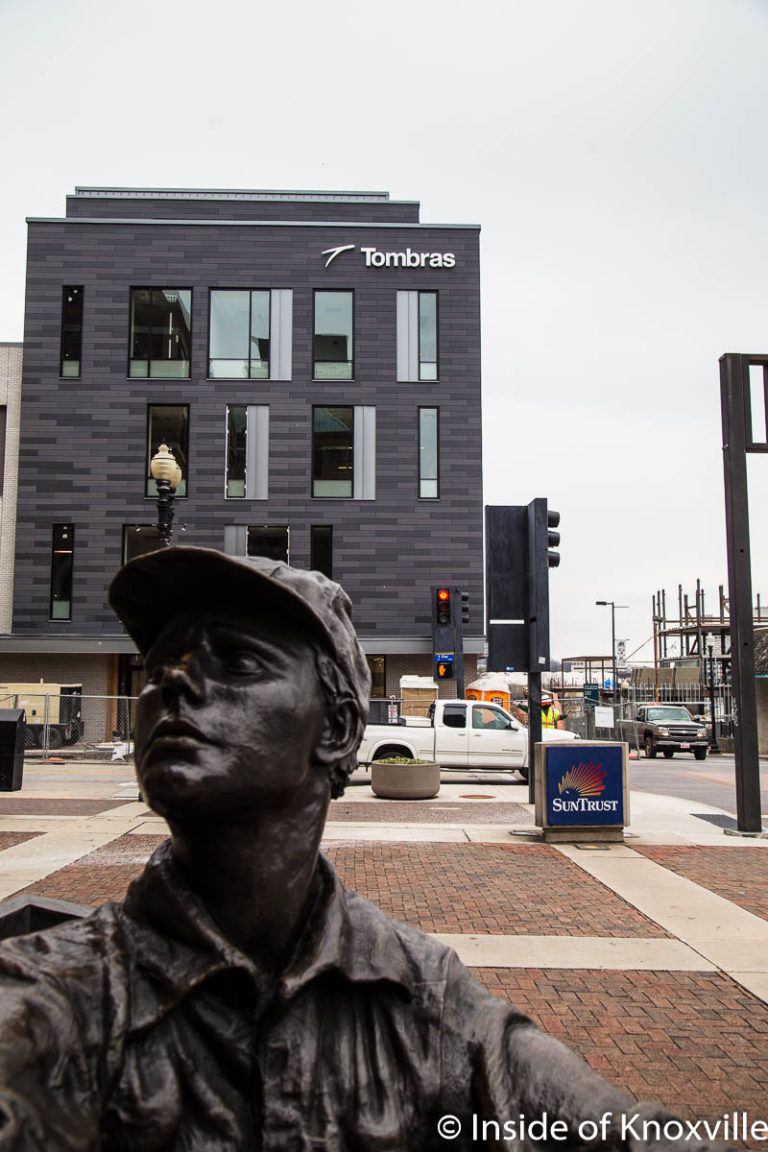 As always in recent years, a large number of the nominees and winners involve downtown projects about which I’ve written, recognizing the owners, architects and others for their improvements to and beautification of public spaces.

The “Redesign/Reuse” category was one of the most competitive as we’ve had a massive number of great re-use projects as downtown, particularly, experiences a surge in re-development. There were seventeen nominees in the category and eleven fell into the downtown or near-downtown area I cover, including, Knoxville High Senior Living, Loch and Key Productions, The Tombras Group, The Press Room, Kefi, Cumberland Avenue Corridor Project, Hyatt Place, The Mill and Mine, Maple Hall and The Parlor, KYBRA Athletics, Bliss/Tori Mason Clothing Store and Cruze Farm Ice Cream.

An interesting note from that list of projects is the overlap. Sanders Pace Architecture design several of these projects, the Klonaris family owns two and Dover Development is behind two of them. It’s hard to compare such a range of projects, but several of these are particularly beautiful improvements to their buildings or spaces. The Tombras Group (Sanders Pace Architects) won the category for the amazing improvements to what had been an empty downtown building for years.

There were nine nominees in the Outdoor Space category and, if you consider the UT campus to be near downtown, all of them fell into the downtown/near downtown category. The nominees were the Dogwood Elementary Nature Trail, UT Volunteeer Blvd. Streetscape, Cumberland Avenue Corridor Project, Central Filling Station, Hyatt Place Rooftop Bar, The Mill and Mine, Waterfront Drive, Jackson Avenue/Old City Redevelopment and the Mabry Hazen House.

Two winners were announced for the category, with a nod being given to both the Cumberland Avenue Corridor Project and the Hyatt Rooftop Bar. It’s hard to imagine two more different projects. The sprawling nature of the Cumberland Avenue Project makes it hard to ignore and the aesthetic improvement is inarguable. The Hyatt Rooftop Bar was also a great addition to the city, giving the highest perspective to date that the public can routinely enjoy.

There were five nominees in the community garden category and only one was downtown. The Chistenberry Elementary Outdoor Classroom won the award, making it the only award to go completely outside the downtown area.

The nominees in the New Architecture category were all outside the immediate downtown area except for one, the Ken and Blair Mossman Building, which is on Cumberland Avenue. It shared the award with KCDC’s Five Points Phase Two development.

The nominees in the Public Art category were all downtown with the exception of the Karns Mosaic Mural at the Karns Senior Center. The downtown nominees included the Firefly Mural on the Clinch Avenue Pedestrian Ramp, the KNOX Letters at the Knoxville Convention Center, the State Street Garage Sculpture, Gay Street Viaduct to Jackson Avenue Steps, and Right Angle Reply (TallGrasses) at the Knoxville Botanical Gardens.

The winner was the very cool new Firefly Mural with the quote from Cormac McCarthy. Robert Felker is the artist and the quote was selected by R.B. Morris. My photo pre-dates its completion. Get by there and take a look. It’s really a cool complement to the city.

The nominees for most improved/beautiful restaurant/cafe/brewery were scattered all about the city. The winner is the incredibly gorgeous and sophisticated Kefi restaurant in the Old City. Have dinner there and you’ll not only enjoy the food, you’ll feel like you’ve been to a special place. I’ve heard it repeatedly compared to New York restaurants.

The final category was environmental stewardship and the award was shared by a west Knoxville office building for Gastrointestinal Associates and downtown’s Knoxville Convention Center.

UT Gardens were recognized for their long-term work with the Mary Lou Horner Beautification award and The Felicia Award recognizing personal commitment to the goals of the organization Tom Salter, KKB’s executive director from 1997-2007.

Keep Knoxville Beautiful was founded in 1978 and has as its mission “to promote a cleaner, greener, and more beautiful community.” In addition to educational efforts they sponsor murals, litter pickups (nearly 70,000 pounds last year) and much more. They rely heavily on volunteers and if you’d like to help out either through volunteering or making a donation, you can do that via their website.

In the meantime, please encourage those who make our city a more beautiful place, and congratulations to all the winners.