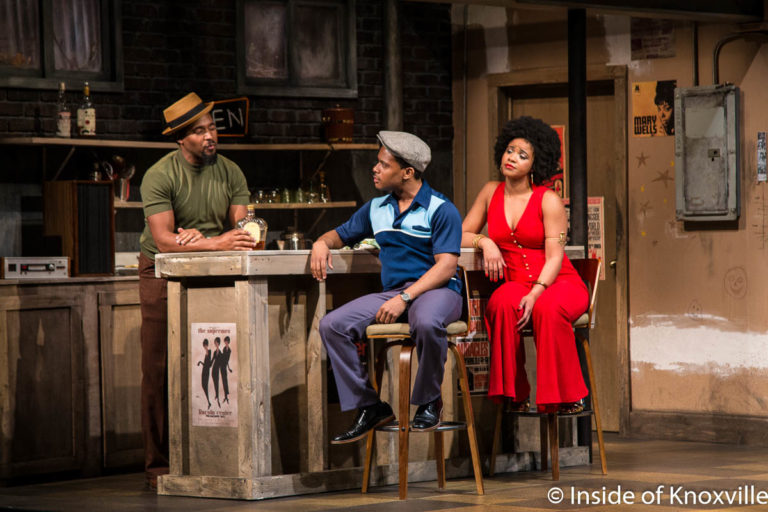 As I walked down Gay Street last night, I heard a song from 1968 blaring from a car window and looked up to see a roughly twenty-year-old young woman singing along to each word. It was a hit about thirty years before she was born. Thirty seconds after she passed, a cyclist, also in his twenties, rode by singing the same song he’d, no doubt, heard through her window. I walked into my home with the strains of “Hey Jude” reverberating through my brain.

How is it that music from that era continues to transcend generations? And it’s not simply the Beatles, of course, it’s Motown with the Supremes and Temptations and it’s Atlantic Records with its more aggressive sound and artists like Aretha Franklin and Wilson Pickett. It’s against a backdrop of the sounds of Motown that “Detroit 67,” is presented by Clarence Brown Theatre at their more intimate Carousel Theatre.

The play by Dominique Morisseau isn’t simply about music, however. Those cool rhythms were accompanied by some honest and difficult self-examination for our country during that era, and the play confronts those themes, from the Vietnam War and the damaged veterans who returned, to the economic uncertainty and disparity along racial lines in this country, to the violence we seem to embrace as a culture.

Chelle (Dee Dee Batteast) is a single mother living in Detroit and trying to make life better for her son who is attending Tuskegee University. She’s carefully guarding her small inheritance from her parents, but her brother, Lank (Gerrard James) wants to use the money to purchase a bar and to lift them from the black market where they operate a speakeasy in their basement.

When Lank and his friend Sly (Jade Arnold) bring a batter white woman, Caroline (Brittany Marie Pirozzoli) into their home, the entire group is jeopardized, but see no option to helping her recover. While the themes are serious, the music adds fun, as does the character of Bunny (Aleah Vassell) who is simply out to have fun and take care of herself.

Dominique Morrisseau is from Detroit and has written nearly a dozen plays, three of which for a Detroit trilogy. Detroit ’67 is the first in the trilogy and it won the 2014 Edward M. Kennedy Prize for Drama Inspired by American History. Ms. Morrisseau is the recipient of the MacArthur Foundation “Genius Grant” for 2018.

The play will only be produced for a 2 1/2 week run and two nights are already sold out, so if this sounds like your kind of play, you’ll want to act quickly to secure tickets. This play may not be your best option for a fun night to take the children as some of the content may be better digested by mature audiences.