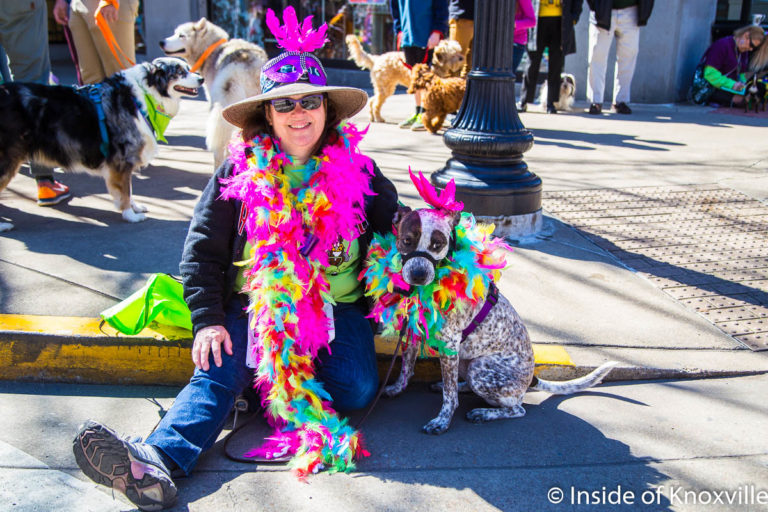 It’s that time of year, again, and, as usual, definitions of when festival season starts and what constitutes a festival will continue to bedevil the effort to make any kind of coherent list. I also tend to think of Festival Season as a spring thing, but here we are in a rainy, warm, late February and the first festival is this weekend. That’s right, it’s Mardi Growl time in Tennessee! Let the festivals begin!

Mardi Growl, is this Saturday, March 2. The 12th annual parade starts at 11:00 AM on Willow and winds through the Old City before heading south on Gay Street to Market Square where festivities will continue though 3:00 PM with all things canine (60 vendors). All of it benefits Young-Williams Animal Center, including the Mardi Growl Cajun Crawl, organized by CBID and Visit Knoxville, in which downtown restaurants are offering Mardi Gras themed dishes and drinks throughout this week.

A couple of weeks later, the Women in Jazz Jam Festival returns for its fourth year, starting Friday night, March 15, at the Knoxville Museum of Art’s Alive After Five Series and a performance by the Women in Jazz Jam Festival Band, starting at 6:00 PM. The festival continues at the Emporium on Saturday from 5:30 PM – 9:00 PM and features headliner Beverly “Guitar” Watkins. This also begins the inevitable Festival-Overlap-Effect which hits any city with a million festivals and fewer weekends, as the third annual St. Patrick’s Day Parade and Cel-O’Bragh-tion returns that same Friday and Saturday with a parade and events on Krutch Park.

The following weekend, we go “big,” as in Big Ears Festival 2019 which runs from March 21 – March 24 and features dozens of musicians, fifteen full-length films, performance art and such unique experiences as a twelve hour drone that runs all night and this year spotlights ECM records. Some events will be free and public, some available as a stand-alone ticket and others require the festival pass. This is the festival that puts Knoxville on the international map.

The Covenant Health Knoxville Marathon, which is actually an entire family of races and events spanning two days, hits on March 31. Always an inspirational event, it’s nice to have a separation between it and Big Ears which overlapped last year.

April is always a big month, but one of the signature events, Rhythm n Blooms, has been moved to May (Remember how bone-chillingly cold it was last year?). Still, there’s plenty to be festive about in the month.

Celebrating music of all sorts, but also featuring music of a particular sort, the eighteenth annual Rossini Festival and International Street Fair is presented April 13 by Knoxville Opera. Featuring multiple stages and opera along with choral, jazz and other music, it also features dance performances throughout the day, great smells from all the food vendors and wine and beer sales on Gay Street, which is shut down for the event.

April also features Knoxville’s traditional signature festival: The Dogwood Arts Festival. Actually a featuring a lengthy list of events starting in February and running through April, two weekends highlight the festival downtown when the annual Chalk Walk (April 6) brightens up Market Square and the Dogwood Arts Festival on Market Square (April 26 – 28) dominates a weekend with everything art related. It’s a can’t-miss weekend for anyone who loves the arts and the city. Be sure to go to the main site above and check out all the other great events scattered over greater Knoxville and a three month period.

If you want a bit more of a bucolic festival to enjoy which in the city, but feels like you’ve gotten away, be sure to check out the nineteenth annual Earthfest celebration of Earth Day. It will be held at the lovely Knoxville Botanical Gardens on Saturday, April 20 from 11:00 AM – 5:00 PM.

The big takeaway for me is that April becomes much  more pleasant with the move of Rhythm n Blooms to May. It allows the Chalk Walk to be the only festival event when it happens and Earthfest is not head-up with Dogwood Arts, which may allow me to make it to Earthfest this year.

As far as I understand, there will be no Biscuit Festival again this year. That leaves May a little more free and opens the door for the move by the sprawling musical feast that is Rhythm n Blooms. This year’s version runs May 17 – 19 and features headliners Tyler Childers, The Black Lillies, Tank and the Bangas, Lukus Nelson and Promise of the Real, Dawes adn My Brightest Diamond, along with dozens of other performers in venues large and small. With various panels and other special events mingled in, the festival runs from Friday afternoon into the night on Sunday.

Children get their turn with the return of the Knox County Public Library’s Children’s Festival of Reading on May 18. The day-long festival features children’s and young adult authors, story-telling and much more. Unfortunately, it is the same weekend as Rhythm N Blooms, which may force some to make a choice.

May also marks the beginning of several ongoing events which, while not technically festivals, feel that way at times – and they are long running, marking spring and early summer as much as any single events. The biggest is the annual return of the Market Square Farmers’ Market to the heart of downtown. It resumes its regular spot on May.

Also resuming a regular schedule during the month of May will be the Concerts on the Square series featuring Jazz on Tuesdays from May 7 and a variety of genres on Thursday nights starting May 2 on Market Square. And considering a move downtown or just curious about where all those people live? The answer to that is the annual City People Home Tour.

While June might be expected to reveal a slowing of the pace, with children out of school and the lazy days of summer beginning, it really doesn’t slow much for Knoxville Festivals. It starts with the fourth annual Bike, Boat, Brew and Bark event that celebrates all the things we love about the city. The Big Kahuna Wing Festival has moved to September, but Pridefest (with a Parade on Gay Street and Festival at the Coliseum lawn) is June 22 and, happily, there is no overlap this year with the USA Cycling Championships.

In July, we do slow down a bit on the festival front while we continue Jazz on the Square and the Market Square Farmers’ Market. There are a couple of notable exceptions, with our annual July 4 celebration on the World’s Fair Park and the beginning of the wonderful Shakespeare on the Square series.Also, perhaps spotting the opening, the Beer, Bourbon and BBQ Festival has moved from May to July.

The festivals continue a bit through August and into the fall. The Asian Festival highlights August each year (and has moved to the WFP this year) and the second annual Second Bell Festival at Suttree Landing Park promises to be even better than year one.The Hola Festival owns September and brings most of our festival action to a close, as Knoxville’s attention turns to a certain local sport.