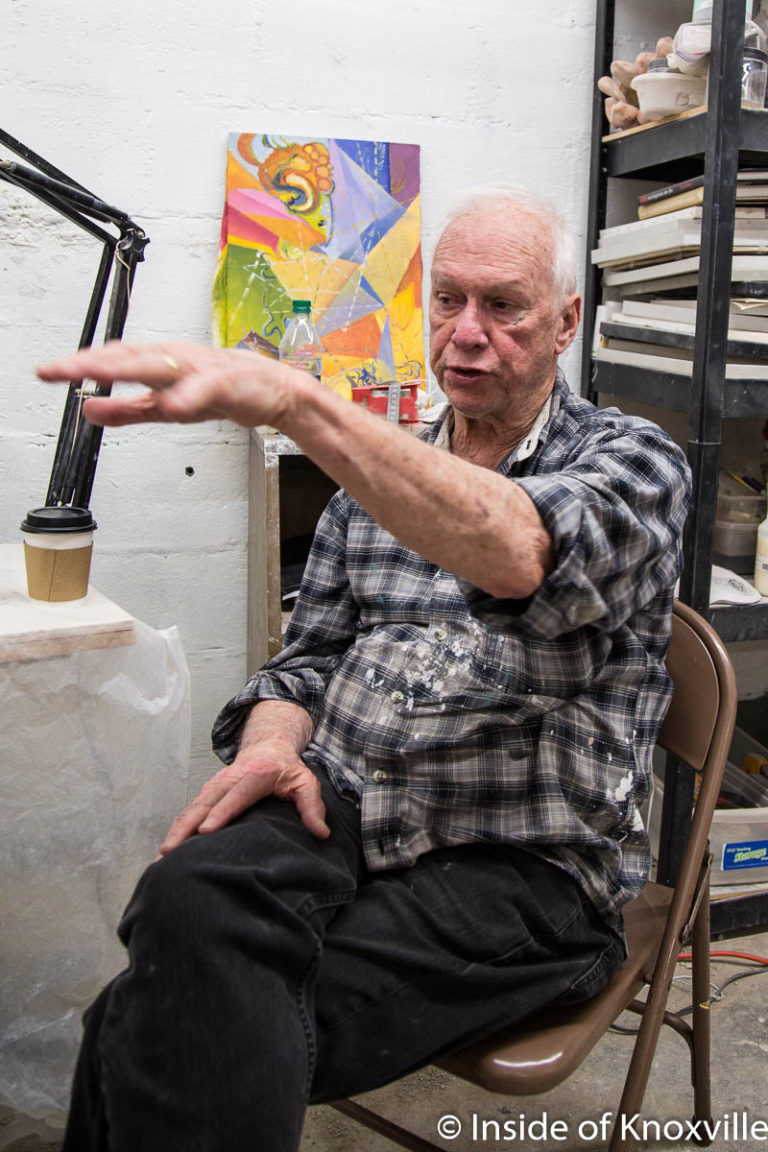 It’s a measure of a person that when the topic is that person, the topic turns immediately elsewhere. I stepped into John Malcolm McRae’s studio at Mighty Mud to talk about his work and his career. He naturally and easily turned the conversation to his children of whom he is very proud and his wife of nearly fifty years, Sharon, who died a year-and-a-half ago.

His son, Shane, is an actor who John proudly reports has never had to wait tables because he’s always had acting work. He’s currently part of the cast for the hit Amazon Prime series, Sneaky Pete. John’s daughter, Kelley, is an accomplished singer and songwriter with a number of album releases and another to come soon. His son Ryan is VP of of Sales for Atlantic Magazine.

John retired last summer from UT’s College of Architecture and Design and notes that he spent most of his career, nearly fifty years, in academia. He’s still teaching one class and that class keeps him busy because it involves field work in Haiti and in a remote county in Kentucky.

The work in Haiti began with a Haitian friend, Jean Thomas, he’d known for years when the earthquake hit that country. John asked what he could do to help and his friend replied that he could build a school and a road. They built the school in a small town about seventy miles from Port-au-Prince. He and students have continued to work there since, doing the design work while local people do the construction. He’s gotten others, like Preston Farabow, in the Knoxville community involved in the project and they’ve built housing and will soon have a preschool erected.

The work in Clay County, Kentucky, began in 2013 with a cross-disciplinary, $1.3 million grant including the UT School of Nursing. They also got private money to begin working on infrastructure and education on disease and water in the county that the New York Times described as one of the most difficult US counties in which to live. Prefab construction happens in Knoxville and is transported there for assembly. They built a water kiosk that included 40,000 pounds of materials which they built in one week with the help of Justin Paulk.

I finally turned the conversation to John who told me he was born in Vicksburg, Mississippi and grew up in the state, though he spent extended time in Evanston, Illinois. He pointed out that his grandfather had over 10,000 acres in the delta but lost it all in the great flood of 1929.

He attended Ole Miss for a year before transferring to the University of Texas, where he got his architecture degree and then attended Rice University for his graduate work before moving to Gainesville, Florida where he worked for the University of Florida for twenty years, from 1967 to 1987. That’s where he met and married Sharon.

He returned to his roots, working at Mississippi State University from 1987 to 2001 and that’s where his children grew up. He left his tenured position there to work as Vice President of RTKL Associates. He started work at their home office in Baltimore six days before September 11. He says his son Shane watched the towers fall from a rooftop in New York City where he was attending NYU.

Two years later RTKL reduced staff and John went to work for the American Institute of Architects as Vice President for Research. In 2005, the University of Tennessee invited him to apply for the Dean of the College of Architecture and Design. He took the position for six years before deciding in 2011 to return to teaching to end his career as a professor.

His artistic endeavors began at an early age. He drew and painted. His father was a civil engineer who supported John’s art, but when it came time to select a career, his father suggested the more practical route of architecture. A decision that leaves John no regrets. He continued art as a side pleasure, eventually taking a ceramics class and shifting his focus to that.

I happened to attend and document his first solo show at Paulk and Company in 2014 and, as we talked, his second solo exhibition was being planned for Knoxville Soap Candles and Gifts for this Friday, February 1. He’s worked with a number kinds of ceramic sculptures, but it is his female torsos for which he is best known. I asked him how that got started.

He laughed and said it was his wife that suggested he begin working with the feminine form. Living in Gallery Lofts downtown, they had a large credenza on which they kept two large torsos they’d been given as they left Mississippi State. As he searched for a new artistic diversion, she suggested he try his hand at torsos.

His early work was from photographs and drawings and began as less realistic, but became increasingly realistic with time. As word spread of his work, women began to ask him to sculpt them and he photographed them and began work, sending them photographs of the work. Word has spread further and he’s had requests from around the world. He said he always begins with the body and adds the clothing or drapes if he’s using those.

He says the nuance of making a specific face is very difficult, so he focused on the body. He loves to study the great sculptors as he attempts to determine how they capture the essence of their models. He’s seen a shift in women’s expectations of his work from the desire for an idealized image to one that is more honest and direct.

Women want to show who they are. Many express feeling empowered after the process. I have been very thoughtful about how I go about my work. I want to do what I know to do in the best, most appropriate way possible. I try to be consistent, honest and fair in what I approach.

He’s donated work to raise money for breast cancer organizations included Breaststrokes. He says that he’s had women request sculptures before having a breast removed and some who have done so after having a breast removed. For some it is an important statement of who they are and of claiming that on their own terms.

He’s had his work exhibited from Seaside, Florida to New York City and upstate New York. The pieces in this exhibition cover the range of his career from early to recent, from whimsical works to torsos, some for sale and others for viewing. He estimates there will be nearly fifty examples of his work and prices range up to $400.

The exhibition at Knoxville Soap Candles and Gifts begins at 4:00 PM on Friday with a reception until 8:00 PM. John will be there and he’ll be joined by Downtown Wine and Spirits who have kept some of his work for sale since the early days. They’ll bring champagne, Kelly Jolle and Will Boyd will provide jazz, Kilwins will provide chocolate and Rosa’s Catering will deliver goodies. What more could you want.

The pieces that do not sell will remain as long as they last through the month of February, so if you don’t make it out on Friday night, come by in subsequent days. If nothing else, come by and meet this wonderful man who elevates our city by his presence.

If you’d like to hear John personally tell his story, you can listen to the podcast from yesterday’s KnoxCentric radio show on WUTK, 90.3 FM.