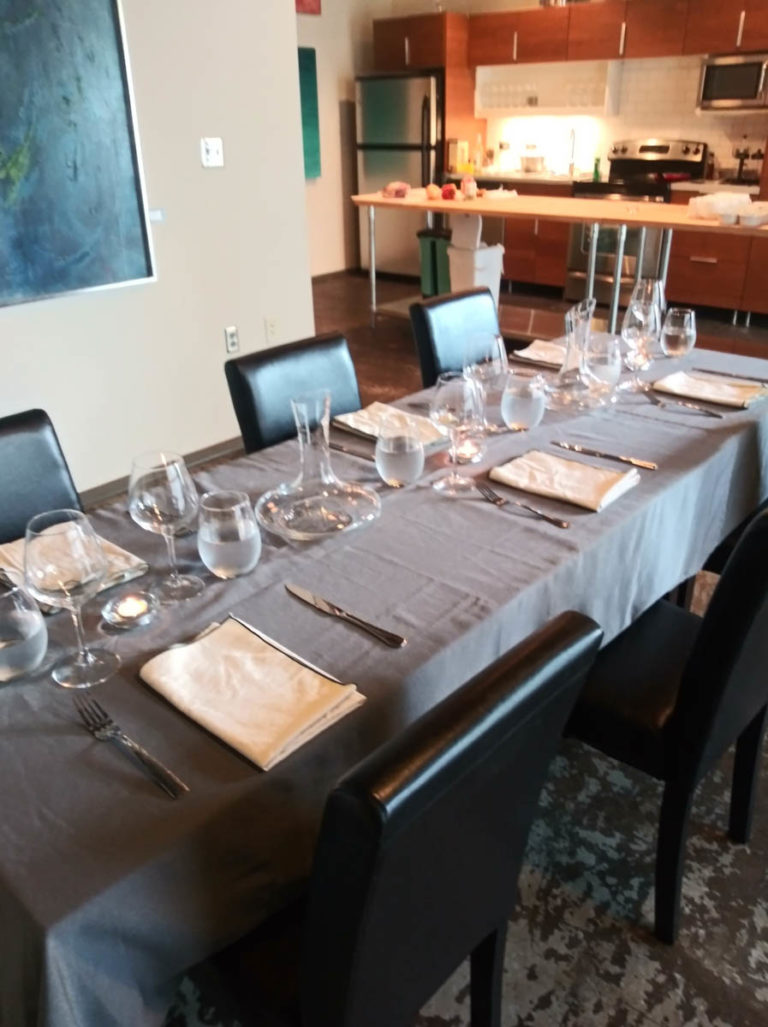 A new, tasty and fun treat is offered in the Old City at Soiree, a private dining space offering French Cooking Classes and Private Four Course Meals in the JFG Building in the Old City. The effort represents a return to downtown of longtime chef Cedric Coant whose late, lamented Le Parigo (at the current location of Kaizen) was probably before its time for our city.

Cedric is originally from outside Paris, where he lived until he was in his mid-teens. His family lived in Le Mans, home to the internationally famous race. They lived near the end of the longest straightway. He left school to become a professional squash player and traveled all around the world with the sport.

His family operated restaurants and bars and an uncle traveled to New York with the intention of opening a restaurant. He spoke no English and was robbed in New York City, but was taken under the wing of a man with ties to Oak Ridge, Tennessee. Because of that connection, his uncle opened a restaurant in Knoxville and Cedric visited periodically.

He met his future wife here and when the squash career had run its course, he returned, settling in around 2000. His English improved as he learned how to organize a kitchen, how to talk to people in a kitchen and how to be a leader there.

He’d grown up washing dishes and doing every imaginable task in the restaurants and also watching his mother cook. She didn’t so much teach him to cook as much as he simply observed. When he cooked for her years later at Le Parigo, she expressed her surprise that he could imitate what she’d prepared when he was a child.

By around 2005, he decided to open his own restaurant, and that became Le Parigo, which was originally located in Bearden across from Buddy’s Bar-b-q where you’ll find Echo wine bar today. It was recognized by Southern Living magazine as the top rated restaurant in Knoxville.

“I cooked French from the beginning. My artistic side came out. Sometimes I have a vision and I can see what would work. I don’t worry about what anyone else is doing. It works or it doesn’t work. People try to make things too busy. Change a few things, develop your taste and share it. Don’t try to make an orange an apple.”

He operated the restaurant in Bearden for a couple of years before moving downtown to the current location of Kaizen. The restaurant was successful for about five years, but the chef was struggling. “I was drowning. Working eighty hours a week and I had two daughters.” He tried a shift in approach with the briefly lived “I Cafe,” but ultimately closed, divorced and moved back to France to regroup.

He moved around a bit while he regained his moorings. After several months in France working with a friend’s cousin, he returned to Knoxville briefly before taking a position as executive chef in a restaurant near the U.N. in New York City where he fed the highest dignitaries in the world.

Another brief time in Knoxville was followed by a three-month stint cooking in South Africa. “It was humbling. People didn’t have much, but came to work with a smile. He was there when Nelson Mandella died and experienced some of the tension of the period.

Since his most recent return to Knoxville, he’s consulted with various restaurants, but hasn’t been offered a position as executive chef. “I  feel I helped Knoxville develop its culinary culture. Now, I just want to be happy.”

The focus of his attentions now, and with the idea of making a sane life at the same time, is to offer cooking lessons along with a private, traditional French meal. Soiree is in a private residence at 205 West Jackson, which is part of the JFG building, located just to the right (facing it) of the main part of the building, with a direct entrance through an open courtyard. “Soiree is an evening of surprises.”

What the evening offers is food preparation from about 5:00 PM to 7:00 PM for up to ten people. Patrons may join in the prep (encouraged) to learn about the dishes being prepared and with an eye toward showing that French cooking can be accomplished with common ingredients and a normal home kitchen. Guests may also watch or simply arrive for the meal at about 7:00 PM.

The dinner offered is a classic four-course French meal offered Wednesday through Saturday each week: An appetizer, an entree, cheese and dessert. The same meal is prepared each night of each week and changed for the following week. This allows for simplicity and for quality as Chef Coant builds the meals around good food he can find locally. He was one of the first chefs locally to emphasize organic, which he uses.

While patrons do not have to participate in the  prep, Cedric encourages it for the pleasure making something can bring and to instill the confidence to do it at home. After the prep it’s time to open (if you haven’t already) the wine (bring your own) and enjoy the fruits of your labor.

He opened softly in October and is now ready to open more widely to the public. There is a ten-person nightly maximum, and you may make reservations for one person up to ten. Bring ten and dine with friends. Come alone or with a small group and you may make new friends if others reserve spots the same night.

Cost is $65 per person and the meals are by reservation only at 1-865-232-5419. You can follow Soiree on Instagram at downtownknox_soiree or email him at Cedknoxpalate@gmail.com. (I’ll be there Saturday night with a party of four. Want to join us?)