Inside of New York City: MOMA, Hamilton and More 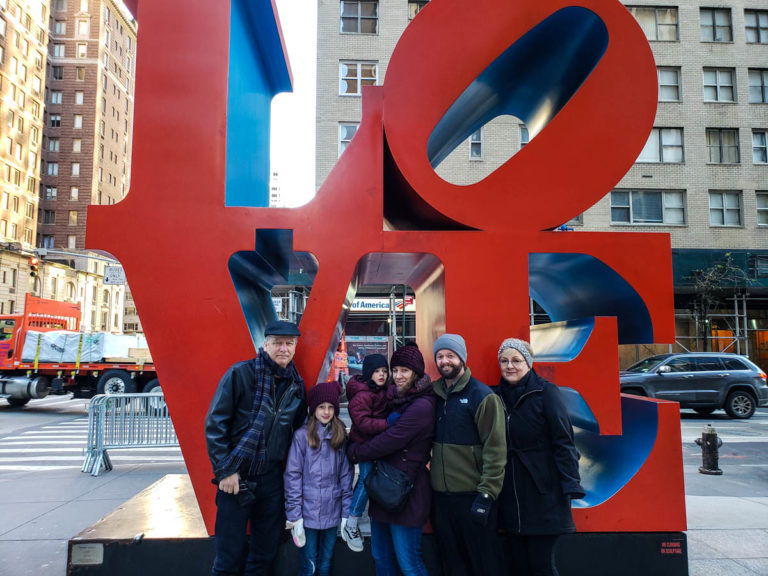 One of the few unscheduled activities on my list for any free time I might find was to visit the Museum of Modern Art, or MOMA. I’ve spent some time in the Metropolitan Museum of Art and still need some days there, but I’d heard for so long about MOMA and articles I read about exhibits there always seemed like the kind of challenging art that is fun to encounter.

Urban Brother and I took this one on together and spent about three hours. It’s short, but not nearly so inadequate as it would be at the Met or the Louvre. I’ve spent more time at each of those and felt like I didn’t really get a good start, missing entire wings of the buildings. This is different. It’s more manageable though, to be fair, it would be easy to spend three hours in one of the collections and dig in more deeply. Ours was more a quick overview.

The current featured exhibition is by artist Bruce Nauman and his work is everything I’d hoped for from MOMA. His art concentrates on negative spaces, on life at the edge, on perception and how it might be inverted. To explore these themes, his life work consists of paintings, some of which are disturbing, overwhelming sound and light installations and more. It truly is an immersive experience from start to finish.

Two of the works or installations really spoke to me. You see the lighted neon board in the photograph, but I only caught it at the moment they were all illuminated. The cycle involves random single messages lighting and going dark when another displays. A wide range of life elements and experience are included and provocatively juxtaposed. I was spellbound.

The other installation involved sound. The flat panels you see hanging at head level in the large room are all speakers and each plays the sound of a person reciting days of the week, though not necessarily in order. Timbres of voices fill the range from female and male adults to children and different accents. As you walk through, you hear multiple speakers which then shift to other multiple speakers. The work challenges the concept of the days of the week as an artificial construct.

I loved the Charles White works of African-American portraiture, while Urban Brother was fascinated with Bodys Isek Kingelez’ alternative city miniatures. I’ve got one pictured, but the exhibition filled an entire gallery with dozens of large creations constructed over decades.

Of course, we explored the permanent exhibits. I’m always startled to come face-to-face with a work I’ve known all my life through photographs. Confronting The Starry Night original by Vincent Van Gogh is one of those moments. I pictured it here with a phone in front of it intentionally. While I was able to work to get clear shots in New York City, much of what we saw included someone’s hand or stick holding a phone so they could record it. Not a fan. No doubt as a culture we are taking more photographs than ever in history, but I wonder how many will survive.

Also included, a name-check of the most famous modern artists. Numerous works by Picasso, Rousseau, Chagall, Matisse, Monet, Pollock and Warhol are found throughout the museum. It’s overwhelming me simply typing those names in one sentence. My absolute favorite experience in the museum was seeing teachers sit their students on the floor in front of these works and guide them through their experience of some of the worlds greatest art. I have to believe it will change their view of the world if not their lives.

We also saw Hamilton as a family and the adults loved it, while Urban Girl was marginal. She’ll probably love it more later as she realizes what she saw and heard. Interestingly, she identified two characters in the production from their voices. Daniel Breaker played the donkey in Shrek the Musical which she’d watched on Youtube. She nailed that he plays Aaron Burr in the current Broadway production of Hamilton. She also caught that James Monroe Iglehart who plays Lafayette in the current production played the Genie in Aladdin, the Musical, a role for which he won a Tony Award. All from their voices. My contribution to the conversation? “Cool!”

Everyone but Urban Brother walked up the west side of Central Park to see Strawberry Fields and the Dakota. Interesting how the generations play out. I was a little young for the Beatles, cutting my rock and roll teeth just about the time they broke up. I loved John and George’s solo work particularly. Urban Daughter, born thirteen years after they broke up fell for them in a major way (birthdays-memorized-level obsession) and got me to appreciate them even more.

Fast forward to Urban Boy, three-years-old: He’s as big a fan as anyone and not because of us. He watches Beat Bugs on Netflix and can sing along with a large portion of the Beatles catalog. So, to Strawberry Fields and the Dakota we went. The most moving moment was when a gentleman opened his guitar case and sang, “Imagine.” Given the context of our trip, it was quite an emotional note for me. That and the fact that “Imagine,” has to be one of the greatest songs ever written.

I’ll stop there, but there is more to come as we move into Thanksgiving and a local parade, plus Christmas.