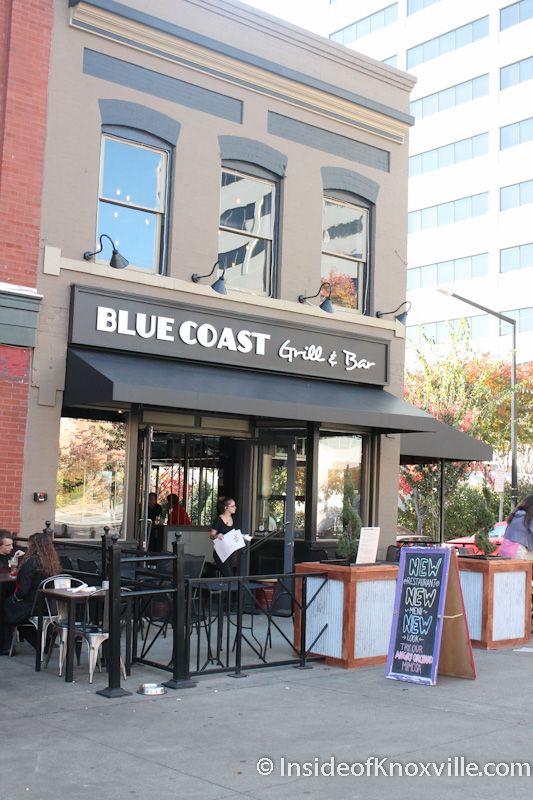 It’s something that seems to happen every year about this time: Sometime toward the end of the year at least one business will close. It’s often quite a surprise. In what is the first, if not the last of end-of-the-year business closures, Blue Coast Grill and Bar apparently closed its doors for the last time, yesterday. Employees, who seemed to be taken by surprise, spread the word last night.

The restaurant opened in March 2011. At the time, I noted that there were five Latin or Latin-fusion restaurants on that side of Market Square. Now there is only one: Soccer Taco. It’s the little taco place that just keeps going.

The restaurant seemed to struggle to find itself from the beginning, in my opinion. It opened as Blue Coast Burrito and the ordering process was confusing enough that a staff member was assigned simply to explain how to order. I never did quite get it.

The restaurant changed and adapted. “Burrito” was dropped in favor of “Grill and Bar,” and the menu expanded. The great deck was added outside and table service was instituted. An emphasis on local products was touted with herbs growing out front at one point and a list of local farms used as suppliers.

Still, it just never seemed to work, at least to myself and Urban Woman. We had a good meal there once, eating there simply because we were running late for an event and felt we could eat quickly. We returned because the meal was good, only to find the next meal wasn’t so good and the service was really slow. Maybe we were just unlucky.

As I wrote recently, even though it seems we’re having a significant number of closings, there are more openings by a significant margin. Still, there’s no denying that we’ve had some significant closures and, while it may or may not be related, we’re having rapidly escalating rents. The bar for profitability is getting higher.

If I learn any further details as the day progresses, I’ll add them here. Short of that, we’ll simply have to wait to see what evolves on that spot. It’s a great, reconstructed building (only the facade is original) with a lot of square footage, a full grease interceptor and a great patio on Market Square. I suspect someone will be able to do very well on that corner.