The Corner Lounge is Open! 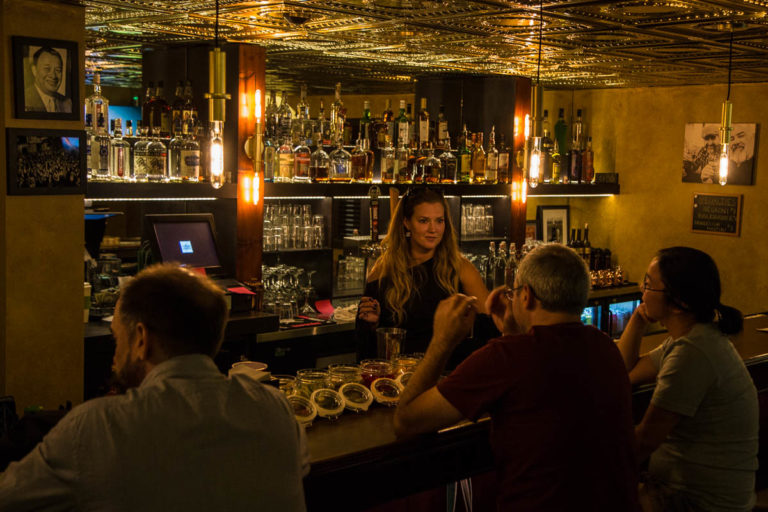 Steve Brandon and John Harbison announced plans last June to bring Knoxville’s iconic Corner Lounge back to 842 N. Broadway. The building sat empty and the roads and sidewalks out front were overrun with machinery and rubble as the city worked on the street. It was a bit hard to picture the vision they held in their imagination.

Well, it’s not hard to imagine, now. The street is finished and landscaping has been provided by Leah Gardner with all natural, indigenous plants. The interior space is attractive in every direction after having been designed by Colleen Riordan of Johnson Architecture, with construction by David Decker and Holston Construction.

The mural from the original incarnation of the corner lounge has been returned to the wall it once graced and it reflects the simple class the place is going for: a neighborhood bar where you might imagine Frank Sinatra and Dean Martin sipping cocktails at the bar.

And the bar area deserves mention of its own. The original bar has been restored and returned to its spot and it is beautiful. The tin tiles sparkle from the ceiling, reflecting the dangling lights below. The beautiful bottles add hues from behind and Mickey Ketron, Ian Roach and other all-star bartenders serve up the cocktails.

As you see, the promised stage has been constructed and the music has begun. Kyle, Leah and Peggy performed last Saturday night. Expect the music to cover a wide range, from Jazz to Opera and beyond, and some nights will be ticketed. Mic Harrison is scheduled for October 19, for example, and limited tickets are available at $10. You can get them at the bar (I already have mine!). The website is still coming along, with new content being added, so expect to see a schedule of performers there soon.

The menu has been refined a bit and, in addition to the photo here, you can see it here. You’ll find a selection of small plates and sandwiches, which feature fresh breads from Paysan and names that reference a bygone era. Also check out the dessert which starts with a Magpies cookie and toppings made in-house. Expect the menu to expand.

For the beverages, expect simple, yet elegant cocktails, many of which feature PostModern Spirits. A beer engine pumps the beer and eight beer taps are available for those not cocktail inclined. The cocktails are, however, the main attraction. The owners hope to provide a neighborhood feel with the camaraderie and bar culture that conjures.

They are open now, and initial hours will be 4:00 PM to Midnight Tuesday through Thursday, 4:00 PM to 1:00 AM Friday and Saturday and Noon to 7:00 PM on Sunday. Sunday also features a brunch starting when they open. Mondays are a day off. Follow them on Facebook and watch for updates to the website. But mostly, stop by, have a drink and a conversation. It’s what they’re all about.