Paysan Bread Brings Its Fresh-Baked Goodness to a New Home 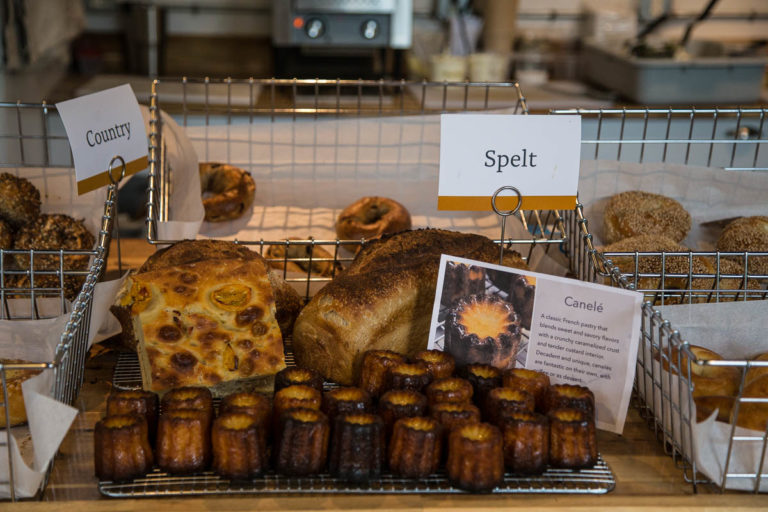 For many regular customers of the Market Square Farmers’ Market, Paysan Bread has become a staple of their Wednesday or Saturday shopping excursions. The buzz has generated long lines and sold out stock and made them routine. Now owner Blake Sallie, along with investors Matt Gallaher and David Rudder of Knox Mason and Emilia, has established a brick and mortar retail location for the bakery at 804 Tyson Street, the former location of Maker’s Donuts.

Blake is from Bristol, where he attended high school. Eight years ago he moved to Knoxville, thanks to then-girlfriend and now-wife, Mallory. He was attracted to the growing culinary scene and he says, “Knoxville felt like home.” He started work in the kitchen at Dancing Bear Lodge, but it burned and that job suddenly ended. He began work as a line cook at Knox Mason and the trajectory that would lead to Paysan Bread was set.

He’d started experimenting with baking at home and he was asked to bake for Knox Mason. He started with the charcuterie bread and then expanded to making the English muffins. He kept baking and people began noticing the quality of his breads.

By the time the Market Square Farmers’ Market opened for the 2017 season, he’d decided to give a go to selling his bread directly to the public. He’d located an unused oven owned by Chris Burger and hoped to cover his fees for the booth and make just a little more. He figured he could grow the business over time. He covered his costs in the first hour of the first day and realized there was a great market for good baked breads. His sales have doubled at this year’s market.

“Paysan” is French for peasant and it’s what he called his first bread at Knox Mason. He’d read an article by John Fleer, former executive chef at Blackberry Farm (and currently owner of Rhubarb in Asheville) which compared a region in France to our Appalachian region and the baker from France in the article called herself a “peasant baker.” He liked the idea of bread from common people.

He now produces a wide range of breads, recently adding fresh bagels to the lineup. He makes fresh baguettes twice each week and canelles, a French pastry, if you’re looking for something sweet. “I sometimes do other things just to change it up.” The reception since the early September soft opening has been very good. The business is also supported by sales to some of the best restaurants and culinary businesses around. You’ll find Paysan breads at Knox Mason, Emilia, the Tootsie Truck, Tako Taco, Cook to be Well and the Corner Lounge.

He said that when the space became available, he immediately went for it. Being next to a coffee shop was good synergy. “I wanted to be able to offer bread more than twice a week. I felt we needed a downtown neighborhood bakery. I think it works with Magpies and Wild Love Bakehouse. It’s a “baker’s alley.””

The first month has shown him that he needs more help and he is in the process of hiring to add to his five part-time employees. His initial vision of baking while filling orders and ringing them up wasn’t quite practical with the level of demand they experience. And he has plans to expand the menu. In addition to introducing bagels, he’s also introduced a blt on a bagel and plans to increase sandwich offerings.

He bakes the bread fresh every day, which means that they sometimes run out. Hours, therefore, are 7:00 AM Tuesday through Saturday until 6:00 PM or when the bread runs out. “It’s better retail than we expected. We thought it would be more of a production place, but we’re happy it has been so good and hope to keep growing it organically.”