What Are The Challenges To Adopting Light Rail Transit? 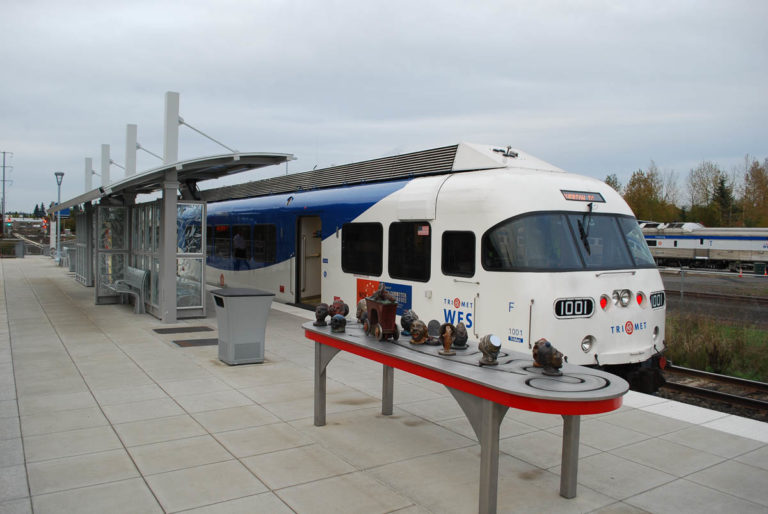 Colorado Railcar DMU, which Tri-Met (Portland) purchased for a dual use line from Wilsonville to Beaverton, OR. (Photo by Joe Hultquist)

(Ed. Note. This is the second in a planned four-part series on light rail transit by Joe Hultquist. You’ll find the fist article here. For the second in the series, I asked Joe to examine obstacles to implementing a light rail line or lines.)

The question in the title of this article is a loaded one, because there are several major challenges. For starters, the biggest challenge for contemporary light rail systems is generally cost. It’s important to break costs down into discrete components (which this article won’t attempt to do in full), but the overall costs are instructive. For most of the light rail systems built in recent years, the cost is staggering. Recent projects in our part of the country include the Lynx Blue Line extension in Charlotte, which cost $118 million per mile, or $1.1 billion total. The first segment of the Lynx Blue Line, which opened in late 2008, had a price tag of $462.7 million, or almost $48 million per mile.

Another North Carolina system is the planned Durham County/Orange County light rail line. Construction hasn’t started on it, but the price tag on it is currently projected to be $2.5 billion, or about $141 million per mile for 17.7 miles. That’s up from a projected $1.4 billion as of 2012. Other systems are building or adding lines that are even more expensive.

Why is light rail so expensive? And how does it compare with highway construction as well as bus rapid transit (BRT)? Proponents seem to focus more on the benefits, but benefits have to be weighed against costs in the real world. Opponents focus on the high costs, understandably, but they seldom seem to make much effort to try to figure out how to identify the reasons for those costs, and they’re even less likely to roll up their sleeves and work on how to reduce costs. They generally say it’s just a bad idea, and try to point everyone in another direction altogether (maybe buses, but generally highways and single occupancy vehicles).

So, again, why the high cost for light rail transit? I believe the first place to point is the federal government. By going through the federal funding process, communities encounter an incredible number of high hurdles that have to be cleared. It’s probably harder the first time around, going through the Federal Transit Administration’s New Starts Program.

A series of studies are required, and steps taken, before final funding (Full Funding Grant Agreement, of FFGA). A community has to spend years and millions of dollars just getting to that point. That generally includes an Environmental Impact Statement (EIS) under NEPA. Once the project is funded, even though the feds pay no more than half the cost, they impose high labor costs (Davis Bacon Act) and less competitive equipment and component costs (Buy America). In and of themselves, these don’t necessarily seem all that bad, but they drive the cost up almost beyond comprehension. While federal involvement in highway projects is often estimated to add around forty percent, the federal impact on transit systems is generally believed to be much higher.

Major highway projects, such as urban interstate projects, can cost in the same range. TDOT’s Smart Fix project in downtown Knoxville came in at $190 million for about a mile and a half. That included a lot of structure, which drives the cost way up. The same is true of light rail, and even bus rapid transit. Many recent light rail systems, including the new Charlotte extension and the planned Durham system, involve a lot of structures. At first glance, the Durham system appears to have more structure than is necessary. Both systems are deluxe, “gold plated” operations.

We know that a hundred years ago, there was a robust network of interurban rail systems that connected cities and smaller, suburban towns. It was a different time, and perhaps the cost of real estate, adjusted for inflation, was significantly less. But they managed to build systems that served large cities and their suburbs, and even smaller cities and some of the small towns around them. Real estate for the right of way is only part of the cost. Are there lessons we can learn by going back to what was done historically? How were much smaller communities able to build and operate these systems economically in their day?

When it comes to current costs, a basic single track freight line can cost as little as $150 per foot, or $792,000 per mile. That’s not including heavy grading, but it’s a quoted price by a local railroad contractor. There are other infrastructure costs, including signaling and train control, crossing control, passing sidings (for single track systems) and stations. And, there will always have to be some structures, even if they’re only for crossing creeks and major highways.

If the line is going to be electrified for powering the vehicles, as is the norm with light rail, that cost usually runs around a million dollars a mile or more. Some of that cost can be avoided by initiating commuter rail, such as the Music City Star in Nashville, which has passenger cars pulled by diesel locomotives. An alternative, similar to light rail, is diesel multiple units (DMUs), such as the ones used in Austin and Denton County, Texas. New light rail vehicles can cost as much as $5 million each, and DMUs are even more expensive. New commuter rail trains are also very expensive, but Nashville got around that cost by acquiring used equipment.

The only reasonable way around that, generally speaking, is what’s called temporal separation. That generally means running the transit or passenger service during the day, and the freight at night. That can work for low volume branch freight lines, but freight rail main lines have too much traffic to make temporal separation a viable option. There are several examples where the FRA has granted waivers for temporally separated light rail transit on branch freight lines, including San Diego, Salt Lake City, St. Louis, Austin and the River Line in New Jersey.

If new right of way has to be acquired, it must be purchased at a cost. And, if it’s not a willing buyer/willing seller transaction, acquiring some of the right of way could involve eminent domain. That’s the way all infrastructure projects are built, including highways and utilities. It doesn’t make it any more pleasant or popular, though.

Under Tennessee law, a regional transportation authority (RTA) can be created to include multiple cities and counties. RTAs are really regional transit authorities, and they have some governmental powers, but not imminent domain. So, to exercise that power, an RTA has to work in partnership with local governments. Even though local governments routinely use that power to acquire land for their projects, they will probably be more careful in using it to support a regional project. That in itself can be a hurdle, especially when acquiring right of way for a new line. The same would hold true for bus rapid transit.

How any system will be paid for, no matter how costly or economical, is probably the biggest elephant in the room. Under the Improve Act, which was passed by the Tennessee General Assembly last year, local governments can put before the voters add-on taxes to support transit. Any local tax other than property tax can be included in such a ballot measure.  So far, the only attempt to use that part of the law to raise funding for transit was the vote in Nashville this past Spring. The project was massive, it was very expensive, and it failed at the polls by a two to one margin. Voters will not vote to tax themselves unless they see a clear benefit, one that they believe is equal to the additional sacrifice they’re being asked to make (hard-earned dollars out of their pockets).

I personally don’t think it’s either realistic or right to propose to burden the taxpayers of our region  like these high cost systems and related tax structures are expected to in Nashville, Charlotte or Durham. We have to take a different approach, if possible. Is there a different way? I believe there is.

First, of course, is keeping the cost down. Even when the federal government is involved in funding, they only pay half, with the balance falling on state and local governments. Given how much the feds drive the cost up, that could actually mean a net loss or additional cost to the state and locals. And the Knoxville metro isn’t big enough to qualify for federal rail transit funding anyway. The Music City Star had a total start-up cost of less than $50 million. While their service leaves something to be desired (three trains in in the morning and three out in the evening), they’ve kept their costs low (they also use an existing freight rail line).

Some transit systems, and specific lines, generate more revenue from fares than others. Farebox revenue, as it’s called, often covers less than half of the cost of operations and maintenance (O&M), and therefore generally none of the up-front (capital) cost. Some systems only recover 25%. Capital costs are the first hurdle to get over, but O&M will always be there, year after year. If the majority of capital and O&M can’t be paid by tax dollars, where will it come from?

The idea with value capture is to have legal mechanisms in place to capture enough value out of a series of developments at different stations to pay for most, if not all, of the system capital cost as well as O&M costs. It’s actually an old idea. The railroads, especially in the west, were built in part with money generated from the creation of towns along the lines and the sale of the land to create those towns. Many of the original streetcar systems were built essentially the same way, usually by developers. There are several examples where value capture has played a major role in funding a rail transit line, including the Portland Streetcar and the Purple Line in Maryland. Also, the Brightline passenger rail operation in Florida is funded using a value capture approach (and no government dollars).

Beyond the issues I’ve already listed, there’s one that, in the final analysis, just might supersede everything else. If we don’t have the visionary leadership it takes to move an important idea or initiative forward, it won’t happen. By leadership, I don’t mean just political leadership, though that’s an essential component. Leadership that brings about healthy change comes from every direction; top down, bottom up and inside out. It’s elected officials and business leaders, but it’s also passionate, committed “average citizens” (however you define that) who are willing to do their part to make it happen. I’ll cover the leadership question more in the rest of this series.