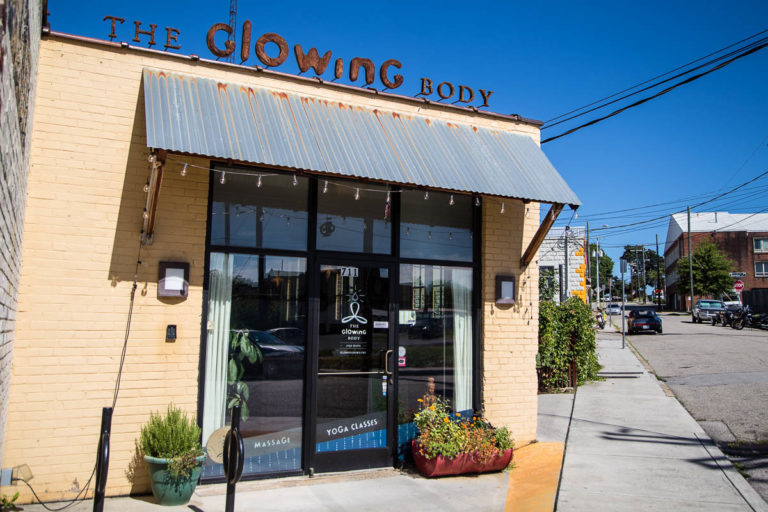 People and facets of the story of Glowing Body Yoga and Healing Arts intertwine and weave throughout a decade of serving north Knoxville. The business has shifted a bit over the years, grown and changed owners, but it remains dedicated to the well being of everyone served. Founded by Hollis Church, the business is now owned by Kelly Scott and Kimberly Lomonaco. I sat down with the two of them to talk about what led them and the business to they are today.

Kelly, originally from Greenville, South Carolina, first moved here twenty-five years ago. She became involved in the art scene, mounting an exhibition at a local gallery, while working with oil, sketching and charcoal. She also did jazz and modern dance. Her sister nudged her in the direction of yoga and she used Thai Yoga Massage to help with a shoulder problem and, “a seed was planted.”

Later when life threw her a few curves and she had to make decisions quickly about her future, she says, “It became clear to me to go to massage. I also knew I needed to move away.” She took her twelve-year-old daughter to Costa Rica and learned massage. She felt at home with Thai practice. After graduation, she returned home, but was determined to travel to Thailand to learn more about the practice, which she has done many times, now, and returns every year.

Kimberly had been her yoga teacher at Glowing Body before she left and the two maintained contact. She tried a table practice for a while, but began pushing Thai and people began loving it. Then she heard Tammy Kaousias, who’d bought Glowing Body from Hollis and owned it for several years, wanted to sell. Kimberly was considering purchasing it and Kelly cheered the possibility.

A week after learning of the possible sale, she woke up one morning, and texted Kim, “I don’t know if you would consider a partnership, but . . .” and it all began to come together.

Hollis had opened the business and put her creative spin to it. Tammy had solidified the business, putting systems in place, implementing teacher training and making it a viable business. It was time for a new era. Kelly says, “The change from the working side to working with the larger community has been a great experience and a platform to keep growing . . . we envision it as a community center for healing and focus.”

Kimberly moved to Knoxville in 2008 to pursue an MS in Speech Language Pathology. She already practiced yoga and her teacher in Boone (she attended Appalachian State) mentioned the studio was to open, soon, in Knoxville. She couldn’t find it at first, but found it in time to attend the Grand Opening.

She introduced herself to Hollis and said, “I want to work here.” Hollis surprised her when she said, “OK.” She sent in a resume the next day and by the day following that, was working behind the desk. She later proposed what she thinks may have been the first “donation,” class (pay what you want) at a full yoga studio in Knoxville. It was green-lighted and became a smashing success. The studio continues to offer Karma Classes in the same vein.

She prioritized her time in the studio and became invested. She became manager during the changeover and, for a time, was the only employee. Throughout, she has continued practicing speech and language skills, currently working for UT Medical Center as an SLP. She says the two overlap, as she uses her communication skills and her strategies of identifying areas for improvement and breaking down the steps to get to the desired goal or outcome. Still, she says, it’s been a steep learning curve to be the owner.

Kelly says, “I feel like every day is a yoga practice. Not every day is perfect.” Kimberly added, “It has heightened our sense of wanting to live out our values and ideals. The heart of why we are doing this has spiritual significance.” She also points to another side: “The constant problem solving can be exhilarating.”

The business currently has about forty teachers and employees and is open seven days a week offering multi-style yoga and massage. Yoga has been more emphasized from the beginning and that continues to be true, though massage is gaining more of a share of what is offered. Kimberly will soon begin offering both as she completes her massage studies.

The emphasis throughout is on, “the therapeutic relationship.” They are looking for people who want to make massage and/or yoga a part of their ongoing life, not just an occasional treat (though they welcome that, as well). Walk-ins are welcome, but you’ll find reservations for massage online, where you may also select your therapist, if you have a preference. The website offers a good introduction to the offerings and the Facebook Page is a good place to see what’s happening.

They also offer annual classes for potential yoga instructors and a new session begins soon. Early bird pricing is available until the end of this month.