An Interview with a Knoxville Treasure: Dr. Bill Snyder 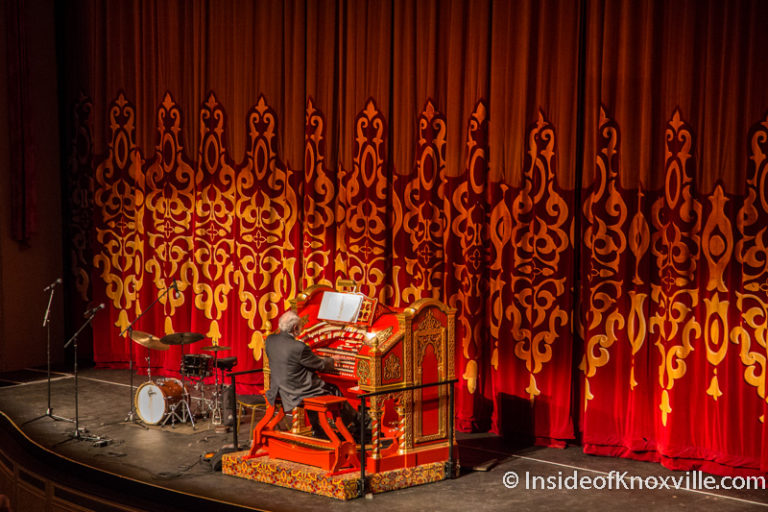 October 1 is a bit of a momentous day. The Tennessee Theatre celebrates the precise 90th anniversary of their opening day, October 1, 1928. It culminates their 90 years in 90 days celebration and it also marks the end of an important era in the history of the theater. Dr. Bill Snyder officially retires that day as the official organist for the theater, a position he has held since 1979, or almost half the history of the theater.

Like so many people, my first introduction to him was when he offered a tour to our family. I can’t remember, for sure, the decade. Maybe the 1990s? Family was in from out-of-town and I wanted them to see our theatre. It’s something he took pride in doing for many years. His first love, however, was sharing his love of the Mighty Wurlitzer organ. I recently sat down with him to look back on all the years and what stood out to him the most.

He was born and grew up in Knoxville, with the exception of three years (2nd through 4th grade) when his father, who worked for the U.S. Forest Service, was transferred to Chattanooga. Back in Knoxville, he graduated high school here and received his undergraduate degree from U.T. in 1954. He completed his Ph.D. in Engineering at Northwestern in 1958 and took his first teaching job at N.C. State, where he taught for three years before spending three years at Stony Brook.

He returned to his home state in 1964 to teach at the U.T. Space Institute in Tullahoma, where he remained for six years before finally returning to the University of Tennessee where he would complete his career. He became a professor in the engineering department and eventually served six years as its dean and six years as U.T. Chancellor, retiring in 1999.

He began serving as the organist at the Tennessee Theatre in October of 1979, but he’d been involved in music long before that. “I started piano lessons in the third grade. I’ve always loved music. I loved the piano.” He took lessons for six years. With that limited background in music, his interest was piqued when he, “saw an article in the paper that there was a group opening the theater, again. I came down and asked if they were going to use the organ. They said they didn’t have an organist and couldn’t pay one. I told them I would play for fun and for a public service.” He never did get paid.

He met the most renowned organist to precede him, Billy Barnes who performed four times daily in the 1930s and 1940s, and brought him back to do a concert. It was special to him because he’d listened to Billy Barnes playing the organ on a weekly radio show when Dr. Snyder was a child. “I listened to that when I was a kid and that kind of stimulated my interest.”

Other organists also played over the years at Bill’s invitation. Some of the best, like Lyn Larsen and Jelani Eddington played the organ. “Without exception they all bragged about the organ and how it has been cared for.” He also had Lee Irwin, who’d built a career playing for silent movies, take a turn. They’ve brought that back a bit in recent years.

The first time I played the organ, October 1, 1979, I played for a movie. It was the old Clark Gable and Jeanette MacDonald move about San Francisco (Ed note: “San Francisco,” 1936). When I pushed the button for the organ to rise, I thought, ‘What the hell did I get myself into?’ Afterward a lady came up and said her husband had proposed to her in 1936 when they were there watching that movie.

I have some memories that are not too good. One night I pushed the button to come up and nothing happened. I played fifteen minutes in the pit. You can’t hear the organ. Another night, there was a young group of high school singers performing. I had the organ about halfway up when one of the female singers fell in.

He reflected on other memories he’ll take with him, like all the people who come up and tell him their stories and history with the theatre. He’s enjoyed seeing all the former military members stand proudly when he plays their branch song on the fourth of July. Beth Haynes had her wedding there and he played. He noted wryly, he never had a funeral there, though he’s offered.

He says in the years when he both taught or worked at the University and played the organ, he worked around his UT schedule, playing mostly weekends. He had students show up and recognize him and he said they were quite surprised. “It was fun to let engineering students know that you could have another side of your life that wasn’t technical.”

Bill waxes eloquent when talking about the organ.

The tones on the organ are different. Mechanically, there is no difference. There are 61 notes on the keyboard. The pipes in a theatre organ attempt to imitate the sounds of an orchestra: clarinet, tuba, flute, strings. You can make a theatre organ sound like a church organ but not the other way around. There are thirty-two notes in the pedals. It’s been a great experience. It’s a great organ, made by Wurlitzer, installed and played on opening day, October 1, 1928.

The new organist will be Freddie Brabson whose father brought him to the theatre when he was “nine or ten years old.” He brought him to a Saturday matinee and introduced him to Bill. “He would hang over and look at the organ rising. He moved to California, then moved back and heard the organ had been rebuilt. He asked if he could play. He was damn good! I said, “Freddie, on behalf of the authority vested in my by nobody, would you be the associate organist?”

Freddie accepted that honorary position and assisted for years before eventually taking over most of the duties. He is organist and choir master at the Episcopal Church of the Good Samaritan. He will officially become the house organist at the Mighty Musical Monday event on October 1.

While Dr. Snyder says he will miss it, he’s lost some mobility in his left hand and it makes playing much more difficult. He says, “I may play one song at the celebration. I want to play “Thanks for the Memories,” Bob Hope’s theme song. I may be emotional, but I’ll enjoy it and think about the great times. My hope is that the Tennessee Theatre will continue to thrive for many years to come.”