Alias Grace Offers a Chilling Glimpse Into Our Darker Psyche 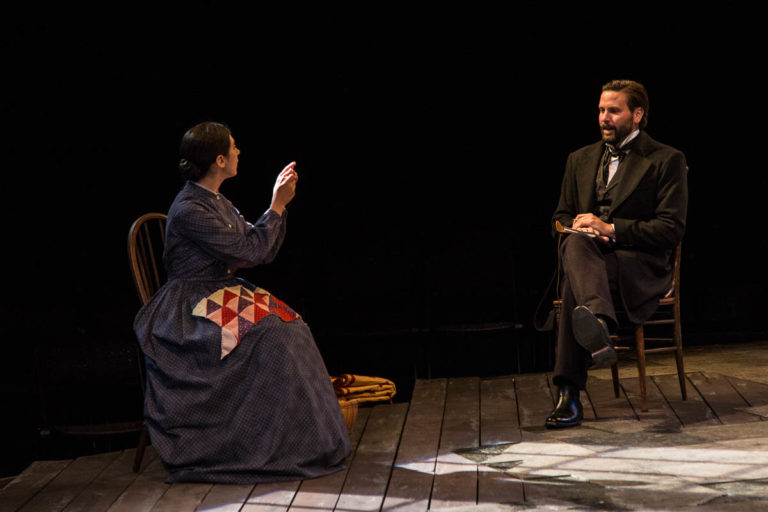 The play, an adaptation of the award winning novel of historical fiction by Margaret Atwood, was first produced at Ball State University. Adapted by Jennifer Blackmer, the Clarence Brown production is directed by Karen Kessler who also directed a production in Chicago. Brenda Orellana, a UT MFA student assumes the lead role of Grace Marks. It marks Ms. Orellana’s third major role at Clarence Brown and her portrayal of the mentally ill murderess is chilling enough that I might find myself a bit nervous should I encounter her on the street. She inhabits the role.

The historical story behind the book and play involves a double murder in western Canada in 1843. A Scottish Farmer (Thomas Kinnear, played by Collin Andrews) and his mistress/housekeeper (Nancy Montgomery, played by Emily Helton) were murdered and two servants, including Grace Marks were convicted of their murders. The male servant (James McDermott, played by Brady Moldrup) was hanged and Grace Marks was sentenced to life in prison. She was eventually pardoned and released.

In the novel and in the play, a group including Rachel Level (Katie Norwood Alley) hires a psychiatrist, Simon Jordan (Brian Gligor) to ferret out Grace’ story. She claims to have no memory of the murders and the group feels she is innocent and would like to see her pardoned. As the relationship between the doctor and Grace progress, more emerges about the murders and the relationships at play that led to the crime.

Murder, mental illness and deception, intentional or not thread through the story. It’s difficult not to ponder the treatment of women in society, given current conversations. In some regards, the story line and current headlines dovetail with issues of honesty and abuse being prevalent.

The set, as is generally the case in the smaller theatre, is very simple. The structure of the plays presented there calls for more audience imagination. Quilts are used as both a backdrop and as props and those were provided by Gail Moehlman. Otherwise, a few chairs, a table and a bench evoke enough to allow the actors to carry the storyline successfully.

The production began last night and continues through October 14. Performances are presented Wednesday through Saturday at 7:30 PM each night and a 2:00 PM matinee is presented each Sunday during the run. Tickets range from $12 to $18 and may be purchased here.