Cruising Through a Different First Friday 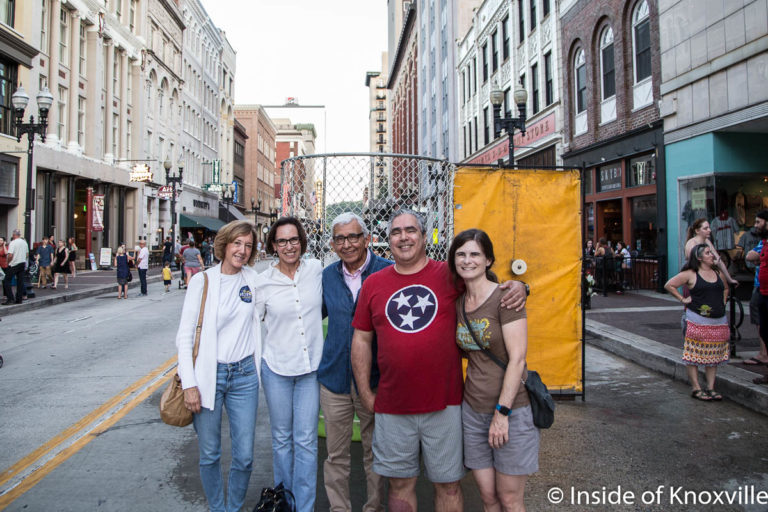 It might surprise some of you to learn that I don’t always go out on First Friday. I’m usually wanting to relax at home, spend some time outside with the neighbors or attend a particular event. In a way, it’s a luxury of living downtown – I can drop by the galleries anytime I want and check out the exhibitions which are usually up for a month.

This past Friday, we did go out and enjoy First Friday and it was instructive as to how much the event has grown. We went pretty hard from around 5:30 and missed a number of spots we targeted because 9:00 PM came before we could finish. I hate we missed some of it, but I have to say we loved what we did and the city sparkled on a relatively mild August night.

Urban Woman, Urban Brother and I started in the car. Odd choice, right? I wanted to see some of the outlying events and show them some spots they’d not seen before and that required a car. First stop, Felding Co, which Urban Woman had not seen. They had hot dogs outside (we passed) and a pop-up show inside featuring the debut of the In With The Old pop up shop experience (Floral Design by Meg Hutchinson.

The shop is really looking good and had a good crowd, which was one thing that struck us all night: the crowds were big and not simply concentrated in one spot. We left there and walked across the street to the Broadway Studio and Gallery where an opening reception was underway for artists Deborah Kowalczyk and Wanda Arnold. The spot has some really great work and it’s one I’ve overlooked. None of us had ever been inside.

Next we road out Central to a little open house at Central Cinema. I wrote about it last week, of course, but my Urban Family had not checked it out. I think I’m most stoked about the cereal and cartoons on Saturday mornings – for the little Urbans, of course.

It was back to Broadway and into Emory Place for the annual, month long Collaborative Narrative residency between Donna Moore and Emily Bivens with special guest exhibitor Lynne Ghenov. In addition to some interesting art on the wall, the exhibition featured motion photography on two screens and a man playing an upright piano inside a room constructed of wood and clothing patterns. Of course, he had a claw foot tub with vegetation inside and cool lighting over the entire installation. I actually thought it was the coolest thing I saw all night.

From there we traveled to the final car stop at Smart and Becker to check in on my friend Ryan-Ashley and her featured artist exhibition, Finding Joy, a collection of abstract embroidery work by artist Shea Goitia. It was another new stop for the other Urbans and Urban Woman snagged a piece of jewelry by Ryan-Ashley – earrings with changeable backs. Happy anniversary! We also checked out the photographs by Sophia Abouleata at the next door Gallery 1010 – which is where it moved from the 100 block. I loved the photographs built around the theme, “A Common Place.

Urban Brother cut out and Urban Woman and I ditched the car and started around uptown, stopping off first at the Art Market and Gallery with featured artists Eun-Sook Kim (Painting) and Jennifer Lindsay (jewelry). I was happy to see Greg Horne and Paige Travis at the special retrospective of his mother, Marjorie Horne’s work.

One of the big things that had people buzzing over the weekend was the delight at having Gay Street partially closed. Art Carmichael had a dunking booth in the street, though I missed the dunking as he had a small injury by the time I arrived. Talk has begun circulating among downtown residents regarding the possibility of closing Gay Street for every First Friday. Or what about Sundays when there is little traffic on the street? I’ve heard one complaint during the closure and it was from my Uber driver, complaining that they can’t easily get to Market Square to pick up customers.

We stopped in at the UT Downtown Gallery which is showing works by former undergraduate and graduate students from the Ewing Gallery permanent collection. We stopped in at the Emporium, next door, as the very early witching hour of 9:00 PM was approaching. We particularly enjoyed the paintings by Sergio Martinez Avila and Ivan Soto Hernandez and the Raku pottery of Rex Redd. Also featured this month is “Specimens of Steam: Artifacts and Images of Another Reality, and Sculptures from Nature by Marty McConnaughey.

As we entered the Old City, it became clear we had run out of time. Large crowds were still milling about in every direction and it seems a shame so many businesses close so early. Urban Girl, upon learning that New York City is the “city that never sleeps,” declared that Knoxville is the city that goes to bed at 7:00 PM. Surely we could all stay awake until 10:00 PM on First Friday, no?

I loved seeing the crowds on the boardwalk outside the Jackson Terminal building and we’d hoped to see what was new in Rala and to say hello to Matthew Cummings at his First Friday glass exhibition, but we watched as signs were pulled in and lights were turned out.

Hungry and tired, but happy, we decided to have a light dinner at the Old City Wine Bar to end the night. It ended up with a pretty large charcuterie and cheese plate, a cocktail of Urban Woman’s choice and a nice Italian red wine suggested by sommelier Matt Burke. We also enjoyed a stunningly good panisse and agreed we cannot wait until chef Paul gets a full kitchen and lets loose at Rebel Kitchen, next door.

We were so glad we actually got out and did the full First Friday experience. The night was pleasant, the crowds were large (even at 10:30 as we walked home – you go, Knoxville!). Even the walk home offered a little delight as we saw the staircase to the Old City lighted up in all its new glory. We agreed it felt like we were on vacation and having a great evening filled with fun, adventure and surprises – all wrapped up inside the city we love and so many good people at every turn.