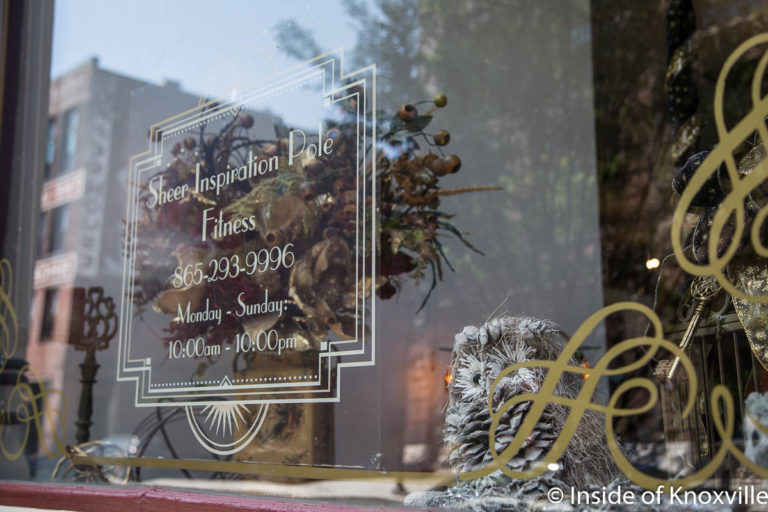 When my friend Eva (Ginger by Choice) recently told me her pole dancing class had moved to the Old City, I was surprised. When she said it had been downtown on Main Street for years prior to that, I was even more surprised. I’m not sure the last time there were active poles downtown, but it’s likely been a while. Now it seemed, they were back, though with a fitness bent.

Natasha Fine is the owner and primary instructor of Sheer Inspiration Pole Fitness and she agreed to meet for an interview and have me shoot a class. The studio, at 121 West Jackson Avenue, is located in an otherwise residential building and Natasha said the owners felt the business would have a lower impact on their residents than a bar or restaurant.

Natasha is from Riceville in McMinn County, near Athens, where she graduated from school, got married, had children and divorced. She dabbled with college, worked retail and floral jobs and when she couldn’t find another job, she got a job at as a door girl at a club. She has a gymnastics background and was, “fascinated with gymnastics on a vertical bar.

She watched for a long time and began training herself. She started dancing and developing tricks while learning from the other girls. “It made sense to me. I could break down their moves.” She danced for, “seven or eight years, some in Atlanta and some here. Then she says the job changed. “It went from entertainment to expectation. The money went down.”

Clubs started closing. In 2007, she walked away only to realize, “after a few weeks I felt my body shifting. I tried working out.” She says nothing replaced the fitness she’d obtained by pole dancing, so she got one for her apartment just to stay in shape. A friend wanted to learn and Natasha began researching how to teach pole dancing. She quickly found that pole fitness was a growing industry in places like Australia and California. She talked with Felix Cane (video below), the Australian Pole Champion.

Natasha made outlines detailing how she does what she does and developed a curriculum. She advertised lessons and using her single pole in her home began teaching pole dance for fitness to one or two students at a time. She began to take workshops to improve her teaching skills.

She bought a small home, but had so many classes in her home that the HOA began to complain about the cars. “Besides,” she said, “I wanted my house back.” She knew she had to make the next step.

In April 2013 she opened a studio in a building at the corner of Main and Central. As her business had grown, the concept had grown in acceptance and demand. Competitions began to spread across the world and the US. Mainstream television shows like Good Morning America began to spotlight the growing trend. Different styles of pole dancing emerged and the Olympic Committee began to study the sport.

She already had clients and they followed her to the new studio and the business continued to grow. Eventually they outgrew the space. They also really needed taller poles, but were limited by the nine-foot ceilings. The new studio features poles that are nearly fourteen feet tall. Competition poles are twelve feet.

She also has enough room for poles to allow students not to bump into each other and to offer the possibility of running more than one class at a a time. She likes the women being able to watch each other’s classes and get to know students at other levels. She’s added two additional instructors and another is shadowing to learn to teach.

Different women have interest in various styles of pole dance and so, a range of classes are offered. Any of the styles require a serious commitment to fitness as the strength required to perform advanced moves is significant. She says it works on more muscle groups than any other activity. Classes are offered in exotic pole dance, modern pole dance, dramatic and entertainment. There is also a “Low Flow,” and a Floor category.

“Nothing can singularly replicate what it does for your body – shoulders, core, pecs. All or movements and transitions are diverse. It keeps your body from plateauing. She also likens it to aerial yoga. Not all the classes include the pole, however, some focus on bands, blocks and yoga wheels. There’s a sensually seamless class which does not use the pole and a chair class.

“There will be four-to-seven days of soreness after the first class. Age, weight and fitness level does not matter. It offers immediate gratification.” She says it reduces, “self-consciousness and low self-worth. It will change your world.” She currently has over 150 active students.

All new students are required to master the beginner level, or Intro to Pole before moving to the more advanced and diverse classes. The classes utilize body weight muscle isolation, so additional weights are not necessary. Some classes are cardio based. The range of classes offered at the new location has begun to draw in women in the neighborhood who can walk to class.

Both she and the students love the new location. “Lots of people pop in to watch classes. It has been a blessing and a joy to have this response. One student asked if I was going to put up curtains. I said, ‘no,’ I want people to see and to have transparency.”

You can find Sheer Inspiration Pole Fitness on Facebook, their website or Instagram. On Facebook you’ll find a button to register for classes and registration is available on the webpage. On Instagram you’ll see some amazing video of students and of Natasha. Follow on each of the social media formats to get word of coming features like Jordan Kensley coming September 21 -23 and the September 7 First Friday showcase for beginners. There will also be a pole show October 25 called “Origins,” at the Concourse.