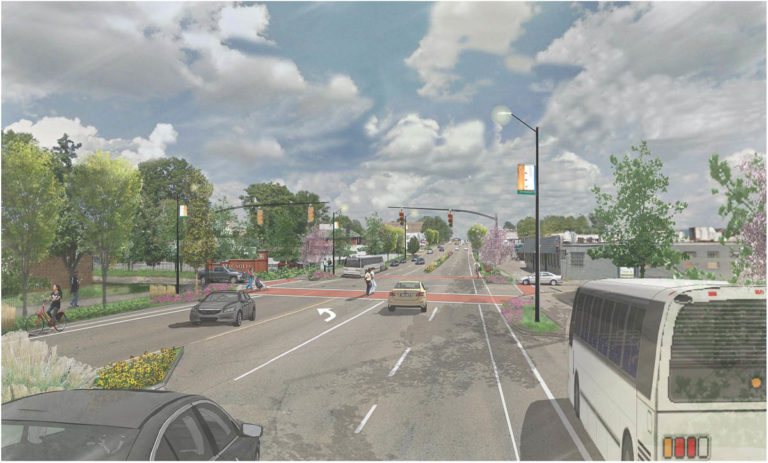 August 9 at 10:00 AM, ground will be broken marking the start of phase one of the Magnolia Avenue Streetscapes Project. Work is expected to begin immediately after and is anticipated to require close to a year for completion. Vaughn and Melton Consulting Engineers will complete this phase with Bryan Berry serving as Project Manager for the city. KUB has already completed some infrastructure improvements.

This phase includes the north side of Magnolia from Jessamine to Myrtle, a distance of four blocks. Phase two will cover the same distance on the south side of the street and the hope is to begin that portion of the project immediately following completion of phase one. Two lanes will remain open during as much of the project as possible. Phase two will be handled as a separate bidding process.

The project has generated controversy from several angles. Some in the community felt they were given inadequate opportunity for input, though public meetings were held. An announcement by the mayor just a few days ago regarding last night’s meeting to review plan drew over two hundred comments. Responses were very divided on the use of the money ($4.18 Million) for corridor improvements rather than crime reduction, concerns were expressed over gentrification and excitement was expressed the city is focusing on what some feel is a long neglected part of town.

The idea behind the project is to beautify the blocks and make them safer by adding lighting, wider sidewalks, more well-designated, stamped crosswalks like those currently being added to Gay Street, and adding small islands in parts of the road. Bike lanes will be widened and landscaping will be added, traffic lights and bus stops improved and designated on-street parking will be added. The Knoxville History Project plans to do the history wraps around traffic boxes like they’ve done in downtown Knoxville, with an eye toward the history of the Magnolia area.

A number of comments on the Facebook post included complaints that attention has not been given elsewhere. It’s hard to imagine the city opening another front on the major Streetscape project list. In recent years infrastructure downtown has been completely redone. The Cumberland Avenue Project consumed a large amount of time and city resources and work is underway on the Central Street corridor.

Sevier Avenue is set to have a significant amount of work and now Magnolia is added to the list. That’s a lot of major work on main thoroughfares in a relatively short time span. And that’s not to mention the work done on Jackson in the Old city and the pending replacements of both the Jackson Avenue and Broadway viaducts.

Speaking of the Cumberland Avenue Project, I was able to chat with Anne Wallace and learned some interesting cycling and pedestrian information from that project, which has also had its detractors. She said that they’ve looked at the seven years prior to the revamp and that the average pedestrian or cyclist injury due to being struck by an automobile was 3.6 times in each seven-month period (September through March).

In the seven months since the completion of the project, there have been zero pedestrians or cyclists hit by cars along Cumberland. She also pointed out there have been 44% fewer vehicular crashes, $25 million in city investment has led to $190 million in private investment and for the first time in 30 years, organizers felt comfortable having the homecoming UT parade on the street. The hope would be for similar results along this stretch of Magnolia.

There is a designated site for updates on the Magnolia Avenue Project and people wanting weekly text updates on the project can text, “Magnolia,” to 313131 to get included.