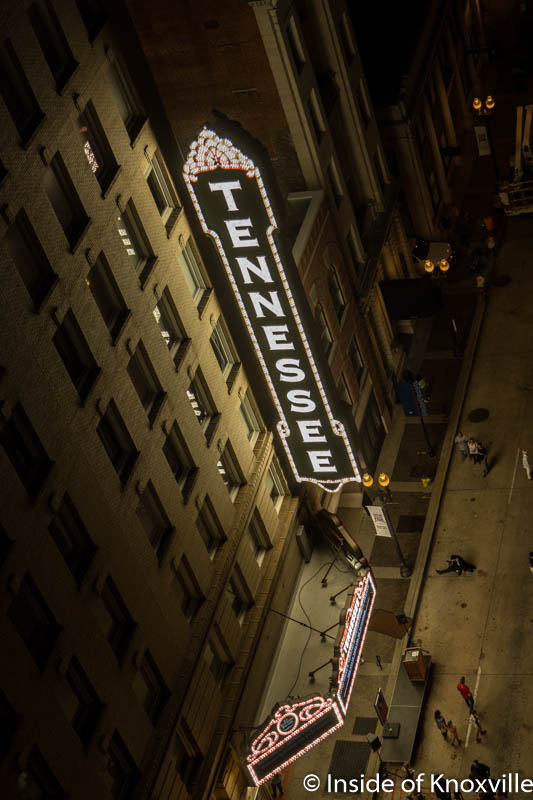 It’s unlikely there is a citizen alive in Knoxville who remembers a time without the Tennessee Theatre anchoring the 600 block of Gay Street. Its official birthday is October 1, 1928 and big plans are afoot to recognize the institution that is carried in the hearts of so many of our citizens. Executive Director Becky Hancock says she hopes the celebration will be embraced by all parts of the Knoxville community.

While the official birthday is a singled day – and still a couple of months away – tickets go on sale this week to some of the ticketed events and everyone is encouraged to get those tickets or to get the free events on their calendars. It all kicks off September 29 and will run for roughly 90 days to celebrate the ninety years. Special events will be included alongside, “giveaways, free tours and open houses.” You should also see fun facts and photos spread all around social media.

Tickets go on sale this Friday at 10AM for a kickoff party, prohibition-style, celebrating the roaring twenties which gave birth to the theatre. Expect a speakeasy atmosphere, a lot of dancing and themed cocktails. Cost for the event is set at $90 a ticket.

The next night, local and international favorite, Alison Krauss will take the stage for the 90th Anniversary Gala. Tickets for the concert – which also go on sale this Friday – are $65 and $85, but a VIP ticket is also available for $250 which entitles the holder to prime seating and a reception (which likely will include a special guest).

It’s important to note that events like these and donations in general are critical to the ongoing success of the theatre. While a number of events and concerts at the theatre sell out or are near capacity, much of the money generated from these events scheduled by AC Entertainment, goes to paying the artists and related expenses. Donations and special events like these provide an operating margin, allow for ongoing preservation and maintenance of the building and also make possible the many free events offered at the theatre.

Speaking of free events, the next day will include two free events. Mighty musical Monday is offered the first Monday of each month to anyone in the community and features performances on the Mighty Wurlitzer organ, as well as a variety of other entertainment. This particular day, of course, also coincides precisely with the 90th anniversary. Additionally, this will be the swan song for Dr. Bill Snyder who will yield the position he has held since 1979 as house organist.

That evening, the public is invited to enjoy a re-creation of what audiences might have experienced if coming to the movies in the theatre in 1928. A vintage cartoon, a newsreel and a comedy short will be followed by an organ performance and an era-appropriate film. It’s free, but patrons are welcome to bring 60 cents, the 1928 price of admission.

There will be many more announcements of special events to follow this three-day burst to get the celebration started. It’s all designed to promote the idea that this is our theatre, it’s something precious and we must protect it for subsequent generations. Since the 2004 $30,000,000 renovation, patrons have been able to experience the theatre as it was first presented, something that had not been possible for a generation or more as the facility had deteriorated. Alison Krauss was one of the first artists to play the newly reopened house in 2005.

In addition to the events already planned and announced (a full list is included at the link below), pop-up events will also be announced, which could be anything from free popcorn to ticket giveaways or even a giveaway of a backstage tour. They will be all over social media, posting with the hashtag #90daysfor90years. The public is encouraged to join in posting memories, pictures or thoughts about the ongoing celebration.

Not many theatres get to ninety-years-old. I feel the Tennessee Theatre is stable financially and set up to push for bigger and better things through our 100th anniversary. The stability allows us to take some risks, but we need support. We look for programming to open the doors even wider. We want everyone to know this is their theatre. We want to give back and to celebrate with the community.

Though it hasn’t been previously announced, Hancock said there will also be special merchandise including a poster designed especially for the event by Justin Helton of Status Serigraph, as well as a limited edition 90th anniversary Christmas ornament. Donations of $90 are also being encouraged in honor of the 90 years of memories offered by the theatre.

They are also interested in hearing from you. Many of us have stories of special moments we’ve experienced at the theatre and those are being collected for preservation via TAMIS and the Knox County Public Library. You’ll find the link here to schedule an appointment to have your story recorded (think “Story Corps“). It’s also likely some of these stories will find their way into podcast form to be shared. You can make an appointment to share your stories here.

For ticketed events and performances, purchase tickets online at www.tennesseetheatre.com, call the box office at 865-684-1200 or visit the box office on Clinch Avenue during regular business hours.

Ed. Note: This is the last full week to get out and enjoy the Waldo hunt. Urban Girl and Urban Boy love it every year and this year Urban Woman even got into the fun. Kids of all ages are enjoying it, so get out and get involved. Starting point to get your passport is Union Avenue Books and the deadline is July 31. Buy something from one of the businesses while you’re at it – it helps keep them around!