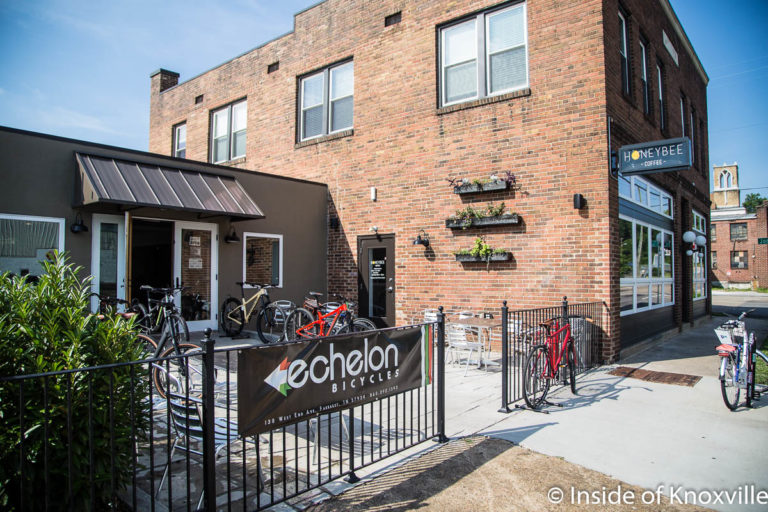 This one slipped by me. I didn’t notice that Echelon Bicycles had opened a second location at 704 Sevier Avenue until the recent south Knoxville Open Streets event. It underscores the power of an event that gets people out of their cars and allows participants to tune in to what they’ve been passing by.

It’s also a business that makes perfect sense for its location, given that the stretch of Sevier where they’ve landed is the pathway to the Urban Wilderness and attracts cyclists from downtown headed in that direction, as well as cyclists who’ve traveled to enjoy the trails available close by. It’s the second location of the store and a logical progression.

Owned by Kelly and Tanya Hamm, the couple arrived at bike shop ownership in a circuitous route, but one that makes perfect sense in retrospect. It really seems a wonder they didn’t have a downtown bike shop much earlier, but life offered a few twists and turns along the way.

Kelly’s father was in the military and was based at Millington Naval Base outside Memphis when Kelly finished high school. He attended State Technical Institute and met Tanya. He was a manager at a home interior store when he was offered a job in New York City and the couple took the chance to live in the city. They only lived there a year, but enjoyed living in the upper west side and Brooklyn when it was beginning to come back.

They left New York City in early 2001 and decided to move to Knoxville. Kelly’s dad had moved here and the couple had visited. Kelly had also raced here. While they made the move intending for it to be temporary, Kelly said, “It didn’t take long to realize we wanted to stay.” They loved the pace and size of Knoxville and moved into an apartment in the Old City where they lived – with very few neighbors – for five years.

For us it seemed logical: outdoors, national and state parks nearby, mountains, lakes. We could easily drive to the beach or larger cities.For us the quality of life is fantastic.

In the early days, he worked for Sprint and she got a job with U.S. Cellular, where she continues to work. After a year, he realized he was finished working for corporations and began working in a bike shop while he figured out his next move. It was a natural fit. He’d bought his first bike in 1988 and worked in a shop in the 1990s.

Of cycling and working with bikes, he said, “It becomes a lifestyle, something you want to continue to do.” He realized the riding available in the area was ideal and that cycling was growing. He enjoyed helping people enjoy the sport. Even though he sensed it growing he says he still marvels at how much it has exploded. Whether it is road or mountain biking, he feels Knoxville has it all. “The zen of road bike riding is the mountains.”

The couple had considered opening a bike shop before, but when the economy tanked, they decided to defer the idea. Eventually, they opened their first location at 138 West End Avenue in deep west Knox County in 2013, but downtown continued to be on their radar. At 5800 square feet, the space was so large that Spero Coffee – eventually to become Honeybee – considered subleasing some of it for roasting coffee.

Interestingly, they discussed the possibility with the owners of Honeybee to open a combination bike shop and coffee shop, a concept they’d seen in another city. When Honeybee opened their south Knoxville location, they had an extra space beside the coffee shop and Kelly and Tanya decided to sublease it from them and open the, “south Knox trail shop,” with the selection tailored to local demand.

As the closest bike shop to the trails, they focus mainly on mountain bikes both for sale and for rent. They also have commuter bikes and accessories and offer quick fixes for people needing that sort of thing – like a reporter whose kickstand came loose when he interviewed them. The other store serves as a back-up for a much wider range of bikes and riding gear. The original location also offers Crafty Bastard beer, so you can get a taste of downtown’s craft beer culture out west. It was the first retail store to get a beer permit in Farragut.

Jeb Brown operates the Sevier Avenue location. He also lives just across from the planned primary entrance to the Urban Wilderness. “I ride every day. South Knoxville has so many great places to ride.” When he arrived Knoxville nearly four years ago, he bought a $2,000 mountain bike and loved it so much that when the Baker Creek Grant was announced, he looked for a home in south Knoxville and moved to be close to the trails.

The store opened about a year ago and Jeb, who is from Ohio where he’d flipped a few houses, did most of the interior construction. One wall consists of barnwood from Kelly’s grandfather’s farm. Stop in and visit the shop beside Honeybee at 704 Sevier Avenue. They are open from 10:00 AM to 6:00 PM, Monday through Saturday.