A Business Re-locates, Plus a Couple of Updates 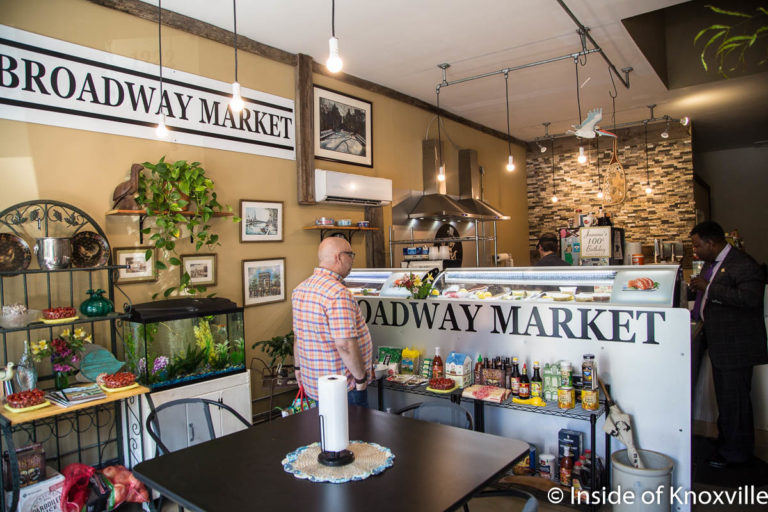 I dropped in on my friend Don DeVore who, with his wife, Lauren, owns Broadway Market. About a month ago, the business disappeared from it’s location and it threw more than a few people at first until word spread they had simply moved two doors down into 1322 North Broadway. It’s the space most recently vacated by Breadshed, which closed in early March. Here’s a little background in case you missed the announcement a year ago.

The new space affords him a basement to utilize as needed and more space on the ground level than the original spot (which was also the original location for KBrew). He said that, while the first year had its challenges, people have responded really well and they’ve been finding the new location. They’ve also gathered a following on their Instagram account, which is another place they’ve spread the word about what they are up to.

The biggest change, beyond the more comfortable accommodation,  is the menu, which now features a much wider range of food. You can now get poke bowls or burritos with a range of seafood choices, or with chicken, pork or beef, for example. The same is true with the various plates. You’ll also find such items as smoked sausage and Nathan’s hotdogs. A range of prepared foods, ready-to-cook foods and fresh food ready to prepare are available every day. Don also had some news: They are about to start managing the 6th Avenue Market and Deli at 1607 N. Sixth. That’s about a half mile from the current store and is reached via Glenwood from Broadway (the road beside their building). It’s not far past the Patricia Nash Showroom as you’re headed north on sixth. It’s a part of town that could catch fire, next. He’s planning to offer po’ boys – oyster, shrimp, fish and more, as well as other upgraded foods.

Be sure to visit both locations and give them your support. I bought a dozen scallops while I was there and I have to say  they made a very fine dinner. Everything I’ve ever gotten there has been fresh and delicious.

While I was in the neighborhood, I stopped in to see Felding Co (1134 North Broadway) owner Luke Lanzoni and check out his men’s clothing store which opened last month. When I wrote the article, the merchandise hadn’t all arrived and the space wasn’t quite ready. He and wife Sandy were working inside and I grabbed a photograph to show readers the very attractive finished product.

Finally, in an earlier article, I hinted at a cool event headed your way at Suttree Landing Park. The dates (August 18) for the Second Bell Festival were announced yesterday by Blank Newspaper. With a backdrop of downtown Knoxville, the festival promises to be a very big event and the promo released yesterday promises “music, comedy, brunch/dress contests, bicycles and after shows.” I’ve heard some of the artists to be featured (not yet announced) and it should be a great day. Organizer Rusty Odom told me, “I am overwhelmed with the initial reaction.” Watch for further announcements in coming days and ticket sales to start soon.