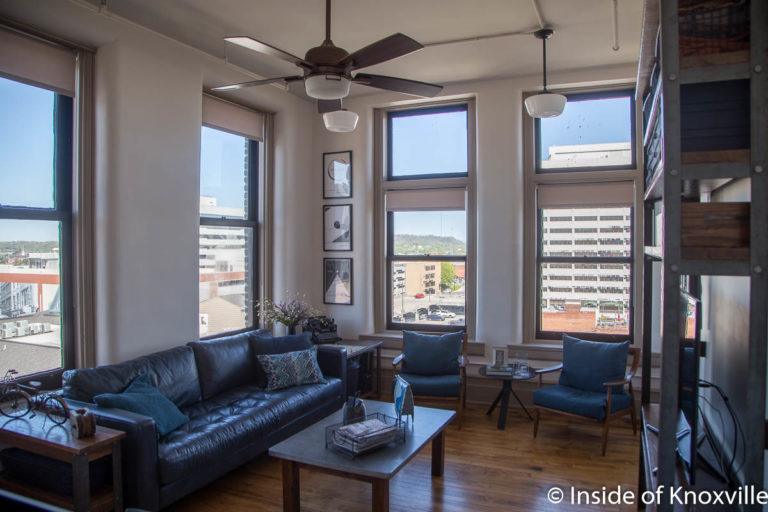 When Tere’s parents heard President Kennedy ask us to consider what we might do to help others, they applied to the Peace Corps, but with five children, they weren’t likely candidates. They ultimately achieved their goal of helping others via the Catholics for Latin America, a group which saw their children as an asset. Asking only to be assigned to a Spanish speaking country, they were sent to Brazil – a near miss in the language department, but after intensive language training they moved to their new home.

Tere was born in Brazil and so obtained dual citizenship. The family returned to Michigan when she was six, but she retains a bit of Portuguese and an international perspective shaped, she says, from the extreme poverty she witnessed there.

Her first experience with Knoxville came when she attended UT on a track and cross-country scholarship from 1984- 89. While at UT she obtained a BS in Industrial and Systems Engineering. She was hired by a Japanese company which had never hired a female. She says while there she learned to really listen to others, learned that personal lives really impact productivity and formed a life-long penchant for neatness and order, which has come in handy as she’s lived in small places. The company expected a completely clean desk surface at the end of each working day and her desk still reflects that ethos.

She says she’d always wanted to be a writer. After reading her first novel at age six, she knew that was what she wanted to do. So, when the company dissolved and she got a severance package, she enrolled in Indiana University where she completed a BA in English and another in Creative Writing.

She applied for a job with Dummies Press (Yes, all those . . . for Dummies books) and started work in their computer division before moving into trade publishing. She worked with authors and free-lanced. She worked on multiple books at once – something that the company hadn’t allowed before. When a book on the topic of running fell apart, she offered to write it. Ultimately, she authored or co-authored 20 books and edited at least 150.

Then the bottom dropped out of the publishing business. Where revenue had never dropped in the history of the industry, it dropped 30% and the unemployment rate rose to around 40%. She took a position as Editorial Director at Girls Scouts of America and around 2009 fell in love with social media and began a self-education process. She was fascinated with the targeted nature of ads and eventually took over social media for the Girl Scouts where her work won a national award.

She decided to move from the city, and given that she was freelance editing, she had her choice of any city she wanted as a new home. She made a list of possible cities and evaluated each based on amenities offered. Knoxville, though it baffled friends in New York City, was her choice as the best personal fit. She realized that when she lived elsewhere, all of her vacations were to Knoxville. She thought, “Why not live there and visit the other places?”

She returned to Knoxville in 2004 first living in the Sterchi Building and, eventually, the Phoenix. She says she loved downtown even before its current resurgence. She was asked to move to Boston for her current job and she declined, much to the puzzlement of her new company, saying she would not leave Knoxville for the job. As a result, she works from Knoxville, though she travels extensively.

She says her New York friends have visited and loved Knoxville. In a strange way, she compares her experience to the Amish who are required to leave their home for two years with the idea that if they return, it is then their choice. She returned to Knoxville by choice after seeing all the world has to offer.

She explains to her New York friends, “What does it matter that there are 5,000 things to do? I can only do one. We don’t have the scale,” but we have what we need. She rides the trolley, buses, uses lyft, has food delivered. She says she puts very little mileage on her car and she feels freed from yard work. She saves money via her lifestyle and, “life feels simpler.”

One of the ways she feels she saves money is that she has to carefully consider each purchase with only 690 square feet. “It’s one item in, one item out.” She says it’s simple and she, “saves money by not buying. Living small allows frugality.” She and her dog Maggie seem very comfortable in the sliver of space atop the Arnstein Building.

The unit includes a view of the Sunsphere and the tops of many nearby buildings. While many people don’t realize there are swimming pools downtown, she counts two she can see from her window. She also has views of Market Square and the building is situated such that on summer evenings she can open the windows and listen to live jazz and other music from the square at just about the right volume.

The apartment, which will be featured on the City People Home Tour on May 4 and 5, features an open design. It’s narrow space required a galley kitchen in the middle, with a bedroom on one end and a living space overlooking Union Avenue on the other end. An efficiently designed closet includes clothing, washer/dryer and other items.

The space has been made more efficient by Tere’s own creativity and construction skills. Some of the pieces are “Ikea hacks,” which she has altered from the store to fit her needs and aesthetic more specifically. She constructed many of the metal and wood pieces she favors, herself. Throughout the home, you’ll notice pieces that she constructed specifically for the space she inhabits, as well as art she had created for her home.

The shelving unit which holds her television and other items was designed to be only as deep as necessary in order to save space in the room. She built a small stand for her printer so it could reside under the desk. She also built the small table beside the couch and designed the mirror in the bathroom, which swings out from the wall.

The home is comfortable, extremely functional, neat and, still, warm and inviting. It’s a great example of what a creative mind can do with a small space. For Tere, living in an urban environment is the initial choice followed by finding a space that affords that lifestyle while accommodating her needs.

The City People Home Tour offers this and many other, very different examples of living in the city. Some homes are quite large, some very traditional and others quite modern. Some offer a view or an outdoor space such as rooftop access or a balcony, some elegance and others an industrial vibe. There is something for everyone who wants to live in an urban environment. Join us on May 4 and 5, see this home and a number of others.

If urban living is for you, you may find just the perfect spot. If not, you may come to understand why so many have fallen in love with downtown Knoxville and their personal spot in the city.