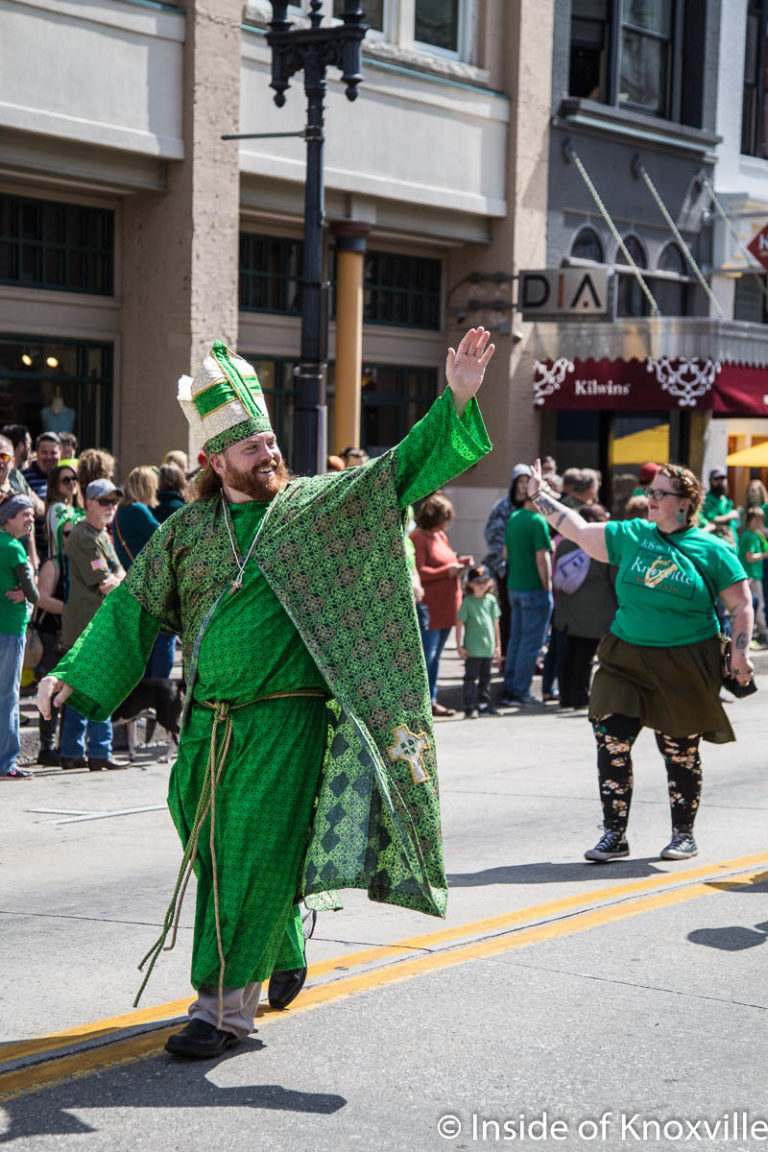 It’s interesting: Knoxville has a tremendous Irish heritage. According to a recent book, Knoxville: Holidays and Festivals, written by Jack Neely and published by the Knoxville History Project, the group held an important place in local leadership: ” . . . at least three of the first seven members of Knoxville’s first Board of Aldermen in 1816,” were Irish. He states the first St. Patrick’s Day Parade of record was held in 1869.

The Irish had arrived in Knoxville in large numbers in the 1840s during the potato famine, helping build the railroads and eventually settling their own part of town, “Irish Town,” located along Fifth Avenue and Magnolia. Patrick Sullivan was an Irishman who built the famous saloon in 1887 which is now home to Lonesome Dove. Another Irishman, Martin Condon, became mayor.

Immaculate Conception Catholic Church was built in 1855 largely to provide a place of worship for the Irish immigrants. The parade continued to be a Knoxville until the early 1900s and, eventually Irish Town ceased to be an identifiable community. Jack notes in his book that, “In 1949, newspaper columnist Lucy Templeton interviewed widow Kate Leahy Ammons. She lived on what’s now the 200 block of Magnolia Avenue, and was believed to be the last resident of Irish Town.”

Fast forward somewhere around a hundred years from the last St. Patrick’s Day Parade and Knoxville’s version of the event returned last year. Continuing this year, it is in its second year in modern history, but it’s important to note that this is a Knoxville tradition – albeit suspended for decades – that goes back about 160 years.

With that context, Knoxville held its St. Patrick’s Day Parade this past Saturday with a mix of past and present. The parade was heavy on local politicians running for various county, state and national positions. I decided to skip those in my photographs because, among other reasons, inevitably, I would have gotten good photographs of some and not of others. It didn’t really connect to the parade, anyway. I made one exception for a former president who fits the parade theme perfectly.

My favorite theme that ran through the parade was the families who were represented, some with four generations and each with an Irish heritage. It gives the parade a feeling of authenticity. Of course, amid the wash of green from one end of Gay Street to the other, we had St. Patrick,  himself, walking in the parade.

Catholic Charities had a large presence, as did some other Catholic groups, which seemed fitting. A large number of men wore their kilts proudly and there were bagpipes enough to satisfy the biggest fan. The largest group of bagpipes were also accompanied by a small contingent of drums, and I’ve made clear numerous times how strongly I feel about drums in a parade: they make it.

The crowds were strong and many wore the green. I’ve never quite understood about the holiday that, “everyone is Irish.” We don’t all claim to be a part of the other various groups who have days, parades or events. But it was all in good fun and, as the green beer flowed on Market Square the fun increased at least to some point in the night.

This, as you might expect, is only a portion of the photographs I took. I’ll post the remainder later on the Inside of Knoxville Facebook Page.