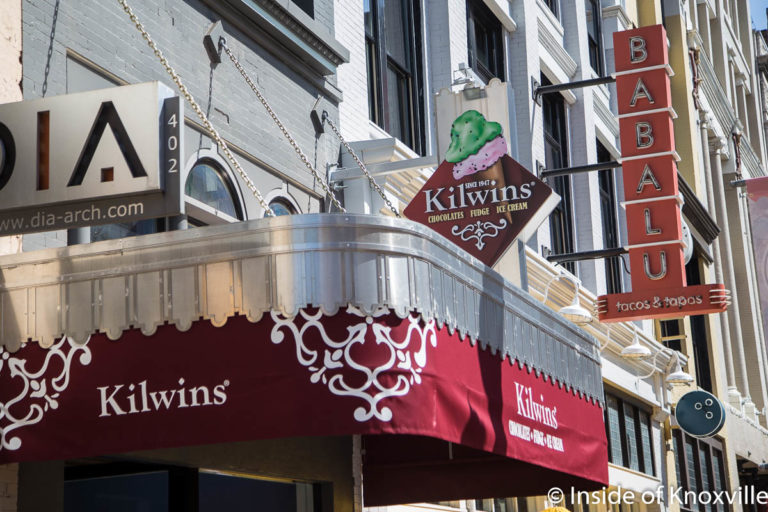 Kilwins, 408 South Gay Street, Knoxville, March 2018
Christy and Matthew Moore, owners of the new Kilwins at 408 South Gay Street were working quickly and intensely when I dropped in on Sunday to check out the new business. Store Manager Phoebe Spooner was reminding them that they should eat lunch – at 3:30 in the afternoon. Vicki Morgan, Kilwin’s VP of Development skillfully made fudge while new employees worked through their training regimen.

The store opens today and the excitement among the staff was contagious. As mentioned in the article introducing the store, this will be the second franchise the couple has opened and the two are passionate about the product and the concept. Matthew said, “I don’t love the ice cream because I own the store, I own the store because I love the ice cream.” He’s also proud of the program of hiring diverse young people and bringing them together to make a team. So far, they’ve hired twenty-one high school and college students.

It all starts with the fudge and the ice cream, though the store offers a range of products, many of which are made in the store. The centerpiece of production is a 900 pound marble table in the front of the store where the fudge is made while customers watch. The same recipe and method has been used since the first store opened in 1947. I enjoyed a sample of the fudge and the ice cream and they were both delicious.
Vicki, who has participated in opening over 90 stores said that she loves that so many people have strong memories of growing up enjoying Kilwins’ icecream and fudge. She said someone stopped her the other day and asked if this was the same place as those in Michigan. When she told them it was, they began telling her of memories of going there as a child with their parents.

In addition to the hand-paddled fudge and the range of ice creams, you’ll find hand-dipped caramel apples, caramel corns, peanut brittle and more. Shakes and sundaes are also offered as well as a range of candies boxed or available for single or mix-and-match purchase. There are 32 flavors of ice cream and the waffle cones are made-on-site. Matthew was very keen on the hot chocolate which is available in the store as a drink or a mix to take home. Ice cream is also available in quart boxes if you want more than one helping.

The store is also stocked with Easter candies for the season, including the twenty-two pound chocolate bunny you see in the picture with the owners. Many gift options are available and the store sells ice-cream cakes and caters parties. They offer shipping of any of the gift items.

Store manager Phoebe Spooner is from Knoxville and “proud of it.” She grew up in Fountain City and attended Central High School before attaining her BS in Advertising from UT in 2017. She worked for local advertising agency Designsensory, and really enjoyed, “the opportunity to work with dozens of incredible entrepreneurs and ambitious start-ups.”

Realizing that she enjoyed growing brands, she set out to create her own. “Two half-completed business plans and a visit to the Knox Entrepreneur center later, I realized that I needed a to build a new set of skills and left the agency.” She knew Knoxville was and would always be her city, so she set out to grow her skill set working with different local businesses.

After working downtown for around four years (Bliss, Fizz and Marriott), she felt she needed, “to learn about business opening, brand building and business operations, so I was so eager to connect with Matt and Christy about the Kilwins position. I couldn’t think of a better way to continue growing as a manager in this capacity. I am so pleased to be back face-to-face with customers, creating the brand experience in real time, and sharing lots and lots of ice cream.”

The store officially opens today, but has planned a Grand Opening for April 21 to coincide with the Chalk Walk and the Sidewalk Sideshow. Store hours are seven-days-a-week, 10 AM to 10 PM. You can follow them on their Facebook page or learn more on their website.