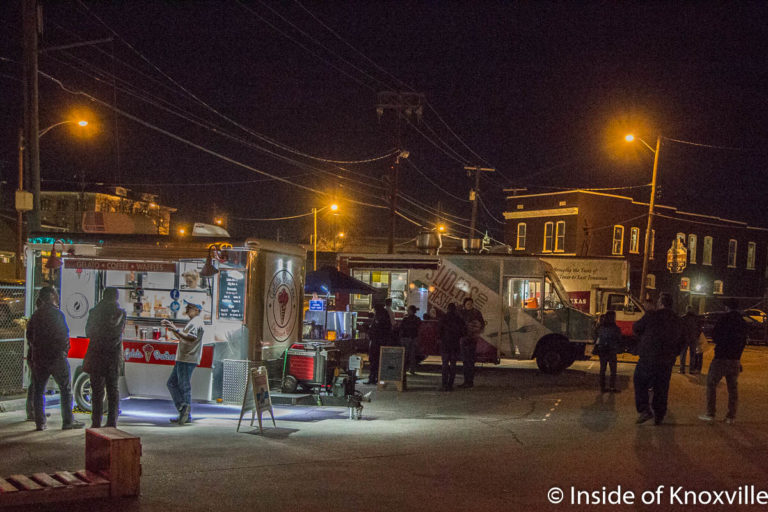 Alden Larrick told me it was probably the worst weather weekend they could have found when the Central Filling Station (original article with all the details) officially opened its gates on an improbable Thursday on the first day of February. Determined, she and co-owner and husband Scott decided to proceed and were delighted to find a great turnout. Despite very cold temperatures and rain three out of the first four days – with sleet falling at one point – people showed up, bought food and held close to the fire pit.

While the numbers have fluctuated with the weather, the response has been steady from the beginning, with hundreds coming through on good weather days and dozens on bad weather days. The 150 seats currently available at the picnic tables and bar are already proving inadequate at times. I dropped in on a cold Friday night and found a pretty good crowd acting as if it wasn’t cold out.

Most days they are open (Thursday through Sunday), you’ll find four food trucks in operation, though they sometimes squeeze in another couple of smaller operations – like some of the food carts we all enjoy. Space limitations and connection limitations preclude larger numbers at this time. Future scheduling involves shifting trucks from lunch to dinner to provide more variety (as many as eight to ten trucks in a day) as well as to deal with the fact that crowds are so large on some days that the trucks sell out of food.

There is no shortage of interested vendors, as the couple currently has relationships with over thirty food truck operators. The couple has enjoyed working with them and finally meeting them in person after communicating electronically in the lead up to the opening. Alden says they’ve made new friends among the various food truck operators and it’s been fun seeing some of them meet each other for the first time, swap food and begin to form relationships of their own.

In coming weeks, changes will be obvious in the park. In addition to expanded seating, Alden says they’ll be adding more shade, landscaping and an art project. Small box gardens will soon appear with a mixture of ornamental and edible plants. She says you should expect to see some small difference every time you drop in.

The support from the community has been very gratifying. Crowds have included nearby workers on lunch breaks, residents from the nearby neighborhoods and – a bit surprisingly – people from other cities and states who seem to gravitate to the park. She says they are keen to share the similarities and differences between the food truck park scene here and in their own cities.

The park will also begin to feature a range of special events. They’d planned a grand opening for this weekend, but given the dire forecast, they’ve opted to spread the planned activities over the next few weeks. March 24 will feature their first musical group, New Johns Creek Grass, and they will have a series of brunch and browse events featuring a range of local vendors.

If you visit, you’ll find portable restrooms with hand sanitizer – and soon running water. The park is wheel-chair accessible and ADA compliant. You’ll also find canned beer (a lack of plumbing prevents always having beer on tap) which is sourced from regional breweries. They also have cider and non-alcoholic drinks. What you won’t find – at all, by April 1, is Styrofoam, as they have worked with vendors to find alternatives.

Much of the infrastructure has been built with re-purposed products. You’ll find large electrical spools in use for tables. Pallets from local companies have been deconstructed and put to use as has a large shipping container you’ll find on site.
You can find the upcoming schedule of food trucks on the Central Filling Station website and you’ll notice some continuation of trucks you’ll recognize – along with quite a few over the next two months who have not operated in the park during the first month.

Ride your bike and get a $1 off a beer or take advantage of the ample street parking all around the park. Current hours are 11:00 AM to 10:00 PM Thursday through Saturday and 11:00 AM to 6:00 PM on Sundays. The hours may be extended as the summer months approach, depending on demand. Find the latest on the website, Facebook, Twitter and Instagram.