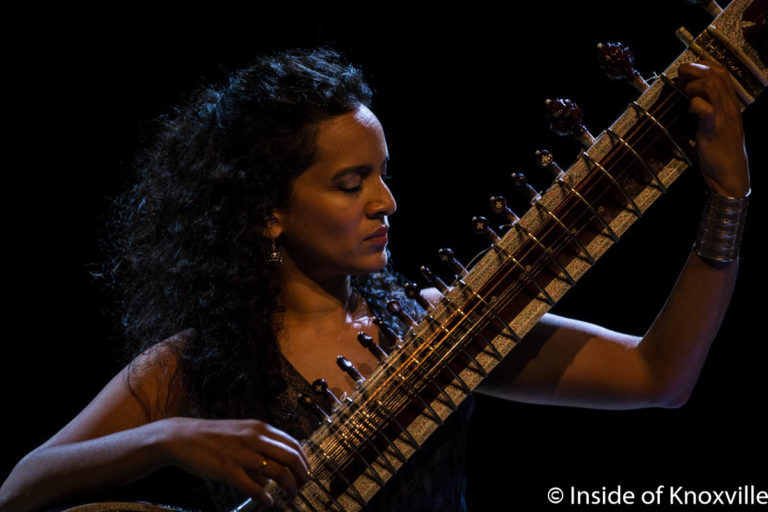 Twenty-one hours in I had seen one happening, two films and eleven shows. It was time to slow down a bit and take stock of the overall event. Each seems to have it’s own personality and also some commonalities with other years. First up: the weather was cold and damp. Not a great combo for a festival, but not so bad for one that features indoor shows.

The biggest impact of the weather, from my perspective, was that it dampened the social, on-the-street vibe a bit. Not that it shut it down. I talked to people from Miami, Nashville, Louisville, Gainesville, Austin, Phoenix, Los Angeles and Norway. I overheard British accents, French and German and other languages. Still, the streets were filled with people scurrying from one event to the other in weather that wasn’t completely hospitable to standing around chatting.

I had charge of a three-year-old to start the third day. A no-go for Big Ears, right? Not so fast, my friend. Billy Martin, percussionist for Medeski Martin and Wood, played Kidstuff, so Urban Boy and I set out to catch the 10 AM show. Billy waded in playing all sorts of found-objects for the kids before ultimately engaging them in stridulation with the use, not of body parts, but of bamboo. The kids had a blast.

The biggest miss of my Big Ears experience this year was not hitting Rhiannon Giddens’ keynote speech which, I understand, was spectacular and included lots of music pairing her with others playing the festival. I missed it out of exhaustion, opting for a one-hour nap that turned into two. I did catch the end of Bela Fleck and Abigail Washburn at the Tennessee, which followed the keynote.

Two stories related to the couple: She’s somewhere around eight months pregnant and did her usual buck dance, declaring it was “doctor approved,” as the audience waited for an early arrival to drop on the stage. Also, the night before, the story was told that Bela Fleck walked into a coffee shop in New York City with his banjo in a case. The proprietor asked if it was a banjo and was assured it was. He asked, “Can you play like that fella, Bela Fleck?” to which Bela Fleck replied without hesitation, “Nobody plays like Bela Fleck.”

After that show, I caught some of John Medeski playing classical works on the piano at St. John’s Cathedral and then walked to the Bijou for Jason Moran, this time with legendary percussionist Milford Graves. The two had never played together. According to Ashley (I asked) they didn’t have a chance to rehearse. They just sat down at their instruments and improvised for an hour. It was beyond magical. Another absolute high point.

Mr. Graves played with sticks, hands and elbows. At times he appeared to be climbing through the drum kit. Meanwhile Mr. Moran danced all around the piano. Literally. He moved from one side to the other during one portion dragging what appeared to be a bag of metal pieces over the strings inside the piano, producing a screeching sound which fit perfectly with Mr. Graves drumming and occasional scat sounds. The two had an incredible musical connection.

Because of the flow of the shows, I only caught a few minutes of Alice Coltrane Turiyasangitananda: The Ashram Experience at St. John’s Cathedral. It can best be described as Hindu lyrics set to black gospel music. Joyous and moving. I regretted that I couldn’t see more. While the festival runs very close to schedule, irregularities happen: Moran and Graves ran over and Ashram started late, meaning I had to scoot to see the final show of my day: Anoushka Shankar at the Tennessee Theatre.

The daughter of Ravi Shankar, Anoushka began learning sitar from her father at age seven. She also attended high school in California where she was homecoming queen before setting out for a career in music. She’s likely the world’s best sitar player after her father’s passing and is a six-time Grammy nominee, as well as half-sister to Norah Jones.

Musically, she has stretched well beyond traditional Indian music, though she remains comfortable there. Her work has become increasingly experimental and now incorporates a blend of Indian and western instruments. Audiences tend to come and go during shows at the festival. Not so much this one. People stayed and were rewarded with a stunning performance from her latest work, “Land of Gold.”

I ended the day early – at about 8:30 – because rain was setting in and the next show I would have like to see was at the Mill and Mine – quite a walk from the Bijou. I’d seen Jerry Douglas a number of times, so it made the decision a bit easier. That and the prospect of drenching my camera. Still, 6 1/2 hours and six shows wasn’t a bad day at all. And the music was spectacular.

My final day started with the radio show, of course, so I was mid-day getting into the festival groove. I picked carefully to allow myself some room to breathe and eat something other than M&Ms and to end early enough to write Monday’s article.

I started off by continuing the jazz theme with the Tyshwn Sorey Trio at Mill and Mine and enjoyed them from the mezzanine, taking it easy and enjoying their spin on the genre tremendously. Add brunch and it would have been perfect.

Seeing a little break in the musical schedule, I made a misstep by deciding to see another movie. I just kept thinking my luck would change, but “Seeking the Monkey King,” was so not my thing, that I left before it finished, which is not usually something I would do. It consisted of what appeared to be metal mashing and grinding into other metal for most of the film, interspersed with occasional screeds against the U.S.

While some of the criticisms of the country are, I feel, warranted, it became very tiring and began to feel sophomoric, like a college student who just learned that the U.S. based much of its early economy on enslaving people and committing genocide and now feels obligated to tell the rest of us repeatedly and in strident terms. In my opinion, it left art behind for polemics. Didactic art isn’t art in my artistic perspective. Or maybe, for the third time, I just missed the point of another movie.

But, thankfully, there was more wonderful music awaiting. Julie Byrne, a singer-songwriter, gave a delightful set of well executed songs, between which she told the audience the story of an acid trip and invited each and every one of us to meet her and have a conversation after the show. I saw her later at another show, so I don’t think she was detained too long with her line of new friends.

I ended my festival with two consecutive shows at the Bijou. Bangs is a “group” that has been together six years and performed four times. Jason Moran made one final appearance on my festival schedule as a part of the group along with Mary Halvorson on guitar and Ron Miles on various horns, French and otherwise. It was another in a string of amazing Jason Moran-influenced performances that, in the end, had to be my favorites.

The second show featured Lucius, a four-piece band fronted by Jess Wolfe and Holly Laessig who, it has to be pointed out, are not twins, sisters or even related. They give that illusion by wearing identical wigs and clothes and harmonizing in a way one might expect siblings like Wilson-Phillips or the Everly Brothers to harmonize. Their songs are catchy indie-pop ballads and more upbeat songs. They harmonize on every note, so it’s definitely a distinct sound. I felt I could have happily ended with Bangs.

As it was, day four and the festival ended there, for me. About 8 1/2 hours including four shows, one movie and time to breathe in-between. So, in the end, I took in about 36 hours over the course of four days, seeing three movies, one event and twenty-two shows. It concluded another great event for the city, if somewhat impacted by the weather. I can’t wait until next year when I’ll be joined by Urban Brother who will join me and bring his musical training (MA in Piano Performance) to bear on my ignorant musical musings.

Look for that photo drop of 237 photos later today on the Inside of Knoxville Facebook Page.