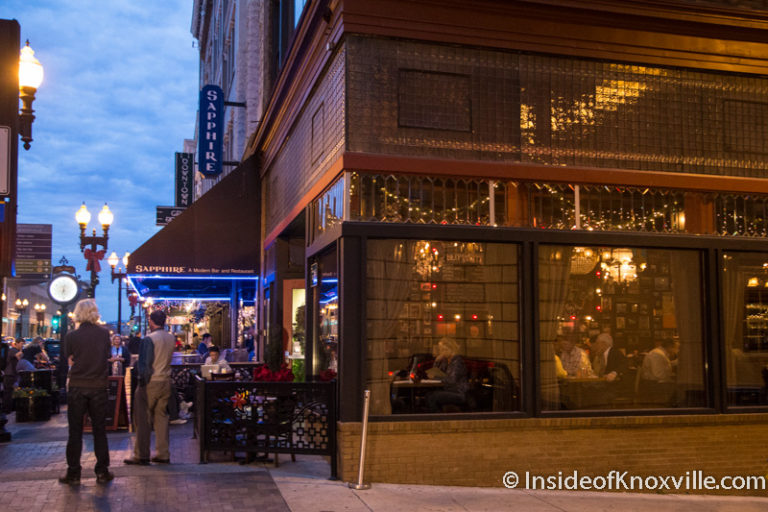 It’s been sometime since a major business on Gay Street closed its doors. Restaurants, in particular seem to be bustling with waits often the norm. For Urban Woman and me, this one stings a bit as it was one of our favorite restaurants – particularly for brunch, but often for dinner, especially when we had out of town guests.

For us, from the time they opened, a visit to Five felt just a little like traveling without leaving town. Maybe it was just the chandeliers which gave it a bit of a fancy touch without all the fuss. And we really liked the food. We liked the simplicity of the five choices. My fish was always just right, the shrimp appetizer could not be beat. We often made a meal of just that.

The brunch hit all the right notes for us. I love a little jazz in the background and when we could get an outside table on a warm Sunday morning, the volume of the band was perfect. The crab cakes and beignets were always perfect. We did notice that sometimes not as many people joined us as we might have expected.

Still, it was a surprise when I was contacted by co-owner Chris Eddings this weekend with the information that Five would close at the end of this week. Sometimes businesses start to feel like they may be struggling, but if there were symptoms of this closure, I missed them. And we will miss them.

We also had one of our most profound Thanksgivings there, eating at the table with a homeless man. The restaurant opened its doors every Thanksgiving to anyone, regardless of ability to pay. Those who paid or made a donation had their money given the love kitchen. All the labor and food were donated.

Also missed will be the free meals they provided to area subsidized-housing facilities. Through their American Lunch program, they took fresh food to local people in need. Employees volunteered (eventually earning a bonus for the work) to serve those in need via the American Lunch truck. It was a much appreciated human gesture for many of the residents.

Five is a chain restaurant – Knoxville was their fifth location – but they never felt like a chain, to me. With their charity work and relationship with groups like the Love Kitchen, they really tried to integrate themselves into the community. In the end, however, rent has to be covered, employees paid, food and supplies purchased, and enough has be left over to make the business worth remaining open. That apparently didn’t happen.

Last night Cris forwarded this letter to Knoxville and asked that I share it:

We regret to announce that we will be closing our restaurant ​FIVE at the end of this month.

We fell in love with Knoxville when we got here, and we are still in love with it.  We had hoped to do great things, but businesses have to be profitable to survive.  We gave it our full effort for almost 4 years and we are just not able to continue.

I​t is always disappointing when forced to close a business, ​but it doesn’t stop there.  We hate to let ​our employees down – ​people who have given us a significant portion of their lives.  ​All of our workers will be given severance pay and job offers at our other locations.  ​It’s upsetting to disappoint our loyal customers who showed amazing support ​over the years.  We regret not being able to continue the operation of our American Lunch program and ​our Thanksgiving Day feast to support our friends at The Love Kitchen.

Thank you to everyone for the incredible memories.  The relationships we have built will always be held close to our hearts.  Our landlord, neighbors, and friends have been the best any business could ask for, and we can’t express enough gratitude for the support they have given us since the beginning.

Knoxville is an incredible town with great restaurants. We leave hoping you know that we are deeply humbled to have been a part of your culture and hospitality.

With utmost respect and appreciation,

So, in the end, there’s not much more to say. Not all businesses will succeed, but this is one that I thought would be in the city for a long time. If you are so inclined, stop by and wish them well this week. They may not be local, but they’ve been good neighbors.