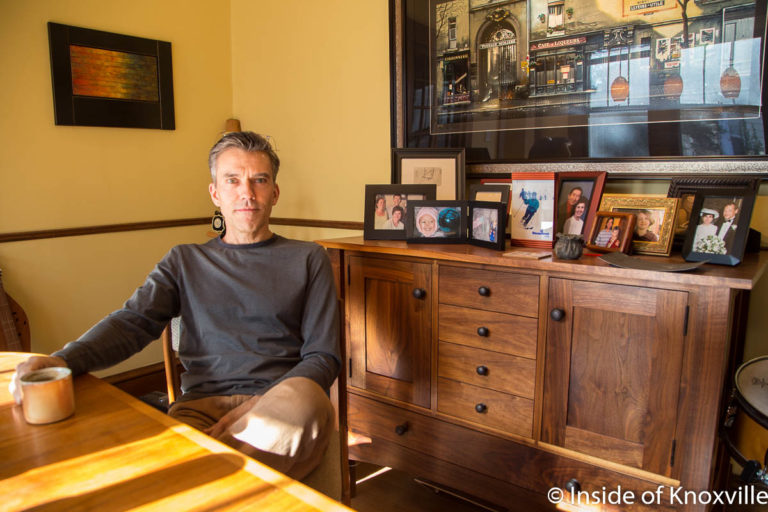 There’s an old question: How does a writer (or substitute your profession) make a million dollars? Answer: Well, you start with two million . . . The joke could certainly apply to inventors who may sink thousands of dollars (or much more) and years into various inventions to see them be undercut by a better product or a copy of the invention by a better-heeled company. Or perhaps everything goes perfectly, but the product just doesn’t sell. And then there is the pet rock – the ageless example pointed to by everyone searching for that one idea that becomes a game-changer.

Brett Burdick has seen it all. He’s been a part of a successful launch – as a member of local company Fi-Shock in 1996, he developed a lighted flying disc (think “frisbee,” but don’t say it – it’s a patent thing) which functioned better than others it followed. It gained some traction and landed Brett on the November, 14, 1996 cover of Metro Pulse.

Originally from Idaho and an electrical engineer by training, Burdick started his career working for Honeywell in Phoenix, Arizona. While there he developed a wind shear detection system which proved to be very successful. He came to east Tennessee to work for Tom Boyd (Randy Boyd’s father) in 1995 with his Fi-Shock company, which was an electrical fence system for dogs. While there he developed his flying disc.

When the company was sold in 2005 and he found himself out of a job, he began consulting, but continued inventing and building. He worked a bit with DeRoyal in product development. He reconnected with Tom on his Happy Dog DNA project. He began woodworking – he built the beautiful cabinet behind him in the photo you see here – after taking a class through Arrowmont. He developed and patented a golf putter, which he took through development, manufacturing and marketing. A manufacturing flaw and an unscrupulous company was his undoing in that venture.

He traces some of the qualities that drive him back to his parents who were DIY devotees before that was a named thing. His dad was an entrepreneur and builder who was always working on something. While he didn’t work so much alongside them in their projects, he feels some of that curiosity, drive and inventiveness must have come through.

His latest venture is the development of a featherboard. Some of you might ask precisely what a featherboard might be. I would have been one of you. It turns out it’s an important piece of equipment used in woodworking which makes cuts straighter and safer by holding the board firmly in place. The traditional model with two pivot points can be awkward and time consuming to use. Brett’s version, the Hedgehog, has a single pivot point and a design that enhances both ease of use and safety.It works with band saws, table saws and routers.

Patent is pending on the invention which you can see demonstrated in the video included here. After four years, numerous design changes, days of 3D printing, trial and error, research, patent applications, marketing, major expense and much more, the new design seems poised to become an overnight success. It’s been a long journey, but he says he finds the response to be surprising, almost as if it’s been his personal obsession so long he doesn’t quite know how to respond when strangers like and re-post his Instagram photos.

The product sold out on Amazon (he’s currently sending them a second shipment of twice as many Hedgehogs) and it is selling well through the website. It’s been given an enthusiastic review by Marc Spagnuolo (the Wood Whisperer) and a national woodworking company is considering adding it to their online store. A review should be coming soon in a national woodworking magazine.

On the market starting December 20th, people nearby (Tom, a master woodworker at Ironwood Studio, loves it) and faraway are buying it, posting their own videos and photographs and generally raving about it. Brett’s father, Earl, was supportive and made suggestions early in the process, but died before production began and Brett’s subtle inclusion of Earl’s initials on each hedgehog has gotten a great response from many woodworkers who appreciate the value of a mentor.

In the end, whether it becomes a big sensation or a modest success, Brett is pleased with the product. He says the four years development time made the product much better as he made changes in response to suggestions of woodworkers and others along the way. It’s quite a different product from the original prototype and, he feels, a much better one.

If you’d like to purchase one for yourself or for the woodworker in your life, the most direct (and local!) way to do so is directly from the Hedgehog website. Brett will personally package and send your very own Hedgehog featherboard. Amazon will also have them again, soon.

Brett’s is a great example of the entrepreneurial spirit embodied in the current Makers’ Movement. It started with an idea which was followed by four years of persistence, effort and determination. It’s the kind of small-scale operation which most of us don’t know is going on all around us. It’s a thing to celebrate.