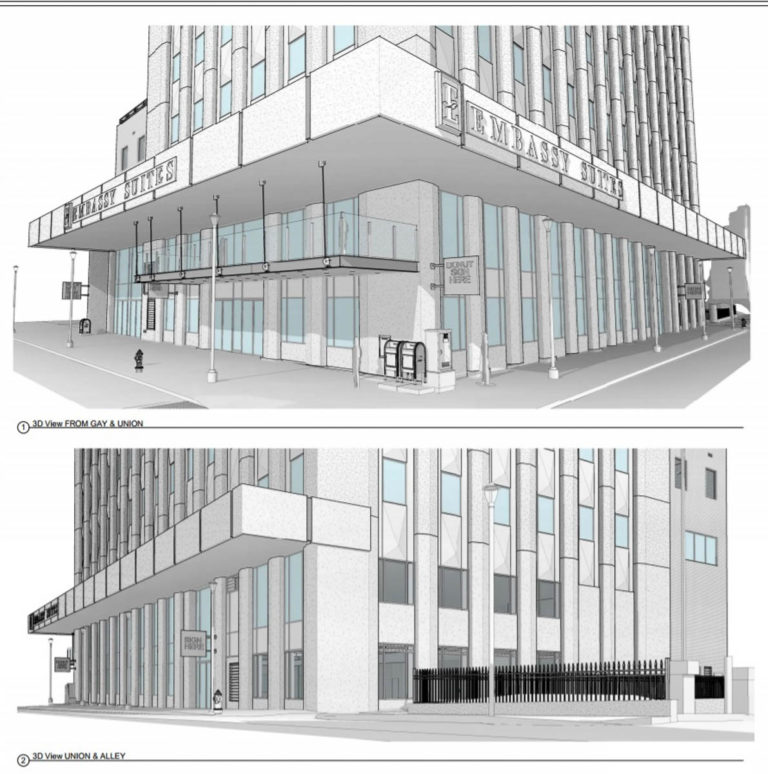 It’s been nearly three months since the announcement that the Conley Building at 505 – 507 Gay Street would become an Embassy Suites. The long under-utilized building sits at arguably the most prominent intersection in the city and development, long overdue, had been entangled in legal wrangling between the owners. Very few details were included in the original announcement, but an implication that the project would be sensitive to its location and would include more than the hotel itself as a value for the site was intriguing.

Preliminary designs were revealed this week and the proposal holds some exciting details which were not previously mentioned and clarifies others. At street-level there are changes planned for each side of the building. Most minimally, the south side, facing Krutch Park would have vents for the kitchens and two additional doors for egress and a possibility was discussed for something further – some patio seating, but that would involve additional variances.

On the western, or alley-facing side windows would be added where artwork has existed for a number of years. Windows would also be added to that end of the building along Union Avenue, allowing for a commercial space on that end of the building. The business which will assume that spot has not yet been determined. An entrance to the hotel will be situated along the Union Avenue side adjacent to this commercial spot.

The biggest changes are proposed for the side of the building facing Gay Street. A balcony is planned to replace the overhang currently covering the sidewalk on that side of the building. It would continue to provide cover for pedestrians passing below, but would also provide outdoor seating on the balcony which would stretch slightly further around the building than the current cover.

But it is what is inside and around the front of the building that offers the really big news.

Two well-known and beloved local businesses will occupy spaces just inside the front (and main) entrance to the hotel on the Gay Street side. K Brew plans to have a coffee shop, their third location, for both visitors and guests and, opposite them on the front of the building will be a new location (I’m assuming second location) for Makers Donuts. Guests will arrive through the front doors and pass between the two businesses before passing a water feature and indoor tree on their way to the front desk.

To the left (south) side of the front of the building will be two additional and separate entrances. One will lead to the elevator to the rooftop. Open for guests during the day, the space will be available for lounging and enjoying some of the best views of the city, as well as the planned roof-top swimming pool. At night the pool closes and the space will be open to the public and will be open as a full roof-top bar. The other door leads to possibly the biggest news revealed in the plans: Long time downtown favorite restaurant, Knox Mason, chef Matt Gallaher’s original concept, plans a move from its original home on the 100 block of Gay Street to the featured mezzanine location in the Embassy Suites. The balcony seating mentioned earlier will be for their use. I spoke to Matt regarding the change and he said the following:

We have outgrown our space and . . .  We’ve had an amazing 5 years on our sleepy little block but it’s time for us to stretch our legs a little. The timing of the Conley Building project couldn’t have been more perfect so we’re very excited to be part of continued growth and development downtown.

Our Knox Mason team is a mix of seasoned veterans and eager and ambitious new faces and I’m really looking forward to see what they’re able to do in a bright, shiny new space. Obviously we won’t be able to replicate every little detail but our core has always been and will continue to be to represent locally sourced Southern cuisine with hospitable service.

But with more space we’ll be able to offer a larger menu, and your readers will be happy to know that our guests will benefit from a little more room to stretch out as well. We’ve been so blessed with the support at Knox Mason and Emilia over the years.

Also announced in the preliminary plans: The hotel hopes to have seating on the sidewalk in front of the Makers and K-Brew locations. That side – Gay Street – would also be the location for valet service for hotel guests. In the discussion, it was also made clear that, while they would like to have control of the property, the small parking lot to the west of the building between the alley and Krutch Park is not in their possession at this time.

The entire project only recently began demolition and is still roughly a year from completion, so all the details contained in the proposal from which these details were drawn are tentative. Numerous decisions regarding signage, windows, interaction with Krutch Park and more have yet to be determined. It’s possible some of the businesses named as partnering could change, though that seems less likely.