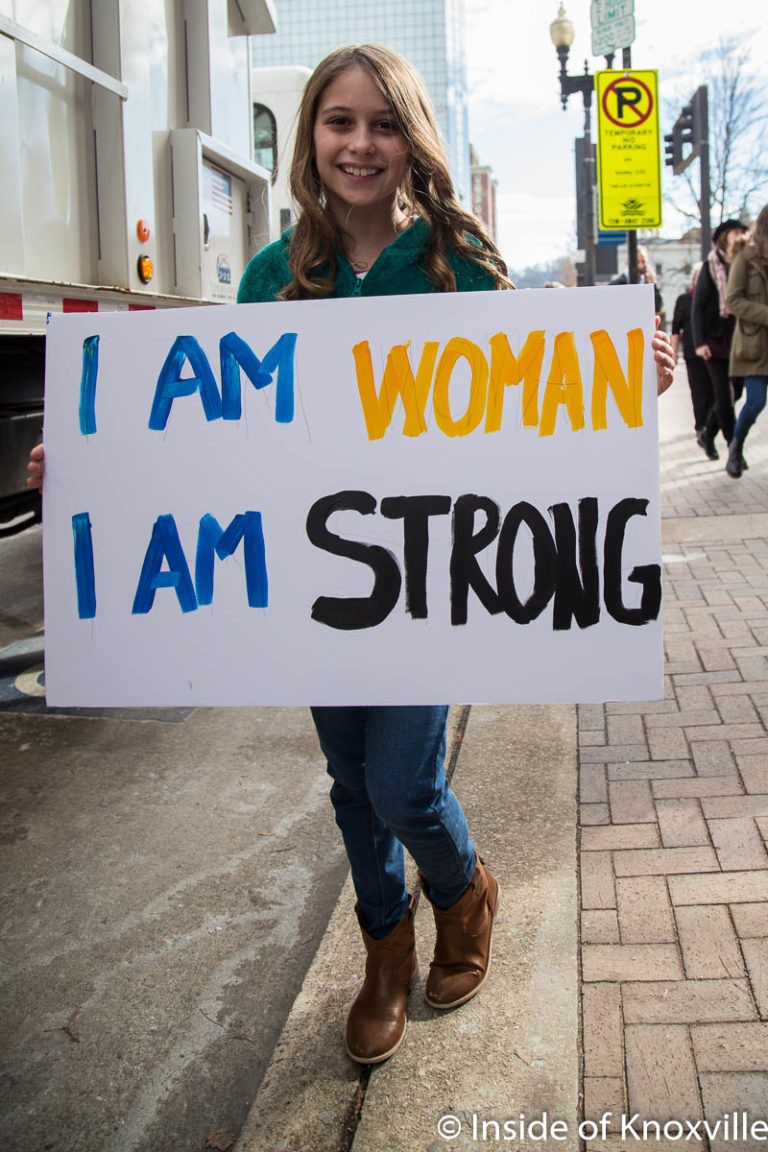 It’s been a year since the original Women’s Marches took to the streets all over the world and made an unprecedented statement in Knoxville. I noted last year that in my 35 years in Knoxville and having observed many demonstrations of various stripes, I’d never seen anything like it. The crowds, estimated at 3,000 to 5,000 dwarfed the largest demonstrations I’d ever seen here. Typically measured in the dozens – if that – there was nothing in our recent history to compare.

The, then recent, election of Donald Trump as the forty-fifth President of the United States had stunned many and, while there were many causes represented at the marches, they were widely understood to be a reaction against him personally. Seen by Trump’s supporters as sore losers, “get over it,” became a familiar refrain for those opposed to the marchers.

It was a fair question: Would the marchers, “get over it?” The marchers had accomplished one thing: Previously inexperienced organizers had, in very short order mobilized perhaps the largest march in recent Knoxville history. But what would happen next? Would these women and their supporters retreat to their previous level of involvement? They marched, but would they vote?

The national answer to that question has been fairly consistent and clear in the year since: More women than ever are running for office and are being elected. Locally, our recent city council elections reflected the national trend. Women won in every single district in which a woman ran. Four newly elected women joined our city council in December and none of them had ever run for office before.

Still, as the date of the Women’s March 2.0 approached, I wondered how it would compare to last year’s march. It’s been a year, perhaps some of the enthusiasm had waned. As the announcement was made that the Traditionalist Workers Party (a white nationalist group led by Matthew Heimbach and best known for their involvement in the Charlottesville protests) would join in support of the March for Life, an anti-abortion group holding a rally on the World’s Fair Park, I heard some women say they may stay away for fear of violence.

The other cultural shift that has happened in the last year, and which may have played a part in attendance of this year’s march, was the #metoo movement. Women in large numbers have publicly discussed the sexual harassment or sexual assault they have experienced. The issue played a pivotal role in the Alabama senatorial contest that saw that deeply red state elect a Democratic senator for the first time in a generation.

The answer to the questions of sustained energy and intensity was perhaps more stunning than the numbers attending the march last year: Knoxville police estimates put the attendance of this year’s march at 14,000. That we are talking about a small city the most conservative region of a conservative state puts that number in sharp relief.

You might argue that one or more of those groups has silent support that puts their group at a different level of support than that reflected in the numbers from a one-day snapshot, but it’s hard to argue who is more motivated. Will it translate to the voting booth going forward? That question will dominate state and national politics for the next ten months.

Regarding the rally and march, there were differences readily apparent from the beginning: Streets were barricaded and a much larger police presence was apparent than would have been true the past. The Traditionalist Workers Party marched in formation from the Locust Street Garage. The rally was held on Krutch Park and security searches were required at a single entrance.

Unfortunately, many people missed the rally because they were standing in the line to be searched. At its worst, it snaked the block out Clinch to Gay, went south a block on the western side of Gay, before crossing Gay and heading north for a half-dozen or so blocks. This was forty-five minutes after the beginning of the rally. As a result, no photograph will capture the full crowd in Knoxville. It’s unfortunate that one security check point was provided to screen the twenty TWP attendees and the same number of check points was provided for 14,000.

A major shift seemed afoot to me in terms of theme. While thousands of people attending a rally are going to reflect a wide range of opinions and focus on very different issues, far more posters reflected a focus on voting, elections and, specifically, mid-term elections.

After the rally, the group marched out Market Street to the federal courthouse and back along Walnut to Union before returning to Market Square and dispersing. Plans are underway for another march a year from now. I’ll have another 120+ photographs of the march on the Inside of Knoxville Facebook Page later today.