Knoxville Has a Theater District? A Brief History of Knoxville’s Theaters: Part Four of Four 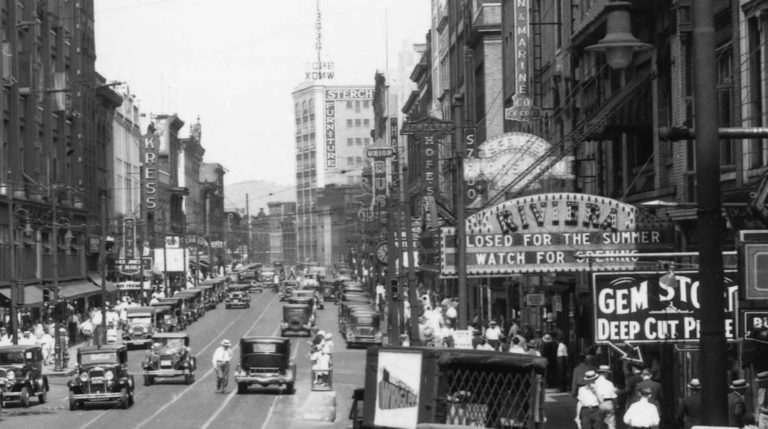 Here is the final part of Oren Yarbrough’s four part series on Knoxville’s rich history with theatres. If you haven’t already done so, please check out the first three (Part One, Part Two, Part Three). It’s really a rich and wonderful tapestry Oren has woven so beautifully.

I should also point out that these great photographs have a source. Steve Cotham, longtime manager of the McClung Historical Collection requested in a comment yesterday that I “share address of the digital collection of Calvin M. McClung Historical Collection (cmdc.knoxlib.org) from the Knox County Public Library website with your readers where more historic photographs of Knoxville can be seen. Some of the photographs in the preceding article are from the Thompson Collection on our website. There is more to see and the images can be enlarged to see more detail.” Please visit them and support them.

With great thanks to Oren, here is the final portion of the series:

For this next part I will bundle two theatres together since they both were started by the same person and one had a much longer life than the other on Gay Street. In 1911 the Bonita Theatre opened in the 500 Block of Gay Street somewhere around where our giant Christmas Tree currently stands. The Bonita was a very short-lived theatre that was opened and managed by Charles Champe until 1913.

Charles Champe also opened another theatre in 1911 on the 400 Block of Gay Street called the Gay Theatre. By 1917 the Gay Theatre was renamed the Strand Theatre and shortly after was remodeled to compete with the larger movie theatres a few blocks to the south. According to online sources, The Bonita & The Gay Theatre were sold by Champe because he joined the local movie projectionist’s union and members were not allowed to manage or own a theatre.

While the Bonita quickly became another retail infill on the bustling Gay Street, the Gay Theatre saw a very fulfilling existence as the Strand Theatre. With a capacity of around 600, the Strand Theatre was one of the smaller venues in downtown Knoxville during the early 20th century. Described by the Knoxville History Project as “durable”, the Strand hosted a variety of film types over the decades and also was a place for children to watch Saturday afternoon films. The photo above shows children standing outside the Strand before the film “Rustler’s Roundup” featuring silent film western star, Tom Mix.

In 1949 the Strand closed her doors for good and the space became retail for a couple of decades. Sometime over the next 50 years the structure that housed the Strand was renovated and the façade altered to what it looks like today. Around 15 years ago this building and its neighbor that sits directly on the corner of Wall & Gay was converted to downtown lofts. Some parts of the interior walls (ed. Lerner Lofts) are still left exposed in the lofts, so if you ever get a chance to explore the inside, you might see remnants of its past life as the Strand Theatre.

In addition to the Strand Theatre, the 400 Block of gay street also was home to 2 other theatres that were smaller and played short nickelodeon films. The Rex Theatre and the Crystal Theatre were both on the west side of Gay Street next to the Kress Building. The theatres opened around 1908 & 1912 and ran for a number of years until Miller’s Department store expanded sometime in the late 1930’s. It is this expansion that is the newest home of Bliss and Tori Mason Shoes on Gay Street.

For a period of years in the 1930’s if you were not a frequent visitor of downtown Knoxville and you were looking for the Rialto or the Crystal theatre you would likely be pretty confused. Trying to nail down the specific locations and time frames of these two theatres is difficult because a number of venues on Gay Street and Market Square were home to each at one point or another, sometimes the same building taking turns housing each one in sequence over the years.

The last of the small theatres, before we get to the finale, is the Majestic Theatre, which opened in 1908 as the Lyceum Theatre on the 300 Block of Gay Street. In 1910 the Lyceum changed names to The Majestic and operated until around the mid 1930’s when neighboring department store, S.H. George and Sons, purchased the building and expanded its retail space. The expanded structure and a handful of other buildings were torn down in the 1950’s for a new Grants Department Store. The department store was given a face lift years ago and is currently the TVA Credit Union at the corner of Wall Avenue and Gay Street. The Majestic will forever be famous as the theatre James Agee described going with his father to watch a show at in the Pulitzer Prize winning novel, “A Death in the Family.”

To conclude the series, let’s consider the Gem Theatre, an African American Theatre that operated on Vine street for half a century. The Gem Theatre first opened in 1913 at 102 W. Vine Avenue and was a successful venue for the then segregated population of Knoxville’s African American community. The location of the Gem was in the heart of other successful African American owned and operated businesses, such as those owned by the locally famous figure Cal Johnson, and around 1921 the theatre expanded and built a new venue across the street at 106 E. Vine Avenue.

The new Gem Theatre, with a capacity of 2,000 people and which straddled First Creek, was a vibrant venue that played host to both movies and famous live performers like Bessie Smith & Billie Holliday. In 1939, a fire destroyed the whole theatre and it was rebuilt shortly after in a more modern style and only as a movie theatre. This new style and layout of the Gem Theatre is probably how people would most likely remember it that were alive in the 1940’s and 1950’s.

The Gem operated until 1964 when it was closed around the time Knoxville’s theatres were desegregated. The structure remained in this location until around 1972 when the whole block was razed to the ground in preparation for the new James White Parkway & restructuring of First Creek. This first phase of demolition eventually would be a part of the immense and destructive creation of Summit Hill Drive through downtown and over James White Parkway.

Today, the site of the first home for the Gem Theatre still exists at 102 W. Summit Hill Drive, the address having been changed after the construction of the connector. The small cluster of buildings at the corner of Summit Hill Drive and Central Street are all that remains from the entire intersection that once stood in this location 50 years ago. The second building in the series is a non-descript grey stucco apartment building that was renovated a handful of years ago. One the ground floor of this building is where the first Gem was created back 100 years ago. The newer location of the Gem did not have the same luck and today it is the site of the Downtown Dog Park.

I really hope everyone enjoyed reading this series on Knoxville’s theatres, both lost and preserved. My research was during my free time and was mostly fueled by my love of historic architecture and the mysterious nostalgia of a lost era of prosperity Knoxville experienced a century ago. Can you imagine what it would have been like to wander Gay Street’s “Theatre District” in the early 1930’s when we had a half dozen in operation at any given moment? What this city lost to time and progress, is sad to consider. Let’s take pride in our remaining theatres and fight to preserve them for future generations.

If you find inaccuracies in my texts, feel free to let me know, but please be gentle in doing so since I am only human. Thank you!