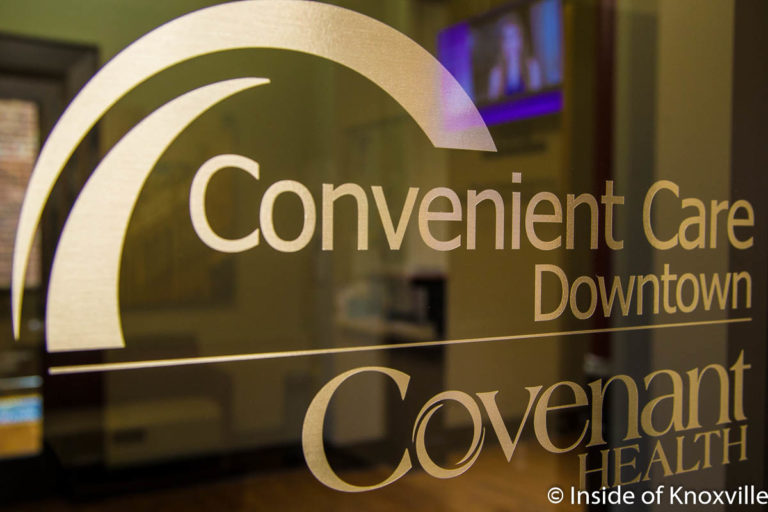 It’s been almost two years since Covenant Health opened its Convenient Care Clinic in the Phoenix Building (behind the Phoenix Pharmacy and Fountain at 418 South Gay). During that time, the supervising physician, Dr. Jeff McMichael, and the primary care giver, Nurse Practitioner Tiffany Marshall have remained with the clinic and watched it grow to include a Medical Assistant (Marcie) and an office manager (Anny). Additionally a second Nurse Practitioner, Anna Niare works in the clinic part time.

The clinic, which currently operates from 8:00 AM – 6:00 PM, Monday through Friday, has seen a steady increase each month in patients. The patients, represent a large cross-section of Knoxville, from working poor down the Broadway corridor who can take the bus into downtown, to residents from all the surrounding condos and apartments, downtown workers and a number of out-of-town guests at the downtown hotels.

The clinic, which initially served as a walk-in clinic only, began offering primary care and, increasingly, many patients are utilizing those services either as their exclusive primary care or as an adjunct to their primary care. All records from visits are easily shared electronically with any patient’s primary care physician, if they have one. Popular primary care services have included flu, tetanus and pneumonia shots, physicals and biometric screenings. With Covenant’s extensive network, they can easily make referrals for further care should that be necessary.

Tiffany said that initially, the clinic would see days with few or no patients, but word of mouth began to spread. As people used the walk-in services and were happy with the help they found, they tended to return for primary care services. One thing she’s noticed is mid-week spikes which she attributes to downtowners wanting to be sure we’re better for our weekend plans. That sounds a bit familiar to this Urban Guy. She said it’s also more prone to seeing patients from other cities and even countries and that’s a contrast with their other clinics.

She seems as enthusiastic about working at the downtown clinic as she did nearly two years ago and says she still loves working at this clinic. It’s changed a bit since the initial phase, but she finds it continuously interesting.

I also checked in with supervising physician, Dr. McMichael who has deep roots in the community. Born and raised in Knoxville, he played football for UT and has a, “vested interest in this town. I enjoy taking care of this community. Downtown is diverse, leading edge, trendy and I love the development.”

Noting that changes in primary care delivery have dictated that more physicians are in supervisory roles, such as his, he says the positive side to this is that he can, “extend myself and invest in the next generation.” He’s enjoyed working with Tiffany and he’s been happy to see how many patients have appreciated her care.

He feels Tiffany will continue to grow the business and that they will expand services, if not space in the future. He says they are at about 70% capacity for their current staffing and facility. He has hopes they’ll add an x-ray machine and other equipment, and can envision growing to the point of having a full-time physician and needing to move to a larger space (they currently have two examination rooms). He says the most important thing, at every point in their growth is to, “do everything with excellence.”

Slip in and check out the office and introduce yourself. Look for an opportunity to use their primary care services. To say this is an important downtown asset seems a gross understatement. Medical care is an essential component of re-building our downtown into a complete city. As with other services, we’ll support it or we’ll lose it. It looks promising, but it’s important that the growth continue and that downtown residents and workers avail themselves of the services offered.