A Market Square Business Closes to End the Year 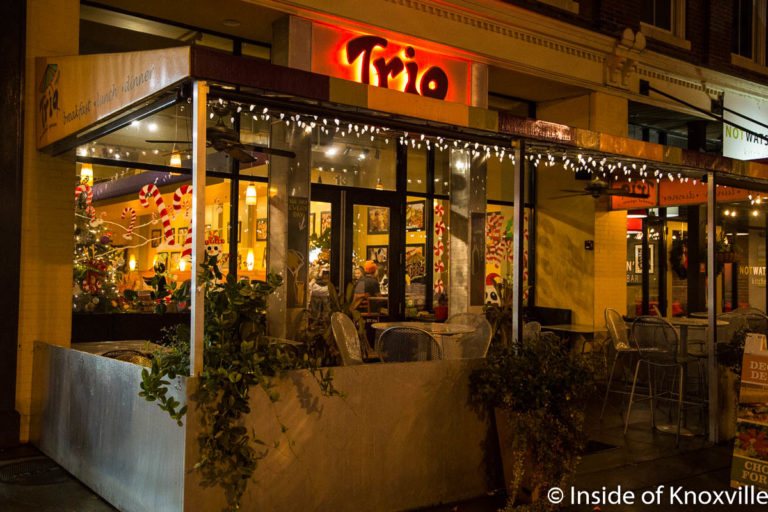 For a spot that sits at the heart of who we are as a city, a place that we consider the center of whatever good has happened to Knoxville in recent years, Market Square showed a remarkable volatility in 2017. Do you realize that through the year two businesses closed (Cocoa Moon, Rita’s Ice) and three left the square (Local Motors, Bliss, Tori Mason Shoes)? New entries included the Knoxville Chocolate Company, Rock Paper Hair Studio, Lillian Ruth Bride by Wedding Wonderland and 19 Square Bar and Asian Kitchen.

And that was before New Year’s Eve which saw a final change as Trio closed at 13 Market Square where it had operated since 2007. A final party was held that night for employees, featuring bonuses and interviews for positions elsewhere. Owner Adrienne Knight has always valued her team and she ended the run by showing that.

In recent months her attention had been divided between that location and Holly’s Gourmets Market where she is Director of Operations.”Obviously it’s an emotional time for all of us, the last few months balancing the intense catering season at the Gourmets Market, the busy season on square with the addition of the ice skating rink and turning around to shut down Trio has stretched me very thin.”

She was put into the position when her Trio investor also bought Gourmets Market just over two years ago. She loves working with Holly and says, “Holly and I do make a great team! We come from completely different angles with the same goal in mind which makes it fun and interesting! We plan on doing some trailblazing ourselves inside the Gourmets Market in 2018 but that’s probably a story for another day.”

And so, an eleven-year run that saw its share of awards (“Best Salad” in several publications, multiple years) and successes has been shut down. Businesses, like all of us, have life cycles and this one ran its course. That eleven year span represents some remarkable shifts for Market Square specifically and downtown in general.

I’ll end with a personal side note: My wife and I, along with friends discovered Trio early. I loved a particular breakfast dish they had when they opened, but eventually stopped carrying. We must have found it very early because by Labor Day, 2009, when Urban Woman (to-be) and I realized we had no obligations for the day and decided to go downtown for the morning, we naturally went to Trio, as had become a habit.

How do I remember the day so specifically? Because that was the day we made the decision that put us downtown. After breakfast we walked around day-dreaming about “one day,” and talking about which buildings were our favorites. We’d been on a number of the City People Home Tours, so we had some knowledge of many of them. One, in particular, caught Urban Woman’s eye that she’d never noticed before. She fell in love.

Three units were for sale and she made me leave a message for a realtor immediately. Within eight weeks we’d sold our west Knoxville suburban home, bought one of these units and moved. It was a sudden decision unlike any other we’d ever made before, to move to a place completely different than any we’d lived before and it would change our lives in great ways we could not imagine. And it started with breakfast at Trio.

I’ll miss Trio as a go-to spot on Market Square for a quick, inexpensive and good cup of coffee. We’ll miss the patio as a great place to people-watch and run into friends on a Saturday morning at the Farmers’ Market. I’ll miss knowing Adrienne is downtown, even as I wish her and Holly the best out west. I may even venture that far toward the burbs to see them sometime.