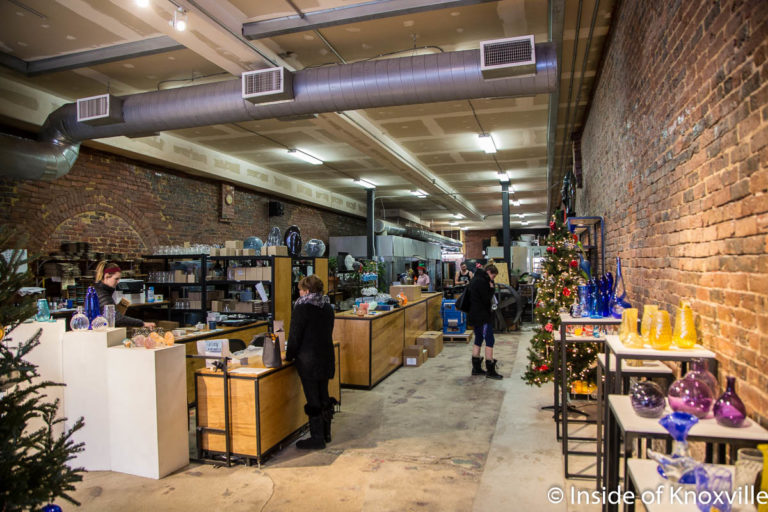 It was three years ago this month that Matthew Cummings brought his Pretentious Glass Company to the Old City at 133 South Central Street. He moved the business here from Louisville, Kentucky, and the glass studio – both a production studio as well as an exhibition space for the glass – has been a success from the beginning. But that may not be the biggest part of the story.

For that, you have to go back to 12/12/12. That was the day that Matthew opened his Etsy store, with the hope of selling twenty-to-thirty of his signature beer glasses a month in order to help fund his passion: the glass sculptures he continues to produce. The income from the fine art was unpredictable and sometimes not enough to make a living.

It wasn’t his first rodeo with a new idea. He’d previously attempted other items and ideas to little to no success. One of his favorite failures – and one that cost him a lot of money to launch – was the production of modern Venetian vases. If you enter the shop and ask him, he can show you an example of these vases. That’s because after the launch, his total sales were zero. You can understand why selling twenty glasses might have felt like an optimistic stretch.

He wondered if people would be willing to spend the amount of money on a beer glass that is required to make it worth hand-producing the items. Starting in the middle of the holiday season five years ago, he remembers the thrill of getting ten orders from people he didn’t know. He met his modest sales goals from the beginning and continued selling glasses steadily for the first seven or eight months. Then Huffington Post published an article about the glasses.

Overnight his “part-time side hustle,” as he calls it exploded and he found himself with three months of back orders instantly. He stopped everything else and began blowing glass for ridiculous hours each day, doing his own shipping and sleeping very little. In survival mode, he worked eighty hours a week. He describes that period as “feed myself, blow glass, nap, repeat.”

The surprise out of it all was that the orders didn’t slow down after that initial burst. He remained two to three months back ordered for two years. Even then, he thought perhaps the trend would fade. It didn’t and he became the second largest Etsy dealer by volume in the world. Yes, as in the universe.

Meanwhile, store sales have rapidly escalated. While I was there to interview him, we had to keep moving out of the way of the customers who flooded the store. A long line formed at the register. And this all comes even as the standard glasses he sells have sold out for the year. In fact, they officially sold out on 12/12/17 – the five year anniversary of the Etsy shop.

The confluence of the Maker movement and the craft beer movement fell at just about the time he launched and he attributes much of his success to that fact. Saying they’ve shipped over 10,000 glasses this year, he mentioned one order that came in from a Manhattan company for five hundred glasses. He also said holiday sales escalated early this year when Etsy featured the company in a video shared (see below) with their other sellers.

To deal with the increase in sales, he’s hired new staff. He has four regular full-time employees in the glass studio and right now he’s running five glass blowers and three-to-four people working on shipping. He’s hired Gwyn Jones to work full time on front-of-house sales and on the gallery. She’s a local artist who producing her art under the name Gwyn Pevonka. Beginning in January, she’ll reorganize the exhibition space and separate it more from the sales area. She’ll also begin much more extensive programming than the shop has offered in the past.

He emphasized as we concluded our interview that he failed many times and while it might look easy at this point, it was pure stubbornness that kept him going. He says he has worked with a vision at times, but rarely specific long-term plans, calling it, “more of a flow.” He dreams of taking it to the next level with a small glass manufacturing factory.

Pointing out that most glass blowers use a common or shared studio and blow glass as a hobby, he feels like he’s living a dream to have his “own studio in a beautiful building in a beautiful city and to become a professional brewer. All my hobbies are what I’m doing for a living.”

If you haven’t gotten by to check the studio out, do so. The Pretentious Beer Company is next door and they will have some big news in the month of January. Stay tuned for that.