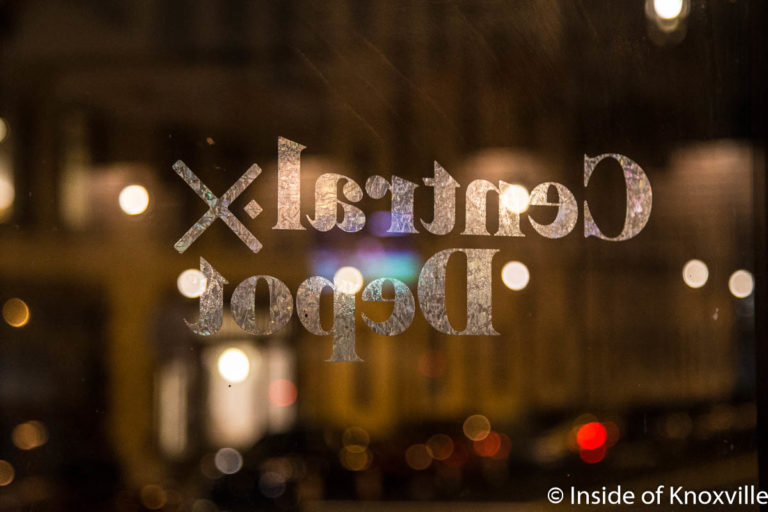 For those of you playing along at home, the correct answer would be at the corner of Central and Depot. Trick question. Knoxville’s newest addition to both bars and businesses moving to the north near the Depot and beyond, opened its doors softly last week and a bit more loudly last weekend.

Central Depot has been a long time in coming and it arrives in a space perfectly suited for such an endeavor, and it fact, built for just this purpose. The Dewhirst Properties owned building is currently called the 1894 Saloon Building because it was built in that year for that purpose. As with many Dewhirst Properties, it is now a multi-use building including the new bar, office space and apartments.

I met recently with co-owners Will Bolduc and Danny Carter to get a few details on their backgrounds as well as the story of what led them to this particular venture and what the public might expect at the new business, which is located in an exploding area of downtown – across from White Lily Flats, on the same street as the massive Regas Square project, a block from The Mews a couple from Public House, Magnolia Records, Tennessee Valley Bicycles and the coming Mews II.

Will is from Maryville and went to high school there before becoming a semi-professional musician, touring with bands for six years. During that time he bartended to make ends meet and, as he said, “fell in love with the business.” In 2011 he became a Mixed Martial Arts fighter, eventually holding a title in his weight class and signing a professional contract before putting that on the backburner for this project.

Along the way, he’s picked up an admiration for well-made cocktails and has made a lot of friends in the industry, having worked the last five years at Blackhorse Brewery. He will be the one designing the drinks which he said will lean toward the traditional. He considers the new business a, “local and regional tap room with good cocktails and a focus on local breweries and distilleries.

Danny was born and raised in Knoxville and is also a musician, playing drums over the years for various cover bands. In college he switched from a music major to an accounting major and he brings that expertise to the new enterprise. He’s been involved in a couple of bars prior to this one, starting in 2006 when he hired a young bartender named Will, having no idea they would eventually be business partners.

He sold his share in the first bar in 2010 and moved to Charleston where he enjoyed being near the beach. At Christmas of that year, he returned to Knoxville for a visit and found that the bar he’d left was closing. What followed was a six-year run before he decided, once again, to sell his share in order to open his own place. He wanted a partner – recognizing he needed someone to complement his skill set and when he mentioned that to Will, Will responded, “That’s me.”

And so, the two began scouting locations and making plans. Will felt strongly they should look in the downtown area, but more on the edges of downtown. They both liked Public House and A Dopo and started looking in the vicinity. They love the near-downtown, north-side area and decided they wanted to be a part of growing the Depot District.

They hope when you visit the small, warm spot they’ve built, you’ll find a friendly, laid back vibe that is open, accepting and relaxed. It’s not pretentious and they hope to attract all sorts of customers, mixing people from different walks of life and backgrounds into a comfortable social situation.

As it stands, you’ll find some cool train/city-scape art over the center of the floor and a massive map of Knoxville and the area on the wall. Lots of exposed brick and seating at tables or at the bar is available and the massive windows frame a pretty view of the White Lily Building, the Old City and the Southern Depot.

They plan to have locally sourced bar food, which will all be clean – they have no fryer or grill. They plan to have wraps, salads and toasted sandwiches. They also may coordinate with food trucks for more extensive offerings. It is their plan to compliment rather than compete with area businesses, so they don’t plan to be a full restaurant, but would rather be the place you enjoy a drink before or after your meal.

Danny added, “I love the industry, too: You get to put on a show every night and then go home when it is over.”

You’ll find them at the corner of Central and Depot, just a block across the tracks from the old city. If small, cozy and historic sounds like your kind of space, you’ll like this one. Join them for beer, wine or cocktails and give them a “like” on their Facebook Page. They are open from 3:00 PM to midnight, Monday through Thursday, 3:00 PM to 1:00 AM Friday and Saturday and from 3:00 PM to 11:00 PM on Sundays