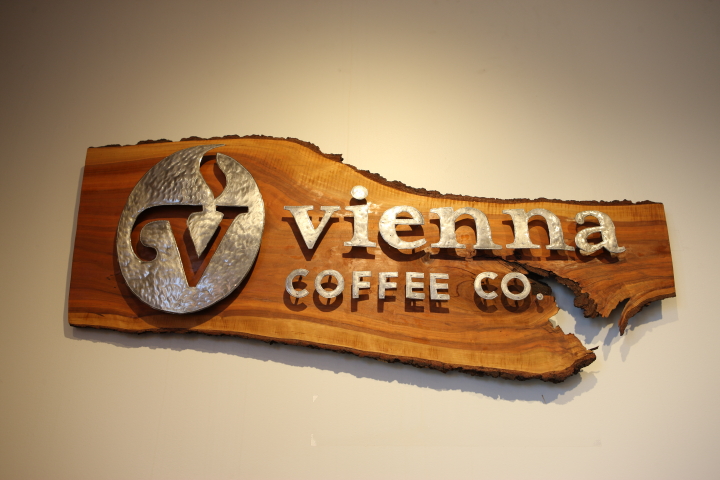 You might say John Clark is a coffee connoisseur. Actually, that’s an understatement. It’s like saying Henry Ford liked automobiles. Clark, the owner of Vienna Coffee Co., turned his passion for java into a business that spawned a successful brewing company and two retail locations, first, Vienna Coffee House in Maryville, and now, a newly opened locale in the historic Regas Building located at 318 N. Gay Street in downtown Knoxville.

The new Knoxville location, dubbed Vienna Coffee at the Regas Building, officially opens its doors this Friday, December 1 at 3 pm as a lead in to the First Friday celebrations and Knoxville’s annual Christmas Parade. There will be a ribbon cutting ceremony at 3:30 featuring the building’s current namesake, Bill Regas. The public is invited to attend. Door prizes, free samples, coffee brewing accessories, French Presses, brewers and gifts will be given away every half hour, with music by Red Shoes and Rosin, Pistol Creek Catch of the Day and quantities of beer extending the festivities into the early evening.

Although this marks the new Vienna Coffee’s official unveiling, the coffee house unofficially opened its doors to the public two weeks ago. Despite construction next door and limited word of mouth, it has already attracted customers drawn to its 80 varieties of coffee and a modest selection of sandwiches, light meals and pastries.

Of course, its the coffee that counts. The coffee will continue to be roasted in the Maryville store location and delivered to the Knoxville cafe twice a week to ensure its freshness and flavor. Clark promises it will conform to the company’s exacting standards, beginning with the coffee beans which are specially imported from growers in Guatemala and Ethiopia. In addition, Clark promises a new original flavor each month, with variety and originality being key criteria.

As befits the traditional role of a coffee house, as originated in Europe and the Middle East, Clark sees each Vienna Coffee House as a gathering place, where people can meet, talk, socialize and enjoy one another’s company while sipping on an exceptional cup of coffee. “We’re all about community,” Clark insists. “We look for places where there is a specific neighborhood vibe, locations that offer opportunity to fit into that community and become an essential element in that identity”

To that end, Clark envisions adding live music to the menu and offering monthly “cupping” events — coffee tasting opportunities for his staff and anyone else interested in expanding their knowledge, learning the coffee vocabulary and testing their ability to evaluate it when it comes to flavor, color and content.

Clark hopes to attract workers and residents from all over downtown and he’s hopeful that a new condo and retail complex under construction next door will eventually bring new clientele in, as well. Then again, the Regas building has always had a reputation for serving up hospitality; aside from housing a number of major not-for-profit organizations, the site, at the corner of Gay and Magnolia, was previously the home of the Gathering Place Restaurant, a landmark locale in its own right.

While Clark had initially considered locations in North and South Knoxville, Madisonville and Murfreesboro, he was eventually swayed to open in the present 3,000 square foot location when Chris Martin, president of the Knoxville Leadership Foundation, proposed the idea of refurbishing the existing space. The infrastructure, he noted, was already in place. The seating area is expansive enough to accommodate both intimate gatherings, business meetings, or anyone who simply drops in for a solo cup of joe and an afternoon snack.

An interior brick wall that lines one side of the room gives a kind of rustic feel, a nice contrast to the fresh, open, airy look provided by the expanse of windows offering a view of the activity taking place next door. A series of oversized photos that illustrate the coffee making process “from seed to cup” (in Clark’s words) on the room’s farthest side, becomes another compelling expression of Clark’s vision of Vienna Coffee as a place that provides a welcome respite.

With sixty percent of American adults claiming to be coffee drinkers, and the success Starbucks has seen in casting coffee as an essential additive of everyday life, Vienna Coffee Company’s ability to offer a better brew has clearly found its niche. Clark claims he’s already scouting out a third location to be based in South Knoxville and that his goal is eventually to have five cafes in all. For now anyway, downtown coffee lovers have renewed reason to bask in the brew.