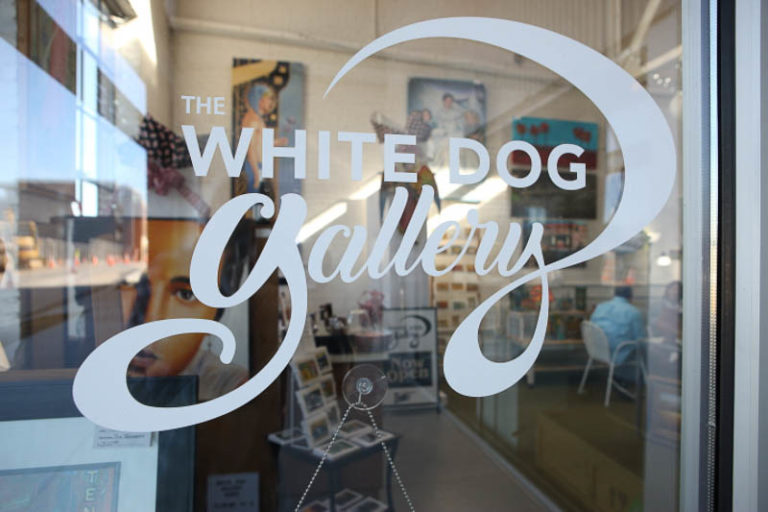 If it’s true as some say that an appreciation for art lies in the eye of the beholder, then credit White Dog Gallery, the newest art boutique in downtown Knoxville, with offering something artistic that everyone can enjoy. Even a cursory glance beyond the doors of the amply stocked gallery, located at 514 West Jackson Avenue, reveals a sumptuous potpourri of visual delights, ranging from original paintings spanning a seemingly endless variety of styles and mediums, to sculpture, jewelry, and artistic objects and curios of every description.

Then again, owners Clarke Hinkle and Lindsay McClanahan are art aficionados themselves, and it was their common appreciation for artistic imagination that inspired them to open the gallery in mid-October.

“I’ve been an art enthusiast for 40 years,” Hinkle says. “And this is something I’ve wanted to do for 40 years.” While he personally didn’t start painting until four years ago, he has plenty of friends who have spent decades creating art. He says White Dog Gallery will be a place where they can share their work, offering them an opportunity that they might not have had otherwise. Most of the artists and crafts people whose works are on display are locals who eagerly display their creations on consignment.

Hinkle and McClanahan met at the church they both attend and they then bonded over their mutual love of the visual form. McClanahan, a budding artist herself, is also an expectant mom, so on the day of our visit, it was Hinkle who there to greet us. Both amiable and enthusiastic, he was only too happy to show us around his well stocked space.

Indeed, there was a lot to see. While the 1,000 foot interior is of an industrial design with its unpainted open ceiling and overhanging pipes and ventilation, the walls and floor are taken up with colorful creations of every kind. Abstract paintings, landscapes, surreal images, photographs, gifts and imaginative objects of all descriptions immediately draw the visitor’s eyes and practically beg for closer inspection. Indeed, there seems to be something for every taste and personal preference. Nearly 20 artists are represented by their work so far, the majority of them painters, but sculptors, photographers and other artisans display their creations as well.

White Dog isn’t limited to offering exhibitions, however. The space is also available to rent for parties and corporate gatherings. Behind the building there’s a large courtyard, complete with an ancient looking iron trellis and an extended brick wall, giving the environs a decidedly old world ambiance. Hinke says White Dog Gallery has already hosted three receptions in the short time since opening their doors — last month’s soft opening launch, which was attended by over 300 people, and two subsequent open houses as part of the First Friday celebrations. In addition, there are four bookings for outside entities slated for the coming weeks.

Hinkle himself is no stranger to hosting and hospitality. He’s worked in the restaurant and retail industries for a good portion of his career and also organized weddings and parties for the parishioners at his church. Still, his hope was that he would one day have the chance to open a gallery and indulge his appreciation of art.

Given Knoxville’s growth as an area where admiration for art and creative commerce seems to flourish, Hinkle says that the environs are ideal for new ventures of a visionary variety. He points to the increasing number of annual art festivals and events the city has hosted in recent years. “Asheville and Chattanooga have long had a reputation of being art-friendly cities,” he notes. “But Knoxville is coming into its own. The art scene is flourishing and thriving here, and it’s now at the point where artists can actually live and work here as well.”

He and McClanahan were eager to embrace the city’s cultural evolution, one reason Hinkle takes a substantial portion of time spent at his day job as a kitchen and bathroom designer, handyman and construction designer to spend much of his work week in the gallery.

“Why only do this halfway?” he asks himself. “This was an opportunity to be a part of what’s emerging here, to be involved with people’s lives and share in the beauty that they create. We’re fortunate to be able to provide a space where artists can express themselves, share their work and give others opportunity to enjoy it.”

An art collector since childhood, Hinkle says his individual tastes lean towards works by Monet, Warhol, Pollack, Dali, and surrealist Nall Hollis. (“I like realism with an occasional odd quirk,” he winks.)  Many of the works at White Dog reflect a similarly imaginative style of imagery, particularly the surreal family portraits that find its subjects at a banquet that appears to be hosted by Alice in Wonderland. Then there’s the paint-splashed guitar that hangs near the entrance to the courtyard. Other scenes, seemingly inspired by storybook settings, are visible throughout, a contrast to evocative landscapes and intricate abstracts that take up floor space as well.

“I’ve always been fascinated by what goes through the artist’s mind,” Hinkle admits. “It’s always been my desire to try and discover what the aims are.”