What the Heck is the Tennessee Archive of Moving Image and Sound and What are They Up To? 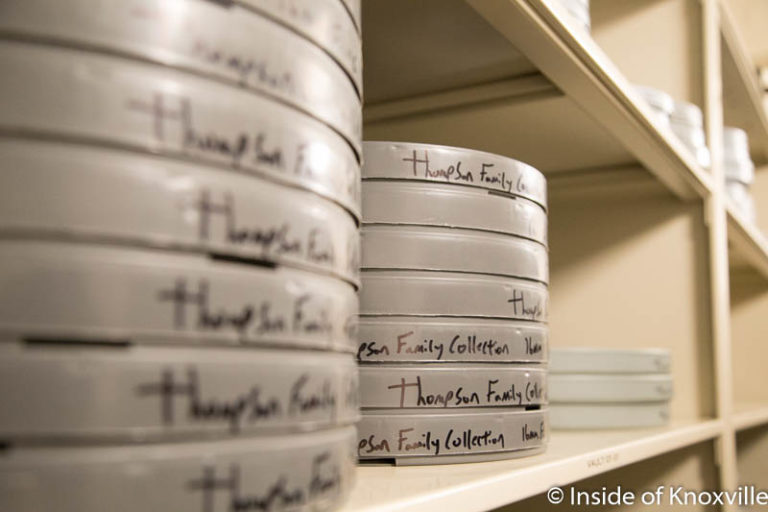 It’s got a long title and it may seem a little inscrutable at first. The title references the state (not the University), but what you’ll mostly find inside their walls buried in a basement at the East Tennessee History Center is a rich treasure-trove of east Tennessee recordings – both audio and visual. Easily the most comprehensive collection of rare recorded history about our region, a first encounter with the Tennessee Archive of Moving Image and Sound archives can be overwhelming.

The genesis of the collection and the original guiding vision for the archive belong to Bradley Reeves and Louisa Trott. Bradley, originally from Knoxville, attended the L Jeffrey Selznic School of Film Preservation in Rochester, NY, before beginning contract work with the Library of Congress. He met Louisa, who’d received her MA from the University of East Anglia in Wales, at a conference, and ultimately the two determined to move to Knoxville to form a regional archive.

Archives have also been established in Memphis and Nashville, a number of regional archives that current director Eric Dawson says is unusual in a single state. Bradley and Louisa ran the collection out of their home at first, convincing people they were legitimate and that they should be trusted to assume ownership of the rare recordings they began to accumulate. I wondered what would prompt someone to give up their historical treasure to someone who says they are taking it to their home and Eric described Bradley as a, “evangelist for film preservation,” noting he can be very persuasive.

Eventually, the couple teamed up with the Knox County Public Library’s McClung Collection and found a home in the basement at the East Tennessee History Center. The basement includes the cold storage necessary for preventing deterioration of film. While I knew that the attics and barns where these kinds of recordings might be found in our area are bad for preservation, I assumed that a home – with an air conditioner and heater – would work just fine. Not so. Temperatures are kept in the 50s and humidity is carefully controlled, as well.

Founded in 2005, it would be a full eight years before the relationship with the library was formalized in 2013. Eric, who has a MS in Library Sciences from UT, joined the archive in 2012, first as a practicum student and then as an archivist working with the massive – and always increasing – collection of news films, home movies, local music recordings, acetate and wire recordings. About 75% of the collection is centered on Knoxville.

Much of the work is not dissimilar to that of a detective. Sometimes they know the origin and subject of donated film and sometimes nothing is known when it is received. If a family donates film or it is found at an estate sale, the family connection serves as a starting point. Often, however, it may be found at an antique store, such as a particular recent donation.

The first step, always, is getting the material into the archive and stabilizing it so there will be no further damage or deterioration. The two person team of Eric and John Morton, assistant archivist, then begins the process of viewing the film using one of their many projectors and viewers. Imagine needing machines that can read almost any kind of recording software – it’s daunting, and is often also helped by donations. Once viewed, they must determine whether to prioritize the piece for digitization – a decision generally based on age and rarity.

Next comes the cataloging which involves entry into a database and storage. The massive hard drives used to store the files are replicated. One is kept on site and another in an off-site secure location in order to prevent a complete loss in case of a disaster. It’s a process in which only a small percentage of the work gets digitized. John likened it to triage and the two agreed they only make a small dent in the work.

When Bradley left a year ago, much of the institutional memory left with him. It was helpful that Eric worked with him for several years and the importance of having someone familiar with the area has been underscored. It’s much harder to do detective work involving a less-familiar context.

They stressed how valuable film and unique audio recording is to the cultural history of a place. It goes beyond static images and words on a page to offer something more. And the value may not be readily apparent to others. Sometimes the value lies in the clothing of the people in the film or the background of storefronts or any of a number of details. Eric called it the, “Record of vernacular culture not investigated by publishers.”

They are always looking for new footage. While they have local newscasts going way back, raw footage from the Heartland Series (including many hours never broadcast), Cas Walker footage and more that you’d recognize, they’re also looking for personal or home video from the pre-VHS era (though some VHS may be important, as well). They love for people to bring it in and they’ll keep it and preserve it or return it and, if they decide to digitize, will provide the contributor with a digital copy, free-of-charge.

Recognizing the cultural value of home recordings and movies, Home Movie Day started fifteen years ago as an international event to raise awareness of preservation of film and to celebrate home movies. This year’s event, which will be celebrated locally, will be held October 20 and 21.

Weather permitting, a night of home movies will be shown on Market Square, Friday night, October 20. Hoping to build on the momentum of Movies on the Square which ends the week before, the films featured will include a segment of favorite home movie clips focused on Knoxville in the 1920s and 1930s with a live score provided by Kukuly and the Gypsy Fuego. Another segment of Smoky Mountain footage will be live scored by Jason Boardman with Crowmeat Bob and a segment of “Anything Goes,” fun footage will receive a live jazz score by the Matt Nelson Trio.

On Saturday the 21st, events will be held in the East Tennessee History Center Auditorium. It will include screening of home movies brought in by the public. Anyone with film (pre-vhs is preferred) is encouraged to arrive between 11:00 AM and 12:00 AM for the noon to 4:00 PM showing, in order to have their film screened (must be PG 🙂 ). Lots of fun is promised. Favorite home movies from the archives will also be screened and other fun is planned.

Check out their website, give them a like on Facebook and enjoy their Vimeo channel – you may get lost there, once you get started. The video included here is from that collection, with the top video being the oldest known footage of Knoxville and the second being a compilation with music by Todd Steed. Join them for Home Movie Day and consider donated working equipment or, particularly, interesting footage of east Tennessee.