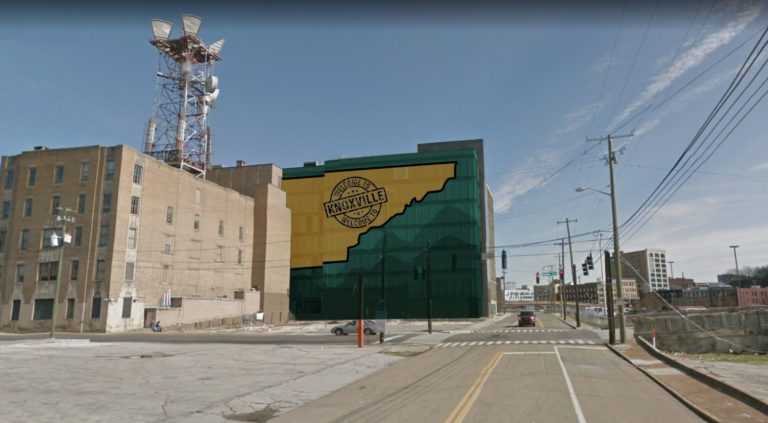 (Ed: Today is the second of a two part series by Oren Yarbrough, architectural intern at DIA.)

In the last article, I described the varied and interesting history of the collection of buildings that today makes up the AT&T complex. If you haven’t yet read the first article I strongly suggest you do so you can get a new perspective on this century old building. Now it’s time to share with you my idea on how we can make this massive concrete cube an asset to the downtown community rather than the eyesore it currently is today.

Murals. Knoxville has fully embraced murals as a valuable beautification tool in the last decade, creating vibrant street galleries where a blighted service alley should be, a 100-year-old historical reference to Gay Street & Market Square where a bare concrete wall should be, and graphic reminders of our musical & artistic past where many a blank party wall was exposed from demolition years ago. Individuals and groups alike, have taken it upon themselves to create beauty in this city in some of the most interesting and forgotten of places.

Knoxville has managed to make street art and murals an asset for the city, both in terms of aesthetic value and tourism. It has now become a common occurrence to see groups of people walking down Armstrong Alley to see the curated graffiti and pose for a picture or two. A year ago, the last thing my sister wanted to do before she flew back to California was pose for a picture with me in front of the massive Visit Knoxville mural on the 300 block of Gay Street. The creation of pieces of art in some of these locations around the city draws people to locations that the public would be otherwise deem unattractive.

It’s my belief that painting the exterior of the AT&T Building is no different than painting Armstrong Alley or placing massive prints on the Walnut Street Garage, aside from the scale being a particularly larger goal to tackle. The good news is, we wouldn’t be the first city to try painting our old concrete cube with pretty images in an effort to revitalize the surrounding neighborhood.

Built in the early 1980’s in a declining neighborhood on the edge of downtown, made up of large concrete panels & towering over the surrounding streetscape, Chattanooga has an almost identical AT&T building as Knoxville. Years ago, city run group Public Art Chattanooga, teamed up with AT&T, The Lyndhurst Foundation, & Benwood Foundation to begin an effort to beautify the Historic M.L. King neighborhood in Chattanooga. The centerpiece of this community beautification effort became a reality with the completion of a 42,000-square foot mural, one of the largest of its kind in the US, that wraps the entire façade of the still functioning AT&T Building.

The mural, titled “The M.L. King Mural: We Will Not Be Satisfied Until”, is a professionally designed and created depiction of Chattanooga citizens from all backgrounds in poses that reflect some of the most famous lines of Dr.King’s “I Have a Dream” speech. The cost of the mural came in at around 200 thousand dollars and the artist, Meg Saligman, worked on it with assistance from local artists for over a year and a half between planning and implementation.

Chattanooga’s MLK Mural is gorgeous for its artistic, social, and architectural merits & stands now as an icon for the neighborhood it rests in. The deep cultural influence and historical background of the MLK Neighborhood played a massive part for the implementation of the mural and Knoxville’s AT&T Building will never have that same connection to utilize or draw from.  What Knoxville does have to it’s benefit is the strategic location of the AT&T building in proximity to many different important roadways passing through the downtown area. Having the AT&T Building almost always within eyesight from the North end of the downtown core, something once seen as a net negative, is a major factor in advocating for this building to be clad with something useful and artistic.

The biggest hurdles in getting a mural on the AT&T Building are approval by the owner and securing the necessary funding to complete the design and creation of the installation. Chattanooga’s MLK Mural proves to us that AT&T’s local Tennessee offices are willing to work with our cities in an effort to beautify blighted areas by decorating their structures. The fact that the immediate neighborhoods off Depot, Magnolia, Broadway, & Central are all starting to attract new retail and residential development makes owner approval seem a more likely possibility now than years ago.

Getting funding for a project of this size will be daunting and honestly all I can do in this article is just throw out some ideas and hope that it gets the necessary conversations started. The actual real decisions for something of the scale and magnitude of the AT&T building would require many players, including the city of Knoxville. One idea for funding could be the request of a grant for beautification from the city, state, or federal government.

Similar to Chattanooga, organizers could team up with private donors and foundations to try and secure a majority of funding for the mural. My initial thoughts would be that the city should have a vested interest in the creation and design of the murals since they will be so highly visible to both residents and tourists alike. I imagine the design, should the city choose to accept a part in the process, would operate a bit like a semi-permanent advertisement for the city & greater geographical area.

Knoxville is trying to increase its tourism numbers in the region and I believe that a large-scale mural in this location could operate much in the same way as other murals around downtown by providing a slight nod to the Knoxville of the past while also embracing something visitors might find unique and attractive about the present. I like the idea of keeping the design simple and safe while also proudly owning up on positive things that Knoxvillian’s universally declare about the city today.

I have done some quick Photoshop exercises to try and give you an image of what the AT&T Building could become and what it could give back to the city. Take what I have created with a grain of salt since this is just my hurried attempt to depict something I think was attractive that projects a positive Knoxville image.

It is my hope that after reading of the history of Knoxville’s “Telephone Building” you were given a new perspective and are proud of the architectural connections this structure shares with other great historic places around the south. It is also my hope that after reading about the real-life actions in Chattanooga, how a community took a similar structure in a similar location of stagnation and urban decay and transformed it into a landmark and an icon to be proud of for decades to come, that you see the potential our Telephone Building could have towards the betterment of a currently blighted portion of downtown.

I hope that all of the readers who find this idea interesting show their support for moving forward with a grassroots effort to put murals on the AT&T Building. Knoxville is expanding and revitalizing neighborhoods that have been stagnant for decades and we have a whole lot to be proud of with our efforts. I think it’s also time to be proud of the Telephone Building again.