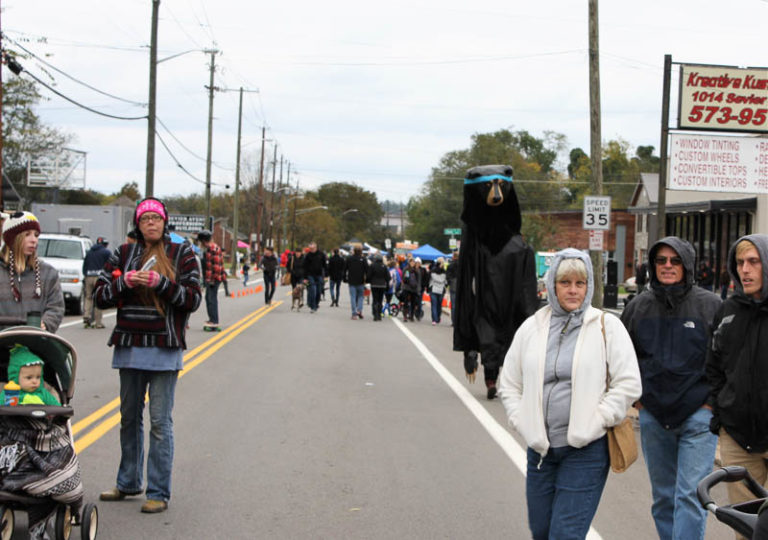 Photos and Story by Heidi Hornick

With yesterday’s temperature never getting above 40 degrees, and the wind chill making it feel like 35, only the hale and hearty would be expected to attend an outdoor event. Open Streets is as much a celebration of a community’s progress as it is an opportunity for the entire city to get outside and move around. Based on those objectives – and despite the cold – yesterday’s South Knoxville edition was a success. Turnout was surprisingly good, with people wending their way from the Gay Street Bridge down Sevier Avenue to Suttree Landing Park.

“We’ve been to almost every Open Streets,” said Bryan Benson of Knoxville, as he played with his daughter in the Alliance Brewery parking lot. “We think it’s great.”

People walked, skated, biked. Most were bundled up in winter coats, hats and gloves. Fires in metal cans were a popular method for staying warm as were the libations at Alliance. Some of the folks manning booths were wrapped in blankets. Live performances and many of the activities were not held due to the weather, but that didn’t stop the people that turned up from enjoying themselves.

South Knoxville is on the ground floor of an inevitable renaissance. Several businesses have opened on Sevier Avenue such as Alliance, Three Bears Coffee, The Landing, Uncle Lem’s Mercantile and Honeybee Coffee Company. The vibe feels much like Market Square did back in 2005. Five older homes sit on a stretch of Sevier, between Claude and Dixie Streets. Four out of the five are renovated or in the process. Near the bridge, several waterfront projects are in full swing. Other developments on the Southside have been completed are planned.