The Parkridge Historic House Tour: A Visit to Some Remarkable Residences 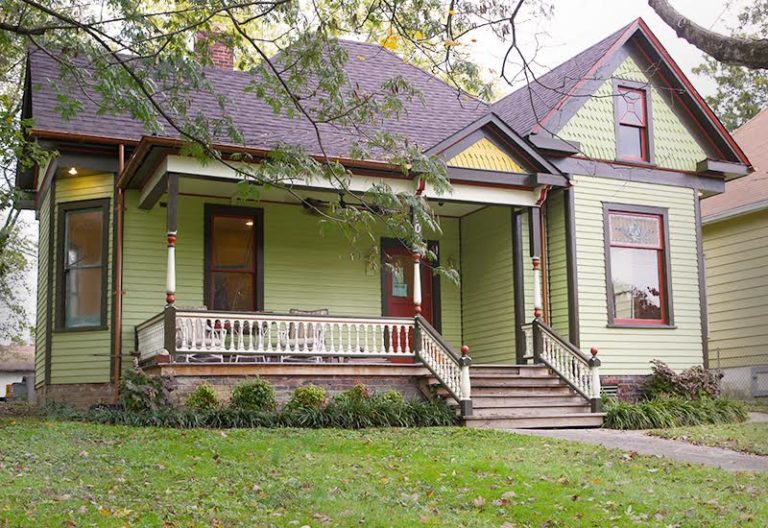 Article by Lee Zimmerman (Lee has written for No Depression, Billboard Magazine, Relix and others), Photos by Doug Finley

A bleak and chilly day in late October may not seem like the most opportune time to undertake a historic house tour, but regardless, when opportunity calls and residents open up their homes for inspection, one ought to feel obliged to take advantage of the circumstance. Granted, on days like this, it’s a challenge to get out of bed, and with the lyrics to that old Simon and Garfunkel song echoing through my head, it seems all the more auspicious.

“A winter’s day, in a deep and dark December.”

Except that this wasn’t December, and fall had barely begun. Only a few leaves were revealing a change in color and with the clouds cast low all afternoon, they barely stood out regardless. Nevertheless, I wasn’t ready to complain, especially since the grayish hue seemed an appropriate backdrop for surveying structures of such historic vintage.

To be sure, Parkridge isn’t one of those stodgy neighborhoods lined with stately mansions or given to an air of detachment that suggests it’s of a rarefied stature. For the most part, it seems solidly working class, and while there’s clear appreciation for its storied history — the area itself dates back to the 1850s when it was a suburban enclave called Shieldstown prior to being subdivided and renamed Parkridge in the latter part of the century — it only hints at the possibility for immediate gentrification. Finding a beautiful home is no guarantee that one’s neighbors will be equally as circumspect when it comes to their own dwellings, one reason why the tour hopscotched across several streets so as to pinpoint the specific stops.

Unsure as to where to begin, photographer Doug Finley and I began our sojourn at the house marked number five on the tour, a boxy dwelling located at 2455 Magnolia Avenue. At first, its most noticeable feature appeared to be its large porch, a handy vantage point from which to survey the activity on the busy commercial road it fronted. In fact, this seemed the only residence in sight, being that it was surrounded on the front and on the side by low rent motels, fast food joints and other trappings of a burgeoning business district.

Originally built in the early 1920s and occupied by a succession of families before being taken over by the department of Children and Family Services, it was purchased by developer John Craig who gave a winning bid during an online foreclosure auction just short of a year ago. Clearly it was a good investment; the natural wood floors, stairs and accouterments give it a vintage presence, while its bedrooms evoke the coziness of hearth and home. The remodeling work is nearly complete, with the kitchen being the only space that remains for renovation.  Standing apart from a wealth of detail, the mail slot in the worn wooden front door adds a personal touch that only the local mail carrier can truly utilize and appreciate.

Figuring it was time to get situated and actually become acclimated to our upcoming adventure, we took Mr. Craig’s helpful advice and went to the Magnolia Avenue Church to check in and get a brochure. As it turned out, it was an excellent stop on its own. Its imposing facade and inspiring sanctuary led us to several congregants who were happy to show us around. A few of the stained glass were bowed and ready for repair, and a damaged portion of the ceiling towards the rear suggested that after some 90 years, this grand building was beginning to feel its age, but those were negligible details intruding on an otherwise inspiring experience.

Though only a small congregation regularly shows up for Sunday services, the church still plays a vital role in the community, offering a free clinic every Monday, free lunches, a free clothing closet and a food pantry for local residents in need. It was a pleasure meeting and speaking with our hosts James, Russ and Christopher, individuals whose dedication to preservation and the church’s mission matched their pride in being part of such a cherished institution. While the church’s chimes no longer ring because the electric generator that runs them need a repair, a ‘60s vintage pipe organ can still be played proudly. Consider this fine church a splendid example of Gothic grace.

Getting ourselves further in gear, we continued our house tour, working our way backwards to what was officially deemed stop number four on the journey. The house at 2520 E. Fifth Street resembled a property belonging to both savvy buyers and individuals with a knack for discerning design. Indeed, it was little surprise that realtor Suzy Trotta and her husband Ray had opted to purchase the place a year ago after Suzy had it her listings but decided to keep it instead.

Within its 2,300 square feet, it boasts natural wood floors, three fireplaces and a spacious sitting room off the upstairs master bedroom. Nevertheless, at the present time, the Trottas have their sights set on the backyard, presently enclosed by a big wooden fence and a sliding metal door that easily accommodates entry from an alley behind the house. Given the walled in environs and an overlook offered by a modern wood deck, it’s no surprise that the couple refer to it as their “fortress.” Still, once the sod is in place, it ought to look a lot more homey, not to mention a perfect party place. With a nearby clock hanging over the neighboring minimart, the hosts will know exactly what time it is when they decide to pack the party up.

The house designated as number three, located at 2041 Jefferson Avenue, was the only home that isn’t currently occupied. In fact, the aforementioned Ms. Trotta and her partner Jennifer Montgomery, the principals in TM Real Estate, represent the property, which was due to come on the market the following day. The oldest home on the tour, it was constructed before the beginning of the 20th century and subsequently divided into individual apartments. Despite the compact design, it boasts three bedrooms, one and a half baths, four fireplaces (the most of any house we saw) and a modern kitchen with contemporary marble counters. A step down bedroom provided an interesting touch, but it was the look of freshly painted walls that gave it a bright and clean appearance overall. Put your bids in now. The place is a steal for $189,900.

Then it was on to official stop number two — remember, we were working our way backwards — and the house at 2027 owned by Jeff and Missy Bloomer. Here we found one of the more impressive abodes of the entire day. At only 1,900 square feet, it was also among the most compact, but the floor plan was ideal for a couple without kids. An adequately sized bedroom adjoined one that had been converted into an office and another being utilized as a sewing room. A coal burning fireplace, faux copper drain pipes and space to expand in the attic — located behind a row of four upper front windows — suggested it was a snug spot indeed. The Bloomers were able to salvage the original wood floor, much of the woodwork and the kitchen cabinetry, keeping its historic elements intact within a contemporary context.

The final stop of our tour was, of course, house number one, a quaint looking Victorian bungalow located at 1907 Washington Avenue. Dating from 1908, the house had fallen into disrepair, but an ongoing renovation that was begun three years ago (and due to be completed in approximately six months) has given the dwelling a fanciful storybook look on the exterior and a decided upgrade for the interior as well.

Family photographs and assorted antique relics belonging to the original dwelling were spread out on the living room table, courtesy of the hostess, Linda Blankenship, who also happened to be the great granddaughter of the home’s last owner. We also met David Nix, the man responsible for the refurbishing. David explained that authentic plaster walls — no drywall here — were still intact and the original wood pine floors, partially overlaid with Oak in the public rooms, were also due to be restored. Boasting only 1,350 square feet, the house will likely become a rental when the work is complete, an ideal home for both students and faculty based at nearby UT.

That then was our tour, a fascinating glimpse into life lived in another era and traditions that are preserved today. What a cool little neighborhood, that Parkridge is and such nice folks who open their homes to strangers. I’m already looking forward to venturing back there next year. And if the weather is anything like it was this year, let’s hope that they keep their fireplaces ablaze.