“Three Sisters” Presented by Clarence Brown Theatre at the Carousel 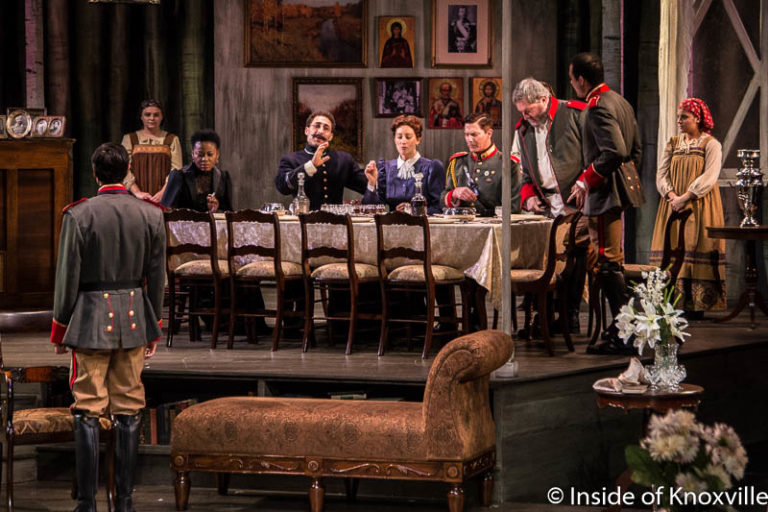 As a part of a spate of Anton Chekhov related events around the city in the next month, “Three Sisters,” the play by the Russian playwright and short story writer has its second preview tonight and officially holds its opening night on Friday. The new version by Libby Appel is directed by Michael Fry and runs through October 15. The small and intimate Ula Love Doughty Carousel Theatre is sure to sell out its run, so tickets should be secured quickly. Opening night is sold out.

Considered one of the great masters of short fiction, Checkhov produced a handful of plays regarded among the best written. As his ambitions expanded, he explored existential questions and challenged his readers, insisting the artist’s job is not to answer questions, but to pose them. Throughout most of his literary career he also practiced medicine.

“Three Sisters,” was written in 1900 and first produced in 1901 in Moscow. Reaction was initially mixed, though it had a successful first run. The writer, himself, also is said to have had mixed feelings about the initial production, feeling the subtleties he intended had been lost. Audiences responded to the isolation and longing in each of the sisters.

The play’s main characters, the sisters, played in this production by Emily Kicklighter (Olga), Lauren Pennline (Irina) and Carléne Pochette (Masha) each are dissatisfied with their positions in life. Having lost their father at an early age, the sisters were forced to leave the grand Moscow life they loved and to which they long to return. The oldest (Olga)  is a teacher, a profession she does not love. She’s also an “old maid,” at 28 and wishes she could have been married. Masha (the middle sister) is unhappily married and Irina, the youngest sister, who is celebrating her twentieth birthday as the play opens, remains idealistic and hopeful as the play opens.

As the sisters make compromises and decisions about their lives and their circumstances change, the play probes questions of the purpose of life and what one might realistically hope for during one’s life and beyond. Chekhov is not interested in tidy or happy endings.

In addition to this excellent production, a number of Chekhov related events are offered in the coming month as a part of the Modern Foreign Languages and Literatures’ program, “ChekhovFest.” In addition to the dramatic production of “Three Sisters,” the Pellissippi State Theatre Program will produce, “Stupid Fucking Bird,” in the later part of the month of October.

The public library will also get into the action with discussions on two consecutive Tuesdays, October 3 and 10, at 6:30 in the Lawson McGhee Library Meeting Room. The conversation will be moderated by UT Professor Natalia Pervukhin, author of Chekhov, The Sense and the Nonsense. You’ll find more detail about this event, “Check Out Chekhov,” here.

It’s heady literary territory, but what better time of year than autumn, when thoughts turn to a more serious, reflective time with the ending of the year and the advent of winter? It’s not for all of us, but it’s a delight for some of us and these are another of the kinds of events that make our city an interesting and stimulating place to live.