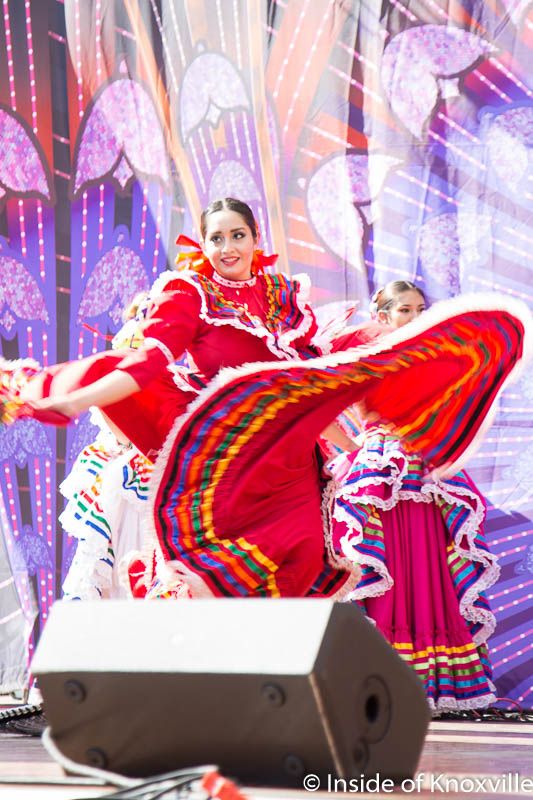 It’s always a fun event. I’ve loved it for years and Urban Girl, and now, Urban Boy have grown up with it. The Hola Festival, in its eighteenth year, has become not only an opportunity for our neighbors to display their Latin traditions, it has become a tradition in many of our families.

In its current incarnation, it started on Saturday night at 7:00 PM, with music and dance (lots of Salsa dancing)  at the Market Square Stage. While last Saturday night will not be fondly remembered in our local sports community, the only emotion on display on Market Square was joy as Jimmy Bonilla and his Orchestra cooked on a Latin beat and the crowds danced and laughed into the night.

Smells of tacos, empanadas, picadillos, pupusas and more filtered through the downtown morning just before the 11:00 opening. People in colorful costumes emerged from every direction as the excitement built. Latin music played over large sound systems blared from each end of the large footprint of the festival.

Vendor booths dotted Market Square, food tents lined Market Street, a children’s area was placed inside the parking lot adjacent to Krutch Park Extension, which was, itself, filled with country exhibits. By 11:30 crowds were building and people began finding a spot to view the Parade of Nations.

The parade itself was comprised of representatives from many of the central and south American countries, as well as Spain. The parade was led a contingent holding an American flag who were followed by Elena from the movie Elena of Avalor. Many country flags and colorful costumes followed. As always, the children drew the biggest reactions for their complete and utter cuteness.

After the parade, our party headed for the food, which was sold via tickets this year, and picked up as much a range of food as we could spot, with most of ours coming from Cuba, this year. We took advantage of having a home base, by taking the food back home for lunch. Urban Boy then crashed for a nap while Urban Girl and I took round two.

One of the fun things about having an older child (she’s eight) at a festival is that she’s getting to the point she’s interested in sitting through performances. The performances at the children’s stage were very good. She watched a science presentation by Dr. Hazari and introduced herself to him afterward for a little science overtime. She loved Kukuly’s set and followed it by having me introduce her to Kukuly who graciously talked to her about the instruments she used.

We watched a little of the ventriloquist and then cruised the country booths before going back to the main stage for some dancing to end our day. Another Hola Festival in the books, we had great conversation on the way home about immigration, cultures and laws. Any day that produces great conversation like that along with tons of fun has to be considered a success.

This, as usual is a small amount of my photos. I’ll post more later on the Inside of Knoxville Facebook Page.